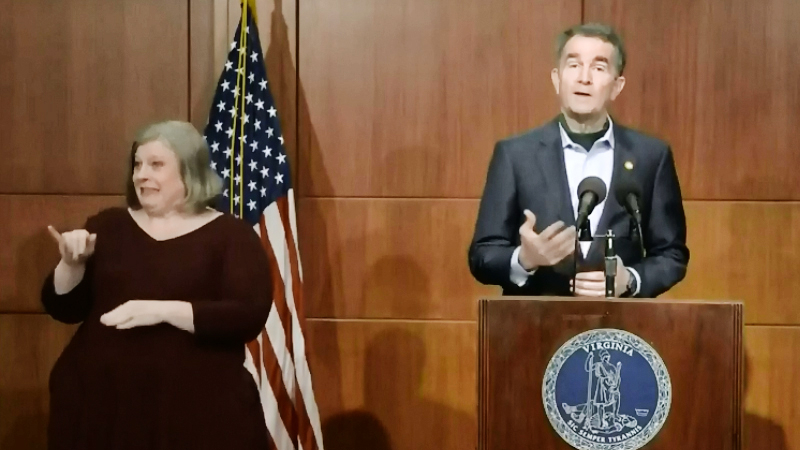 The shutdown of nonessential businesses will extend until May 15 in the District of Columbia and May 8 in Virginia, as leaders warned against letting up on efforts to slow the spread of the coronavirus.

Maryland Gov. Larry Hogan, who already had renewed his business ban for 30 more days until May 10, on Wednesday ordered residents to wear masks when they go out to stores.

The additional restrictions came as Hogan, a Republican, and his regional counterparts cautiously broached the subject of life on the other side of the social shutdown that has gripped residents since mid-March.

"Because of the aggressive actions" the state has taken, Maryland is "seeing cautious signs of optimism," said Hogan. "There is light at the end of the tunnel." He promised to publicly discuss recovery plans beginning next week.

Virginia Gov. Ralph Northam, a Democrat, also credited his state's strict social distancing steps with slowing the rate of the pandemic but added a warning: "When people say it's time to stop what we're doing and go back to normal, they're wrong."

His shutdown of hair salons, movie theaters and other nonessential businesses had been set to expire next week before he extended it, and his stay-at-home order remains in place until June 10.

District Mayor Muriel Bowser, a Democrat, on Wednesday extended the public health emergency that had been set to expire after April 24, requiring residents to continue staying at home, banning gatherings of 10 or more and keeping schools closed through the new date.

The mayor's order also requires people to wear masks or face coverings at hotels, during taxi and ride-share trips, and when selling food. Grocery store customers already were required to do so.

Bowser said the city was already seeing social distancing measures pay off because infections are below what officials originally projected. But she said the city needs more time to flatten the curve and to prevent the health system from becoming overloaded.

The mayor said she has the authority to extend restrictions further if necessary.

"I don't know that that means we are going to be open on May the 16th, but it will be a point for us to check in and if we need to extend it beyond that, we certainly will," Bowser said.

They also added 1,030 new infections, bringing the total caseload across the three jurisdictions past 18,700.

Leaders have been coordinating policies for consistency in reopening society in the greater Washington region, though differences remain. Hogan's order Wednesday about face coverings matches one already in place in the District, while Virginia has not mandated masks. The federal government has recommended masks when venturing outside for grocery shopping and everyday tasks but has not required them.

Northam hailed projections showing that preventive steps will help Virginia's hospitals handle the outbreak for at least two more months, though he continued to call for more personal protective gear, ventilators and personnel - much of which have been diverted to nursing homes and extended-care facilities to handle hot spots there.

On Wednesday, he issued a plea for up to 30,000 non-medical volunteers to support an expected surge of patients across the state. His office and the Virginia Medical Reserve Corps are working with colleges and universities to reach students, particularly those in health and medical degree programs.

Saying he knew the drastic steps to slow the spread of the disease have taken an emotional and economic toll, Northam said planning is underway to consider how and when to begin lifting restrictions. He said he currently has no plan to extend the stay-at-home order beyond June 10, though that could change.

The governor cautioned that restrictions will have to be eased slowly and said the "new normal" will look different from the past.

"That new normal will probably look like, covering your face. Spending more time at home. Teleworking if you can. Continuing to use social distancing, and continuing to stay away from large gatherings," he said.

Hogan said Wednesday that Maryland is still on the uphill side of the fight against the coronavirus, but next week he will begin rolling out a plan to reopen parts of the state economy as conditions allow.

Hogan outlined four things that must be in place before the state could begin lifting stay-at-home orders: a dramatic ramping up of testing, a fully implemented surge expansion in hospitals, the acquisition of sufficient personal protective equipment and a major expansion of the state's contact-tracing workforce.

The state has 250 contact tracers, or disease investigators, and plans to add 1,000 more, Hogan said. Through interviews with infected patients, they can trace everyone who has been exposed to the coronavirus. If more tests were available, all those people could be tested and the full extent of the outbreak would be better understood, the governor said.

He cautioned that reopening society too soon could not only lead to a surge in infections but could ultimately prolong the economic shutdown.

"It is absolutely critical for Marylanders to continue staying home," he said.

As chairman of the National Governors Association, Hogan said he will participate in a conference call with President Donald Trump, Vice President Mike Pence and governors across the country Thursday to discuss the crisis.

He said he has been calling on federal leaders to "put aside partisan politics" and has asked the Trump administration to support governors in getting assistance to fight the pandemic.

Earlier Wednesday, Deputy Health Secretary Gregg Todd told a panel of state lawmakers that Maryland had secured 7 million to 8 million pieces of personal protective equipment - gloves, gowns and masks among them - that he expected to arrive within the next few weeks. Most of the items have been ordered from China, Todd said. He estimated that Maryland currently had about half of the equipment it needs.

In the District, city officials rolled out several new measures to protect against spreading the disease.

The city plans to deploy newly obtained rapid-testing equipment for vulnerable populations, including at the District jail, homeless shelters, nursing homes and for immigrants.

At the jail, where 56 have tested positive and one has died, surgical masks will be provided to all inmates and staff at the facility and temperature checks will be taken upon entry. Inmate movement also will be restricted.

Nursing homes and skilled-care facilities will be required to check residents every four hours and test them if they show symptoms. District nursing homes have reported nine deaths and 78 infections.

The District also disclosed the deaths of four homeless residents, two of whom were not hospitalized.

The city is using five hotels to move people out of shelters, prioritizing high-risk groups such as the elderly and people with chronic medical conditions and anyone showing symptoms or requiring quarantine after close contact with a patient.

Officials across the region continue to wrestle with school closures, and on Wednesday school experts from 16 states announced a regional task force to help chart a path toward eventually reopening them.

The group plans to hold its first meeting next week, and members will also be appointed at that time, officials said.

Coronavirus cases continued to climb around the region. Maryland reported 349 confirmed deaths Wednesday. The state also started reporting "probable deaths," which officials said refers to patients whose death certificates list covid-19 as cause of death but whose samples have not been confirmed by a laboratory test.

If confirmed, the state's 64 probable fatalities would bring the total death toll to 413.

The District added 132 infections and five deaths: three women, ages 45, 69 and 93, and two men, ages 72 and 92. Three-quarters of the District's coronavirus deaths involve patients who are black.

Virginia reported 42 new deaths and 329 new cases. The Henrico health district, the site of the state's worst nursing home outbreak, reported 50 total deaths. In the Fairfax health district, which has 256 hospitalized patients - the highest in the state - 30 people had died.