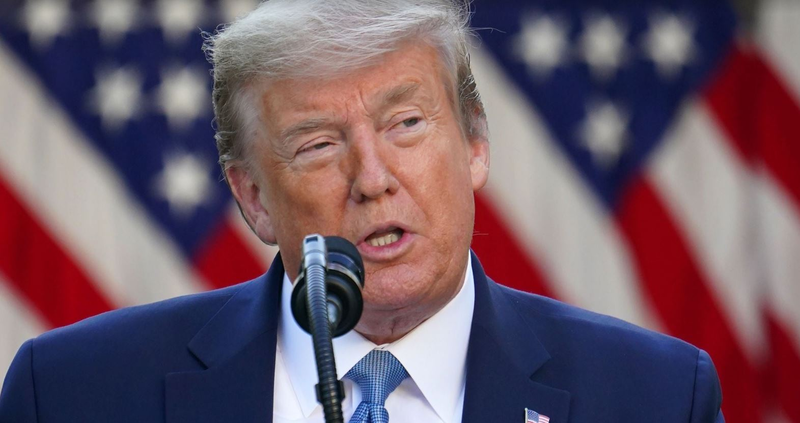 WASHINGTON - President Donald Trump threatened Wednesday to try to force Congress to adjourn so he could fill his administration's vacancies without Senate approval, the second time this week he has claimed unprecedented executive authority amid the coronavirus pandemic.

The president cited a never-exercised constitutional power to shut down Congress if the House and Senate are in disagreement over adjourning, pushing both the executive and legislative branches into uncharted territory.

On Monday, Trump had asserted that he had "total" authority over the decision to reopen the country, overruling governors intent on protecting public health and containing further spread of the coronavirus. He seemed to backtrack Tuesday, suggesting that he would work with the governors on such a step.

"The current practice of leaving town while conducting phony pro forma sessions is a dereliction of duty that the American people cannot afford during this crisis. It is a scam. What they do, it's a scam and everybody knows it," Trump told reporters at his daily briefing on the coronavirus.

Senate Majority Leader Mitch McConnell, R-Ky., spoke to Trump on Wednesday, but signaled that he wasn't on board with the president's plan. Any attempt to formally adjourn the Senate would require all 100 senators traveling back to Washington for such a vote - which McConnell and Senate leaders have deemed an unsafe move at this point.

"The leader pledged to find ways to confirm nominees considered mission-critical to the covid-19 pandemic, but under Senate rules that will take consent from Leader Schumer," said a McConnell spokesman, referring to Senate Minority Leader Charles Schumer, D-N.Y.

McConnell has prioritized confirming lifetime appointments to the federal judiciary, leaving nominees to sub-Cabinet posts, commissions and other posts to languish.

With the Senate now adjourned indefinitely due to the coronavirus, all those nominations remain stalled.

Trump claimed he needed to fill jobs in his administration to deal with the public health emergency, complaining that Senate Democrats blocked his nominations, even though most of the vacancies in the federal government are because Trump hasn't selected anyone to fill them. Several of the ones he has nominated haven't had a confirmation hearing yet in the Republican-led Senate, including Rep. John Ratcliffe, R-Texas, the nominee for director of national intelligence. Trump mentioned Ratcliffe as an example of someone he wanted quickly confirmed.

Article II, section 3 of the Constitution says the president "may, on extraordinary Occasions, convene both Houses, or either of them, and in Case of Disagreement between them, with Respect to the Time of Adjournment, he may adjourn them to such Time as he shall think proper."

Rep. Justin Amash, I-Mich., quickly tweeted that Trump could not take such a step if the House did not vote to adjourn.

"Without one chamber participating in this improper scheme, this action would be unconstitutional. The president has no general, unilateral power to adjourn Congress. He may do so only in the limited 'Case of Disagreement between them, with Respect to the Time of Adjournment,' " Amash wrote.

Rep. Jamie Raskin, D-Md., a member of the House Judiciary Committee who taught constitutional law, said in an interview that Trump's idea of "dissolving an assembly comes out of a dictator's handbook. That's banana republic stuff."

Raskin said no other president has "has tried to force a collision between the House and the Senate to try and indefinitely adjourn one of the houses. . . . That would provoke a true constitutional crisis. The president has just never reconciled himself to the existence of other branches" of government.

Trump suggested that the courts would have the final say.

In fact, in 2014, the Supreme Court sided with Senate Republicans in a dispute with President Barack Obama over a recess appointment to the National Labor Relations Board.

The court ruled unanimously that Obama exceeded his constitutional authority in making high-level government appointments in 2012 when he declared the Senate to be in recess and unable to act on the nominations.

"The Senate is in session when it says it is," Justice Stephen Breyer wrote for the court.

McConnell, then the Senate minority leader, hailed the ruling.

"The President made an unprecedented power grab by placing political allies at a powerful federal agency while the Senate was meeting regularly and without even bothering to wait for its advice and consent. A unanimous Supreme Court has rejected this brazen power-grab," McConnell said.

On Wednesday, House Speaker Nancy Pelosi, D-Calif., did not respond to request for comment. Neither did Schumer, nor House Minority Leader Kevin McCarthy, R-Calif.

Steve Vladeck, a professor at the University of Texas School of Law, dismissed Trump's comments as an empty threat.

"Leaving aside that he probably *can't* do this (because it's unlikely the chambers will disagree), he's not actually going to send Congress home - foreclosing any additional relief legislation - in the middle of a national public health and economic crisis with elections in November," Vladeck tweeted.

Republicans and Democrats rejected Trump's assertion earlier in the week that he had the authority to order states to lift their safety measures.