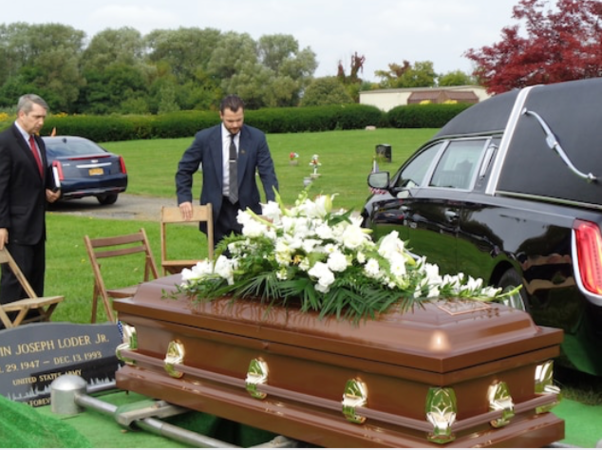 The reburial of Martin Loder in Buffalo, N.Y. Loder had been buried for 25 years on Hart Island after he died of AIDS. MUST CREDIT: Jack Hockett

NEW YORK - Desolate Hart Island, a mile-long stretch of dirt off the Bronx, has taken New York City's unclaimed dead for 151 years: Civil War soldiers, stillborn babies, the homeless, and AIDS patients who were confined to the island's southernmost tip for fear that their little-understood virus might spread from their corpses.

Amid the coronavirus pandemic, the mass-grave burials of indigent New Yorkers whose families could not be found or who could not afford a private funeral have quintupled, officials said, growing to 120 from an average of 25 per week. They're happening five days a week now instead of one. And Mayor Bill de Blasio's office confirmed "it is likely" that people who have died of covid-19, the savage respiratory disease caused by the novel coronavirus, are among those being interred.

It's a preferable alternative, officials said, to the worst-case-scenario plan that Mark Levine, a city council member and the chairman of its health committee, had said via Twitter was in the works: digging up public parks to serve as mass graves. Levine, whose tweet generated alarm and closer scrutiny of the city's finite morgue capacity, later clarified that city officials had assured him the dead would not be put in parks. (Prominent parks around New York City were the sites of mass graves during previous pandemics.)

Drone videos of Hart Island have shown fresh trenches dug with bulldozers, and people wearing white hazmat suits lifting coffins from forklifts and stacking them in two long rows, three coffins atop one another.

The caskets are the same as they've been for decades - simple pine boxes unadorned but for a name or "unknown" written in permanent marker and a grave number carved on the lid. The bodies are unembalmed, often buried with personal effects they had when they died. As usual, each plot contains around 150 coffins.

What's different, though, is who's inside.

With hospitals storing bodies in refrigerated trucks, funeral homes overwhelmed, and the city's death toll rocketing past 10,000, the Office of the Chief Medical Examiner has declared that anyone who is not claimed from a morgue in 15 days will be buried on Hart Island. Typically, the medical examiner has held bodies much longer. The declaration means that anyone who has died of covid-19 (or other causes) and whose family could not make arrangements in time could be bound for the trenches. Perhaps permanently.

Under normal circumstances, Hart Island averages 1,200 burials and 30 to 40 disinterments a year. The hope, city officials said, is that the families of those buried there during the pandemic will disinter their loved ones once things calm down. Disinterment is paid for by the city but reburial, which requires extensive paperwork and coordination with a licensed funeral director, is not.

Faced with those costs, families often decide to keep their loved ones buried on Hart Island. Dozens if not hundreds of bodies from the AIDS crisis are still unclaimed and unidentified decades later.

"Unclaimed doesn't mean unwanted," said Melinda Hunt, director of the Hart Island Project, a nonprofit organization that advocates for telling stories of the dead and reuniting them with their families. "Unclaimed means a funeral director didn't pick up the body." Her website lists every known name connected with a burial plot, a clock counting down how long they've been unclaimed, and any stories families have submitted to her starting in 1980.

Today's system, Hunt said, at least is more transparent than in the 1990s, when names were written in large letters on the sides of coffins and records weren't available to the public. These days, each coffin is carefully numbered with its exact location marked in a leger.

The crisis of all these corpses and what to do with them certainly stems from the pandemic, but also is related to sepulcher laws - or the rights of next of kin to retrieve their deceased loved ones - which "are very, very strong in New York state," Hunt said. The state does not allow for the cremation of unclaimed human remains, said Hunt, which means that "any human remains that are not transferred to a private funeral director have to be buried."

Up until April 3, the undertakers were inmates from Rikers Island, the city's principal jail complex. Paid contractors from a landscaping company have been burying the bodies for the past week, following a public outcry about inmates being exploited for cheap labor while the impossibility of social distancing in incarceration makes them extremely vulnerable to catching the virus.

In the century and a half the Department of Correction has managed the island, it has consistently been where the city has hidden its ostracized, housing at times black Union troops who trained there, an asylum, and quarantine stations for yellow fever and tuberculosis. The buildings with holes in the roof are from a tubercularium and a prison cell block that became the founding facility of the Phoenix House drug rehab center, closed in 1977. Irish-born Mary Mallon, known at the turn of the last century as "Typhoid Mary," and New York City's first baby to die of AIDS are the only individually marked graves.

Hart Island, a seven-minute ferry ride from the seaside town of City Island, was completely closed off to the public until 2012, with the exception of church groups. Even now, applying to the Department of Correction and requesting permission is the only way to set foot on it legally. Some use small boats to sneak on, though, resulting in vandalism to the abandoned buildings and the graves. "I've been told it was a rite of passage for City Island teenagers to go out there," Hunt said.

Close relations of those who are buried on Hart Island may be escorted to the white-painted concrete markers at each plot. Members of the public who are DOC-approved usually must stand on a gazebo and look out at the field. This may all change when management is handed over to the city's parks department next year.

The lack of access, coupled with prison labor and the image of mass graves as undignified pits where bodies are dumped, has led to an unshakable stigma. "Being buried out there was thought of as a shameful way to be buried," said Thomas Laqueur, author of "The Work of the Dead: A Cultural History of Mortal Remains." "They were buried by prisoners, the rejects of society, and then off limits. Over the years, it became a place where the dead were isolated and you couldn't visit them, and people taking care of them were not people who were thought would deal with them with the respect as they should."

A ghoulish fascination has built up around the island. As the largest municipal cemetery in the United States, it has an estimated 1 million-plus underfoot. Erosion of its shoreline during 2012's Hurricane Sandy exposed buried skeletons along the beaches. The restoration of the shoreline was supposed to start this year, but has been halted by the coronavirus. So the reason one might still find bones on the beach is the reason more bodies are being buried.

"It's like being on a different planet; it's just a ghost of an island," said Saxon Palmer, an actor, food delivery worker and former inmate at Rikers who spent four months at the end of 2019 on work detail at Hart Island, burying adults on Thursdays and stillborn babies on Fridays. Sometimes they would also bury dismembered limbs.

Tales abounded on the cellblock of prisoners who had taken Hart duty and gone insane. He described days when the pine boxes would break and the body bags would leak. But he also spoke of a beautiful stillness, and of deer and raccoons twould eat out of his hands.

The current day laborers on Hart have full personal protective equipment. But, Saxon said, "We'd be lucky if we got gardening gloves."

Sometimes as the ferry would pull in at dawn, the island would be shrouded in fog, Palmer said, describing the memory as "terrifying." He's writing the script for a zombie movie inspired by his experience of prisoners trapped on an island filled with the dead.

Despite the stigma - and the indelible stench - that came with the job, Palmer said he and his friend developed ways to honor the dead they placed in the trenches. They'd ask their corrections officers to switch the portable speaker from drum and bass to Mozart, particularly during the heartbreaking hours they spent burying pine boxes the size of shoe boxes that were carrying babies.

As they moved the coffins out of the coroner's truck, they'd say "rest in peace" or draw a cross on the pine box, or say goodbye. "We'd say, 'Mr. Rothman, this is going to be your last trip here, we're going to make it easy for you, nice and slow,' " said Palmer. "We just had a conversation with the coffins in a kind of gentle way."

Months before the virus came, during Palmer's first day on the job, his team exhumed the body of a Vietnam veteran who had been buried unclaimed for 25 years. His name was Martin Loder and his exhumation had been the result of two years of dogged persistence from an Army buddy, Jack Hockett of Newark, Delaware, who had spent six months running around Manhattan with Loder on their weekend furloughs after they were drafted in 1970. They were 22 then, and sure they were going to die. Then they lost touch forever.

Hockett, 73, went on to be a clinical researcher in pharmaceuticals. Loder became an intravenous drug user, homeless and, like so many on Hart Island, died of complications from AIDS. Hockett transported him to Loder's hometown of Buffalo to bury him in the same graveyard as his mother.

"He was a unique person and someone that was very good to me," Hockett said. "I want my friend to be remembered. I don't want him to fade into obscurity."

Hockett grows sad thinking of the people who are dying alone as Loder did. He couldn't go back and help him when he was alive. What he could do, though, was pull him out of the trench.