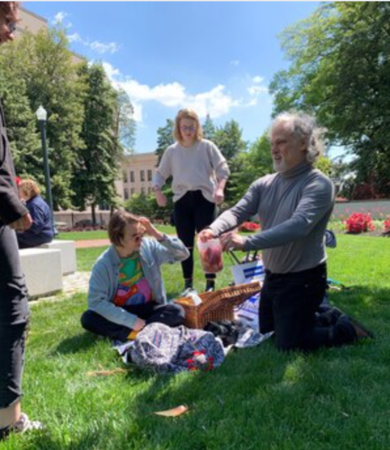 RICHMOND, Va. - As acts of civil disobedience go, this was pastoral: Gary Golden spread a blanket on the grassy lawn by Virginia's Executive Mansion, opened a wicker picnic basket and offered strawberries to strangers.

As fellow protesters took him up on the offer Thursday, coming up to the edge of the blanket, sticking their hands right into his container of sliced berries, Golden was defying Gov. Ralph Northam, who has ordered Virginians to keep their distance from one another to slow the spread of the novel coronavirus.

Golden, a 55-year-old from Fredericksburg whose insurance business has suffered from the crisis, suspects that the social distancing mandates are an unnecessary burden - and a moneymaker for hospitals.

"Society's shut down and locked down so that the hospital systems don't have to invest more and care for their patients," said Golden, who had a model of the coronavirus, crocheted out of yarn, attached to a backpack. "And they're clever because the government's doing it for them now. The government's saying, 'Here, we'll bring in the Army, we'll bring in the National Guard, we'll build this for you, we'll do that for you.' These hospitals are making out."

Golden was one of about 50 people who came to Richmond's Capitol Square about midday to protest restrictions that Northam has imposed since the coronavirus first was diagnosed in the state. It was a much smaller - and less vocal - version of a demonstration staged a day earlier in Lansing, Michigan, where thousands of drivers created a traffic jam intended to pressure Michigan Gov. Gretchen Whitmer, a Democrat, to ease restrictions there.

Northam, a Democrat, has shuttered schools for the year, restricted restaurants to carryout or delivery service and ordered Virginians to stay at home except to get essentials such as food, medical care or exercise. Republican leaders in the state House and Senate have been generally supportive of his actions. But after Northam extended some closures this week, they called on him to give more consideration to reopening businesses.

"Governor Northam will continue to make decisions based in science, data, and public health," Northam spokeswoman Alena Yarmosky said in an email. "He is grateful to the millions of Virginians who are taking this seriously and working together to protect themselves, their families, and their communities. As a doctor and as governor, his top priority is and will continue to be keeping Virginians safe."

The demonstration - advertised on Facebook group sites such as ReOpen Virginia - kicked off about 11:30 a.m. Capitol Police closed entrances to the square at 11:46 a.m., said spokesman Joe Macenka, who counted about 50 protesters. There was probably an equal number of media members, and there were significantly more police, though Macenka said it was policy not to discuss how many had deployed.

Officers stood across the front fence of the Executive Mansion, while others were arrayed around the gathering of protesters, occasionally walking through and asking groups to spread out to follow the governor's guidelines that require people to stay six feet away from one another. Family groups were allowed to stay together.

Other clusters of Capitol Police, all wearing masks, stood at the blocked-off entrances around Capitol Square, not letting anyone else in.

"They've been orderly," Macenka said, about an hour into the protest.

Apart from the police and TV cameras, most of the event looked like a picnic. Families spread blankets on the ground and ate lunch near a civil rights memorial honoring Barbara Johns and her effort to integrate public schools in Farmville. Others sat on folding chairs in the shade.

A few carried signs. "My Body, My Choice to Work," read one; "Stop the madness - it is just a cold virus," said another. Almost none of the protesters wore masks.

"We're here for the picnic," said Will Nesbitt, 54, of Alexandria. He and his wife, Julie, had a seat on a bench near the Barbara Johns memorial and a plastic container packed with food.

But it was a picnic with a message aimed at Northam's orders shutting down the economy and restricting social interaction. "I think that civil rights are important," Will Nesbitt said. "If the governor gave me information and asked me, convinced me to do something and treated me like an adult, I might be willing to do what he says. But I think it's outrageous that without passing any laws he just by decree tells me what I can do."

He said he has looked at the data about the coronavirus on the Virginia Department of Health website but doesn't feel the disease is any worse than the usual influenza outbreak that comes around every year.

The coronavirus has a significantly higher death rate than seasonal flu, according to the World Health Organization. It also is far more contagious. Experts say the danger at nursing homes has been so great because the clients can't be far enough apart.

Nesbitt said that if the elderly are more vulnerable, it doesn't make sense to shut down the entire economy to save them. "If we can ask young men to go to the desert . . . to die for America, why can't we risk old people?" Nesbitt said. "Because this country will be flattened if people aren't allowed to make an income and feed themselves."

The real victims, he said, are the middle class. The poor will still be poor after the pandemic and the rich will still be rich, he said. "But everybody who's trying to pay their bills, every small business - they will be obliterated. And that has long been a goal of the socialists in this country."

As in Michigan, where flags showing support for President Donald Trump were on display, some Richmond demonstrators backed the president, who has been eager to lift restrictions and has said he has "total authority" to reopen state operations.

Scott Moffat, 67, sporting a red Make America Great Again cap, called the virus a "hoax." A part-time pastor at Faith Baptist Church outside Richmond, he said his family has taken a financial hit. His wife got laid off from her job offering food samples to shoppers at Costco, a practice not considered safe during the pandemic.

"I have the right to choose to go out if I choose to expose myself. It's my body," said his wife, Susan Moffat, 74, who said she had trouble squaring Northam's public-health orders with his support for abortion rights. "It's funny how you trust people to kill a baby but you don't trust them to leave their home."

Tarus Woelk, in a star-spangled hat, said she'd never attended a political demonstration before. What drew her out this time was the loss of her job as a long-term substitute teacher at Glen Allen High School. She recalled how diligently she'd worked to protect students before classes were called off.

She was one of the few protesters who'd come equipped with a mask, something Northam has urged Virginians to wear in public but has not mandated.

"It's allergy season," she said. "The only part I like about the mask now, it helps with the pollen."