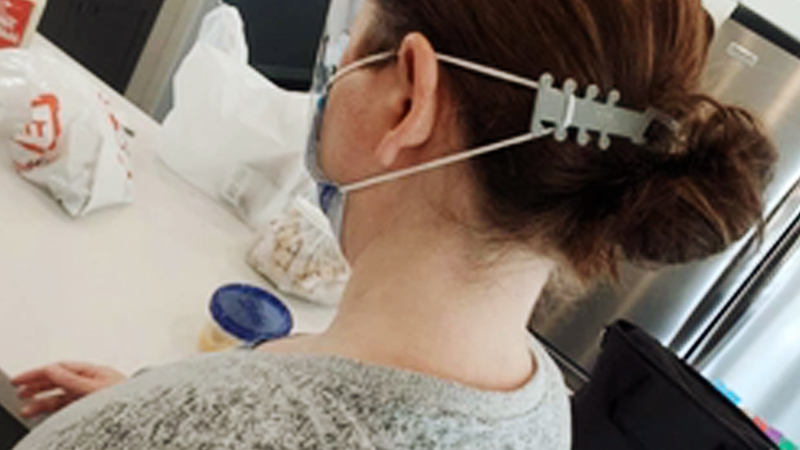 For weeks, photos have been circulating online of the many weary doctors and nurses with marks and bruises on their faces from wearing tight-fitting medical masks while helping covid-19 patients.

Quinn Callander, a seventh-grader from Canada, saw the photos, and then he saw a plea from Canadian hospitals to create ear guards - devices that help relieve some of the pressure felt by health-care workers on their ears and faces.

Quinn, 13, found a design on the internet and thought he'd crank out a few dozen on the 3-D printer he received for his birthday last year, and that would be that.

But on April 3, his mother, Heather Roney, posted a couple of photos of her son and his ear guard project on her Facebook page. Soon, requests came flying in.

Roney, of Maple Ridge, British Columbia, was suddenly inundated with people who wanted to order the free protectors or make them on their own for medical workers in their communities. Her post was shared more than 462,000 times.

"Quinn's printer is now going 24/7 and he's made more than 500 to send to people all over the United States and Canada and around the world," said Roney, 44, who works with hearing aids and people who need them in the Vancouver area.

People around the world took notice of Quinn's project, and many of them commented on her Facebook page.

"These are amazing!" wrote a medical assistant from Michigan. "I saw a co-worker wearing one on Friday and snapped a picture because I had to find one! Thank you for making these! They are very valuable to keeping us comfortable & masked."

"I'm a health care worker and the backs of my ears get raw and sore from masks," commented somebody from Ontario. "Could I get some from you guys for myself and my co-workers?"

Roney said the demand has been enormous.

"It's something that is so needed right now," she said. "They're making a huge difference for people who are having to wear masks all day during long hospital shifts."

Quinn, who has been involved in Scouts Canada since he was 5, started making the ear guards as a Scouting project. He requested a 3-D printer for his birthday last year because he wanted to make woggles, the device to fasten his Scout neckerchiefs, he said. His parents lead his Scout troop.

"I fell in love with 3-D printing when our new vice-principal at school bought a 3-D printer and started letting students learn all about it," he said.

After his mom showed him the social media post about hospitals that were hoping to create devices to keep doctors and nurses comfortable while wearing masks, Quinn did some research online and decided to program his printer to produce a simple strap from the website thingiverse.com.

The gadgets wrap around the back of the head and can be connected to mask straps on each side, enabling wearers to adjust their masks and keep the straps from rubbing against the back of their ears.

After Quinn had printed several dozen, he and his parents arranged for a hospital worker to pick them up from their front porch. Then Quinn programmed his printer to produce them 24/7.

"My printer makes about eight of them every four hours, and it's pretty cheap to make them - about nine cents each," he said. "To me, this is something important I can do to help give back to people who are spending their time saving lives and trying to slow down the pandemic."

It isn't the first time that Quinn has felt compelled to take action for others in need.

At 7, he opened a lemonade stand to help pay for the surgery of a friend with cerebral palsy, Roney said.

"I posted about it on my Facebook page for my relatives, thinking he'd be lucky to raise $1,000, and he ended up going viral and raising $61,487," she said. "Quinn's our only child, but he always keeps us on our toes. He's always been a hands-on kid."

His father, Freddie Callander, 48, attributes that to "the fact that as a family we feel it's our duty to help people."

During a telephone interview, Quinn's mother asked him: "What do you tell people when they say you're too young to make a difference?"