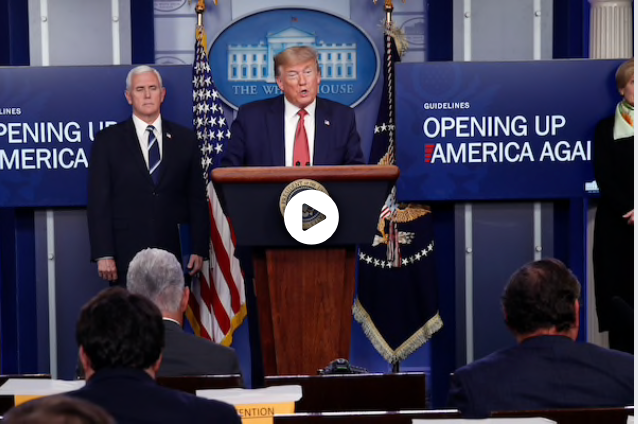 WASHINGTON - President Donald Trump released federal guidelines Thursday night for a slow and staggered return to normal in places with minimal cases of the novel coronavirus, moving to try to resume economic activity even amid an outcry from political and health leaders about the nation's testing capacity.

Despite Trump's desire for a May 1 reopening, his plan does not contain a date for implementation and is a vague set of recommendations for a three-phased reopening of businesses, schools and other gathering places in jurisdictions that satisfy broad criteria on symptoms, cases and hospital loads.

The plan effectively reverses Trump's claim earlier this week that he had "total authority" to declare the nation reopened. The federal guidelines shift accountability to governors and mayors, placing the onus on them to make decisions for their own states and localities based on their own assessments of the coronavirus's spread and risk of resurgence.

"You're going to call your own shots," Trump told governors on a conference call Thursday, a recording of which was obtained by The Washington Post.

The White House guidelines are far less detailed than public health guidances drafted recently by the Centers for Disease Control and Prevention and the Federal Emergency Management Agency and sent to the coronavirus task force.

Trump's the-buck-stops-with-the-states posture is largely designed to shield himself from blame should there be new outbreaks after states reopen or for other problems, according to several current and former senior administration officials involved in the response who spoke on the condition of anonymity to discuss internal deliberations.

Governors have said one of the most important factors in making those determinations is testing data, but Trump's plan does not contain a national testing strategy. Senior administration officials said that although the federal government will try to facilitate access to tests, states and localities will be responsible for developing and administering their own testing programs.

Leaders across sectors, from elected officials to business executives to public-health experts, have amplified warnings this week that the nation is not ready to reopen in part because its testing system is woefully inadequate.

So far, about 3.3 million people have been tested in the United States, according to the Covid Tracking Project, at a rate over the past week of roughly 146,000 people per day. While that is a significant improvement from early testing stumbles, it is still far short of the millions of tests per day experts say is needed to begin safely reopening the economy in a nation of some 330 million.

Trump claimed that the United States has "the most advanced and robust testing anywhere in the world," but the data show other countries, including Germany and South Korea, tested far more people per capita early in the outbreak, which helped them contain cases and deaths. Germany, with about a quarter of the U.S. population, has been testing 350,000 people per week, one reason Chancellor Angela Merkel decided to begin gradually reopening her country next week.

"It is the single best tool to inform decisions and to calibrate all of this," New York Gov. Andrew Cuomo, a Democrat, said Thursday of testing. "This has to be figured out. I understand that this is a problematic area and the federal government's not eager to get involved in testing. I get that, but the plain reality here is we have to do it in partnership with the federal government."

Cuomo said he was proud that New York had tested 500,000 people in 30 days, but noted that is a fraction of the state's 19 million residents, nearly half of whom are workers. The state worked with laboratories to develop and process tests, and the federal government was not a player, according to a senior New York state official.

Sen. Amy Klobuchar, D-Minn., whose husband, John Bessler, was tested for the coronavirus and waited six days to get his results - he tested positive and has since recovered - said in an interview that she has been "obsessed with this from day one." Absent a vaccine, she said a broad and comprehensive testing program is the only way to bring the economy back to its full potential.

"You don't have to be an infectious disease doctor to figure out that the testing is going to be the gateway to making people feel safe and comfortable going out and reopening the economy," said Klobuchar, who was among several senators who raised the issue on a conference call Thursday with Trump. "It is really hard for people to know if they can go back to work or customers can go into stores unless we have that testing."

There is no national testing strategy, but rather a patchwork of programs administered by states with limited federal guidance. Federal officials are still getting requests from private laboratories for help obtaining the necessary reagents to conduct tests, a person involved in the task force said. Meanwhile, the American Hospital Association has raised concerns with the administration about a lack of testing supplies.

There also is no single administration official working on testing. Deborah Birx, the White House coronavirus coordinator, has been communicating with hospitals and states about testing protocols, while Jared Kushner, the president's son-in-law and senior adviser, has been running point with the industry.

The government has been unable to compel test manufacturers to dramatically increase the number of tests produced, and Trump has been unwilling to invoke the Defense Production Act for that purpose. States are also still struggling with acute supply shortages for tests, including swabs and reagents, that Washington has not addressed.

The lack of a federal strategy could mean jurisdictions with greater access to supplies and tests could reopen first, as opposed to areas with the lowest risk, said Ashish Jha, a professor at Harvard University and director of the Harvard Global Health Institute.

"It's not going to be solvable by letting the market sort itself out or letting every state and company compete with each other," Jha said. "You really are going to need federal coordination and federal strategy."

For the last several weeks, health and other administration officials had been discussing having most workers tested for the virus before they returned to work, both to protect businesses afraid of becoming the sites of large outbreaks and to quickly identify and isolate infected people to prevent another wave of cases. But in the last few days, the strategy has morphed to prioritizing four key groups: health-care workers, food safety workers, those in nursing homes and people with chronic diseases - which would still amount to testing millions of people.

The new strategy was driven by a realization that it would be impractical to test everybody, as well as a lack of available tests, said a senior administration official involved in the strategy.

The guidelines Trump unveiled Thursday suggest that, before reopening, states should first have a "robust testing system in place for at-risk health care workers," see a decrease in confirmed covid-19 cases over a 14-day period, and hospitals should be able to "treat all patients without crisis care" before proceeding to a phased reopening.

Trump has been advised by a number of political allies, as well as medical experts, that there needs to be significantly more testing before the country reopens.

Yet Trump routinely brags about how many tests already have been completed and complains about dire economic projections. The president is "determined to reopen the country. Testing is just not his primary thought," according to one of his advisers, who spoke on the condition of anonymity to be candid.

On the conference call Thursday with governors, Trump played down the significance of testing.

"Testing is very interesting," Trump said, according to the audio recording obtained by The Post. "There are some states where I think you can do with a lot less testing than other people are suggesting." He told the governors that they have "a lot of leeway" in determining how many tests they conduct.

Trump has heralded a new rapid-response test from Abbott Laboratories that can deliver results in as few as five minutes, and has taken pride in his administration's role helping distribute the machines nationwide. But when Montana Gov. Steve Bullock, a Democrat, said they got the "great Abbott machines" two weeks ago but still don't have testing kits required to use them, Trump replied that the states are "going to lead the testing."

Only a fraction of the Abbott tests are being used right now because there are not enough skilled technicians around the country to operate them - a challenge officials know will continue to persist as testing ramps up - according to a senior administration official involved in the response.

On a separate call Thursday with senators, some Republicans shared Trump's enthusiasm for reopening the stalled economy.

"There's no way we're going to be able to test comprehensive enough and with enough confidence where it would assuage the fears of people who want that in place before you reopen the economy," Sen. Mike Braun, R-Ind., who was on the call, said later in an interview.

Some Democrats were alarmed by this view.

"We need to do this in a methodical way and not just rush forward and put lives at risk," said Sen. Tammy Duckworth, D-Ill., another participant.

Serology tests help identify antibodies that indicate some level of immunity to covid-19, the disease caused by the novel coronavirus, and could help identify people who can safely return to the workforce. Some experts have warned that they are not the panacea many are hoping for because it's likely only a small percentage of the population has been infected.

While there are numerous serology tests on the market, none so far have received FDA approval and officials have warned that many of them are made in China and inaccurate. The doctors group is drafting a plan that includes having an FDA-approved serology test in the coming weeks that could first be used for workers who have been most exposed to the virus, including health-care workers and first line responders, and eventually expanded as availability increases.