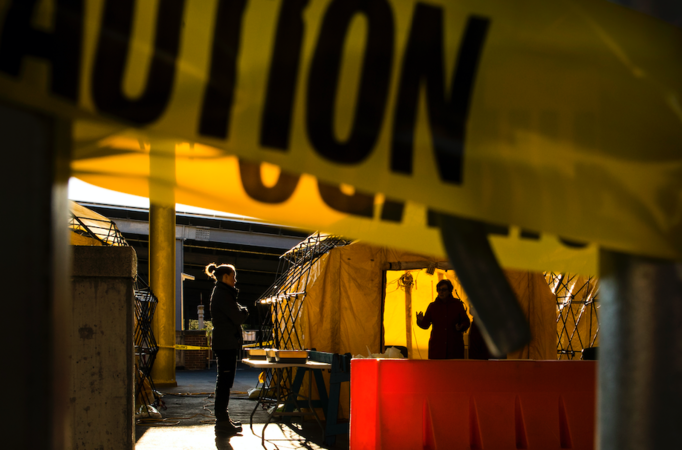 With the number of the covid-19 tests hovering at an average of 146,000 a day, businesses leaders and state officials are warning the Trump administration that they cannot safely reopen the economy without radically increasing the number of available tests - perhaps into the millions a day - and that won't happen without a greater coordinating role by the federal government.

Though the capacity of private business to produce those volumes remains unclear, state leaders and health experts say that the administration should move with a greater sense of urgency and could do several relatively easy things to speed the production and distribution of tests.

On Friday, the American Association for Clinical Chemistry said there were still critical supply chain issues that stand in the way of ramping up testing, including a lack of protective equipment for technicians who run the tests, and a shortage of swabs and reagents - chemical solutions required to run the tests.

"The only entity in this crisis with the power to source the necessary supplies on a large scale and route them to those areas where they are most needed - whether an N95 mask, testing reagents, or a testing swab - is the federal government," Carmen Wiley, the group's president, said in a statement. "The White House must continue to do the work only they can do: Find and coordinate resources so that physicians, nurses, laboratory professionals, and others can do their jobs."

This week the federal government took one step private industry has been seeking - Medicare doubled reimbursements from $51 to $100 a test, making covid-19 testing profitable for labs. A key adviser to California Gov. Gavin Newsom, a Democrat, estimated that the move would increase profit margins from negligible to 50 percent.

On Friday, more than 130 members of the Republican House leadership held a conference call with Health and Human Services Secretary Alex Azar and several other top administration health officials. After a group prayer, the officials fielded questions about the slow pace of testing and supply shortages, but reiterated that it's ultimately up to states and localities to work with test manufacturers to get their supplies.

Joshua Sharfstein, vice dean at the Johns Hopkins University school of public health, said "Our health care system is not designed to respond to crises." The former deputy commissioner of the Food and Drug Administration also noted that labs are in insurance networks, physicians have referral relationships, and some people don't have any good access to health care at all.

"Coordinating testing capacity is not something our health care system does naturally," he said.

One senior official in the diagnostic testing industry said companies have the capacity to produce more tests and test kits. Another industry official said 20 million to 25 million tests could be churned out this month. But that doesn't mean the nation has the capacity to either administer such a large number of tests, or process them to get the results. Both spoke on the condition of anonymity because they were not authorized to speak about the matters publicly.

Neil Bradley, executive vice president and chief policy officer of the U.S. Chamber of Commerce, which has been talking to White House officials, said that large employers would provide testing for their employees, but that smaller firms would struggle to find experts, testing spaces, financial wherewithal and ways to respond once someone tests positive. "A lot of employers are not happy about being health care providers and don't have the capacity," he said.

Meanwhile, hospitals and labs said they are still grappling with shortages of swabs and reagents that are needed for the diagnostic tests. And members of the administration, including Deborah Birx, White House coronavirus response coordinator, said many of the tests from Abbott Laboratories that are able to process hundreds of results at a time are sitting unused in hospitals and labs around the country because there aren't enough technicians to operate them.

In a letter this week to Birx, David Skorton, president of the Association of American Medical Colleges, expressed frustration that lab directors and hospital chief executives were "working day and night to expand testing capacity but are severely hampered by shortages of needed reagents, swabs for testing, PPE and specialized equipment designed by companies to be used with their own machines."

Skorton, whose group includes Department of Veterans Affairs hospitals as well as 400 teaching hospitals, said that "while collection swabs can be used across tests, because each test requires its own specific reagents, many labs have worked to diversify the platforms they are running so that a shortage in one set of reagents will not halt testing entirely." Often his members are told by suppliers that the federal government was being given higher priority.

So far, state governments have been taking the lead in trying to secure supplies, but the level of testing among members of the American Clinical Laboratory Association, the private labs, was 28 percent lower than during the first week of April.

In addition, there are substantial inequalities in the distribution of testing kits. A Virginia doctor was reaching out to asymptomatic patients to take a serology test as part of a study. And in Los Angeles, Mayor Eric Garcetti, a Democrat, said in a tweet Friday that the county has 30 testing sites and urged people to get tested immediately. "We have the capacity -- don't wait, wonder, and risk infecting others."

But in other parts of the country, people were having trouble getting access to testing, especially African Americans, health care professionals and residents from nursing homes and assisted-living facilities.

The fact that testing is failing to capture the actual spread of the coronavirus is clear from data coming out of states like Connecticut, which now has an alarming 6.1 percent case fatality rate and is receiving positive results on 30 percent of its tests.

In an interview Thursday, Sen. Chris Murphy (D-Conn.) acknowledged that these numbers suggest that testing has only captured a small share of the outbreak in his state. He noted that state officials decided early on that given the shortage of available tests, people who were experiencing coronavirus symptoms but were not gravely ill "would be better off staying home and taking care of themselves, rather than going out for a test."

"Right now we don't have enough tests to be able to test every single person who's symptomatic," Murphy said. "We simply don't have the tests to do what our public health experts would recommend."

A similar phenomenon has cropped up in southern Michigan, where roughly 40 percent of people in Detroit and the surrounding suburbs are testing positive. While the state has recently expanded its testing criteria to include less severe cases, Teena Chopra, associate professor of medicine at Wayne State University's division of infectious diseases, said that the effort is still not broad enough to help inform her and other public health experts in the state.

"I would like to see their testing expanded to everybody, even those who are asymptomatic," Chopra said. "When you're not testing enough, you're not able to contact, trace and isolate, identify and quarantine. You keep doing that until you reach a zero."

There is one small-scale effort starting Sunday that aims to get a more representative sample of asymptomatic Americans, in Corvallis, Oregon. There, Oregon State University researchers working with the Benton County Health Department aim to go door-to-door each weekend over the course of the next month to randomly selected Corvallis neighborhoods and collect samples from 960 people.

"We are flying blind in many ways because we do not know how many people are infected with the virus and how that is changing over time," said OSU professor Ben Dalziel, who is leading the project. "Right now, we are managing the pandemic mostly looking in the rearview mirror. We need to be looking forward, and that's what this study will help allow."

In Fairfax, Virginia, internist Eileen West has been reaching out to patients without any symptoms and asking whether they'd like to take the blood test for covid-19 antibodies. West is running a study with Lisa Larkin, co-founder of Ms. Medicine, a nonprofit based in Cincinnati. West was given 400 tests made by a reputable Chinese manufacturer and so far has administered 85 of them. Just three people have tested positive.

"We have a lot we don't understand yet but if we want to move forward and open our economy up again, we have to understand the frequency of asymptomatic infections and get more understanding about the antibody response in those who are asymptomatic," she said.

"This is only a piece of the puzzle," she said. "We have a lot more to learn," she said, adding that she was eager to do "anything we can do to push the needle forward."