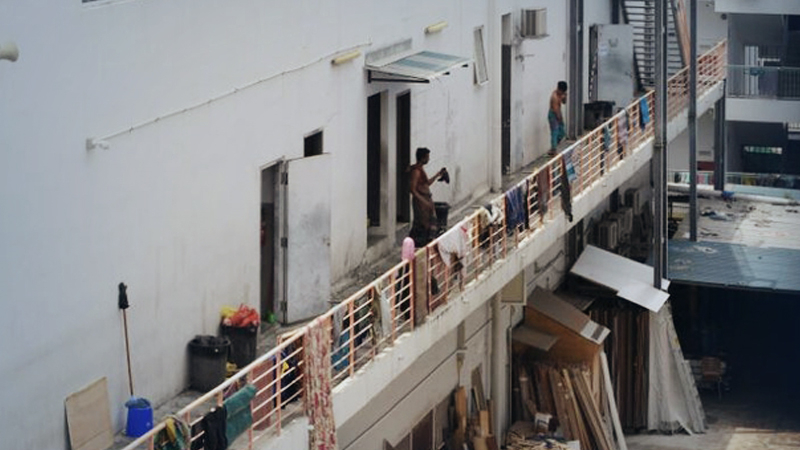 SJ Dormitory at 180 Woodlands Industrial Park E5 is the location of one of the clusters announced this week. ST PHOTO: ALPHONSUS CHERN

By Clement Yong
The Straits Times/ANN

SINGAPORE - An 11th patient has died from complications due to Covid-19 infection on Friday (April 17), said the Ministry of Health (MOH).

The 95-year-old Singaporean man was confirmed to have the coronavirus on Monday.

Raffles Hospital has contacted his family and is extending assistance to them, MOH said on Friday.

The ministry also gave an update on the 623 new Covid-19 cases on Friday night, its second update on infection numbers of the day - foreign workers staying in dormitories make up 558 of the 623 new cases, or nine in 10 new patients.

The latest figures mean that about 1 per cent of the 323,000 living in dormitories have so far been infected.

The other new patients announced on Friday are 27 community cases and 37 work permit holders who did not stay in dormitories. There is also one imported case. Of the new cases, 31 per cent are currently unlinked.

This brings the total number of people infected with the coronavirus to 5,050 in Singapore.

Another foreign worker dormitory was also placed under isolation. Health Minister Gan Kim Yong declared  Kranji Lodge as an isolation area under the Infectious Diseases Act, according to a notice on the Government Gazette on Friday. The move comes into effect on Saturday.

This means there are now a total of 13 dormitories declared as isolation areas where workers at these lodgings must be quarantined in their rooms for 14 days.

National Development Minister Lawrence Wong said in a Facebook post that people can expect the number of new confirmed foreign worker patients linked to dorms to remain high for some time as many are working doubly hard to test the workers and isolate those who are infected from the healthy.

He said the vast majority of the workers are young and show only mild symptoms, and the Government is preparing additional facilities to accommodate those who recover. None of the foreign patients linked to dorms is in intensive care.

MOH noted on Friday that in the 11 days since the circuit breaker measures kicked in on April 7 to limit the spread of the coronavirus here, the number of new cases in the community has decreased, from an average of 40 cases per day in the week before, to an average of 32 per day in the past week.

"The circuit breaker measures appear to have helped, but we still have to monitor carefully the numbers over the next few days," the ministry said.

MOH said it was concerned that it is increasingly difficult to link the new cases and identify the source of infection.

"We have an ongoing surveillance programme, where a small sample of patients at our primary care facilities are tested for Covid-19 infections," said MOH. Primary healthcare services in Singapore are provided by general practitioner clinics and polyclinics.

"We have picked up some cases through these tests, which is an indication of undetected cases in the community."

The ministry also gave an update on a coronavirus patient from the public healthcare sector.

The 34-year-old Malaysian nurse at Bright Vision Hospital had been in Malaysia from Jan 29 to April 8. She reported onset of symptoms on Thursday, and subsequent test results confirmed Covid-19 infection on Friday. She was warded at the National Centre for Infectious Diseases.

She had not gone to work since she started showing symptoms as she was on stay-home notice.

MOH also said on Friday that 25 more coronavirus patients were discharged from hospitals or community isolation facilities, bringing the total number of people who have recovered here to 708.

Of the 2,113 confirmed cases still in hospital, most are stable or improving. But 22 are in critical condition in the intensive care unit.

Another 2,218 patients who are clinically well but still test positive for the coronavirus are isolated and cared for at community facilities.