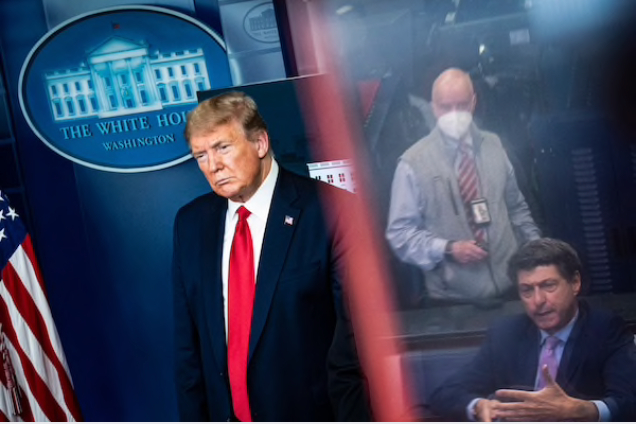 A journalist wears a mask as President Donald Trump and members of the coronavirus task force brief reporters at the White House last week. MUST CREDIT: Washington Post photo by Jabin Botsford

WASHINGTON - The Trump administration and congressional leaders are closing in on a $400 billion-plus deal that could pass the Senate as soon as Monday to renew funding for a small business loan program that ran out of money and also boost funding for hospitals and testing, Treasury Secretary Steven Mnuchin said Sunday.

Mnuchin said on CNN he hoped to see the agreement pass the Senate on Monday and the House on Tuesday. Senate Minority Leader Charles Schumer, D-N.Y., also expressed optimism about getting a deal done "tonight or tomorrow morning."

The agreement also would include $75 billion for hospitals and $25 billion for testing, which have been major Democratic demands.

Another major Democratic ask - money for cities and states - appeared left out of the deal, though talks remained fluid, and Schumer said some items were still being discussed.

Congressional aides cautioned details were in flux, and the agreement was not final.

Mnuchin said he'd been in contact with GOP congressional leaders and "We're all on board with the same plan."

"I'm hopeful that we can reach an agreement that the Senate can pass this tomorrow and that the House can pass this on Tuesday, and Wednesday we would be back up and running," he said.

On Thursday, the White House said nearly all of the $349 billion had been committed and the SBA stopped backing new loans. The White House said the program allowed 1.6 million companies to receive the loans, and most of the money must be spent on paying the wages of employees to minimize job losses during the pandemic. More than 22 million Americans have filed for unemployment benefits in the past four weeks.

Even with the 1.6 million loans, it appears a fraction of companies received the taxpayer assistance. There are 30 million small businesses, and many firms complained they were blocked from accessing the money. On CNN, Mnuchin was asked whether Congress would need to appropriate even more money on top of the $300 billion to help more companies, and he said the $300 billion would be sufficient.

Schumer said there would be changes sought by Democrats to the Paycheck Protection Program to ensure greater participation by community banks that would ensure smaller businesses get more money.

Schumer and House Speaker Nancy Pelosi, D-Calif., have been negotiating with Mnuchin throughout the weekend.

"Speaker Pelosi and I have had constant discussions with Secretary Mnuchin, we've made very good progress, and I'm very hopeful we can come to an agreement tonight or tomorrow morning," Schumer said.