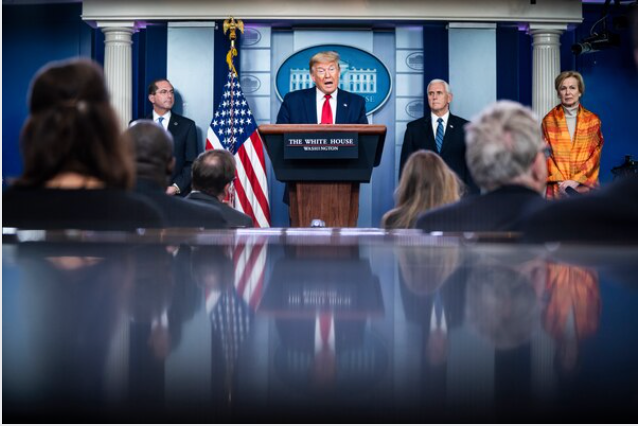 Maryland Gov. Larry Hogan, a Republican, described Trump's comments defending protesters as unhelpful and nonsensical, while Virginia Gov. Ralph Northam, a Democrat, said the president's claims that the country has enough tests for the virus are "delusional."

Northam said Trump is focused on protests because he has not been able to deliver on his promise of supplying more tests.

"We are fighting a biological war, and we have been asked as governors to fight that war without the supplies we need," Northam said Sunday on CNN's "State of the Union," where he appeared with Hogan and Michigan Gov. Gretchen Whitmer, a Democrat.

"Every governor in America has been pushing and fighting and clawing to get more tests, not only from the federal government but from every private lab in America and from across the world," Hogan said. "It's nowhere near where it needs to be."

The governors' comments came as the District of Columbia, Maryland and Virginia hit another milestone in the pandemic Sunday, with a combined 24,200 confirmed cases and 930 deaths.

As of Sunday evening, the three jurisdictions had reported 1,133 newly confirmed cases of the novel coronavirus and 39 deaths. But there was good news. The three also reported fewer new cases than Saturday. The region's elected leaders have said they need to see at least 14 days of continued decline in deaths and hospitalizations before considering whether to lift restrictions.

"Just as soon as we can get this health crisis behind us, we will be able to address the economic crisis, get back to were we were and let people get back to their normal lives," Northam said on CNN.

Virginia added 19 deaths Sunday, bringing its total to 280, according to The Washington Post's tally. The state reported 8,567 confirmed cases Sunday, up 484 from Saturday.

Virginia reported fewer new cases Saturday and Sunday compared with Friday, when it reported 602 new cases, the highest single-day increase. Northam said Sunday that the state was beginning to see the spread abate "a bit."

There were 554 coronavirus-related deaths in Maryland as of Sunday morning, up 15 from Saturday. There were 12,836 confirmed coronavirus cases in the state, including 522 new cases. The state reported 736 new cases Saturday.

The Charles County Department of Health identified 101 cases of covid-19 in county nursing homes and assisted-living facilities. The facilities with positive cases include Sagepoint Nursing and Rehabilitation Center, according to Maryland officials.

"Despite following all the top health care guidelines and regulations, our staff is devastated to see this virus affect the community," the Sagepoint board of directors said in a message to the senior community.

D.C. added 127 confirmed cases Sunday - 63 fewer than added Saturday, bringing its total to 2,797. Ninety-six people have died of the disease in the nation's capital, including five new deaths reported Sunday.

Nonessential businesses will remain closed until May 15 in D.C., May 10 in Maryland and May 8 in Virginia, where a stay-home order remains in place until June 10. Leaders have warned against letting up on efforts to slow the spread of the coronavirus. D.C. and Maryland have ordered residents to wear masks in public, such as when they go to stores or use public transportation.

In his CNN appearance, Hogan said he sympathized with protesters clamoring to restart the economy but said it would be reckless to do so right now.

"I understand the frustration among the people that want to get things open right away. I'm frustrated, too. I wish I had someone to protest to," Hogan said, before calling out Trump for fanning demonstrations that contradict the reopening guidelines the president issued Thursday. Those guidelines suggest states not consider reopening until coronavirus cases have declined for 14 days.

"I don't think it's helpful to encourage demonstrations and encourage people to go against the president's own policy," Hogan said. "It just doesn't make any sense."

In a tweetstorm Friday morning, Trump encouraged protesters in Virginia and other states who violated stay-home orders and social distancing guidelines to march against mostly Democratic governors.

"LIBERATE VIRGINIA, and save your great 2nd Amendment. It is under siege!" Trump tweeted.

The president continued his attack on Virginia at a media briefing Saturday, saying Northam was trying to take away the Second Amendment. Northam recently signed into law a slate of gun-control legislation, which included expanding background checks to all firearm sales.

"People really have to start looking at what's going on in Virginia," Trump said.

Northam, responding specifically to Trump's calls to "liberate" Virginia, said Sunday: "Our president obviously has been unable to deliver on tests and has chosen to focus on protests."

Under pressure from civil rights advocates, public health experts and congressional Democrats, Hogan announced Sunday that he had signed an executive order granting early release to hundreds of inmates.

About 720 prisoners, who are both nearing the end of their sentences and are at high risk for complications of covid-19, the disease the novel coronavirus causes, have been identified for potential release, Hogan spokesman Michael Ricci said.

The order comes days after officials announced the first inmate died of covid-19. It also follows more than a month of advocates lobbying Hogan to take aggressive action to release high-risk elderly inmates, those with chronic medical conditions and inmates nearing the end of their prison terms.

Baltimore City State's Attorney Marilyn Mosby, who has been pressing hard for the inmate release, said the action will prevent more deaths among the incarcerated population and the staff.

Meanwhile, a federal judge on Sunday ordered the D.C. jail to immediately improve medical, cleaning and social distancing procedures for its 1,400 prisoners to fight the spread of the virus.

The order stopped short of releasing any inmates, as has been requested by the American Civil Liberties Union and the D.C. Public Defender Service.

As of Sunday, the jail had reported 90 inmates testing positive for the virus and 26 staffers. One prisoner and one worker have died of covid-19.