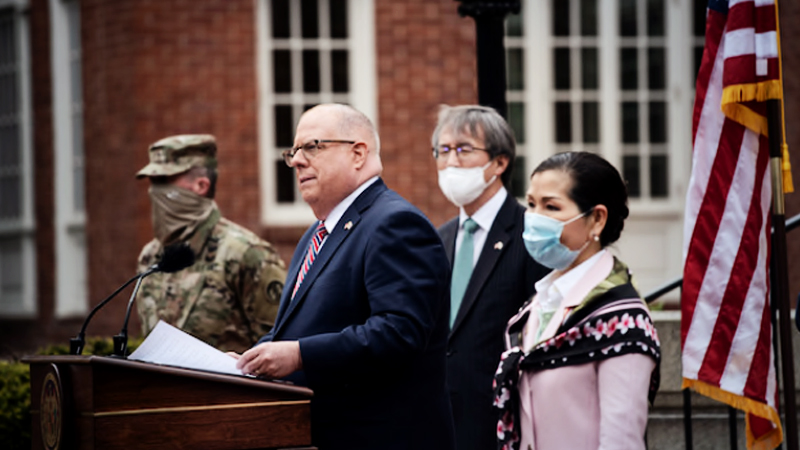 Maryland Gov. Larry Hogan was joined by his wife, Yumi Hogan, right, to announce that the state received 500,000 Covid-19 tests from South Korea during a news conference in Annapolis, Md., on Monday. MUST CREDIT: Washington Post photo by Michael Robinson Chavez

Testing shortages have stymied the pandemic response across the country, sparking friction between the White House and governors who are on the front-line of managing the health crisis.

The Republican governor said he turned abroad in late March in the absence of support from the federal government, and was able after weeks of efforts to procure about one test for every 12 Marylanders.

The governor called his wife, Yumi Hogan, "the hero" of the operation because she helped negotiate the deal in calls with officials in her native South Korea. The two watched the $9 million shipment arrive Saturday from the tarmac of Baltimore Washington International Airport.

"The administration made it clear over and over again they want the states to take the lead and we have to go out and do it ourselves," Hogan said. "So that's exactly what we did."

As chair of the National Governors Association, Hogan - who considered challenging Trump for president this year but decided against it - has frequently contradicted the president's assertions about how states are responding to covid-19.

Expanded testing, along with sufficient personal protective equipment and hospital capacity, are among the conditions needed to reopen Maryland for business, Hogan said.

The kits obtained from South Korea will help meet Hogan's goal of testing 10,000 a day. But the governor said he wants to double that goal to 20,000 a day, and cautioned the state will still need other supplies, such as swabs and reagents, to administer all of the new tests and testing kits obtained from other sources.

The nationwide testing shortage, Hogan said, has not only pitted states against each other in trying to procure tests, "it remains the most serious obstacle to safely reopening our states."

Public health authorities have said broader coronavirus testing is essential for recovery efforts to help officials understand the full reach of the virus in a community and whether growth is slowing. With supplies limited, many jurisdictions are prioritizing testing for high-risk groups and awaiting antibody testing kits that can identify signs of exposure.

Virginia Gov. Ralph Northam announced Monday that he has formed a task force to oversee and coordinate testing. Saying the state still lacks crucial elements for testing - especially swabs and chemical reagents - Northam said that state labs, private health systems and colleges and universities have marshalled enough resources to begin creating a systematic approach that will help officials better understand the spread of the disease and when to ease up restrictions.

The task force "will work to increase testing volume and timeliness, to decrease backlogs and keep up with demand," Northam, D, said at a news briefing.

Unlike Maryland, Virginia has not set a daily goal for testing. Northam said Vice President Mike Pence, in a Monday call with governors, offered federal assistance in testing for covid-19 at nursing homes and other institutions serving the vulnerable.

But the governor also complained that the federal government has not followed through on its responsibility to help states get access to supplies to increase testing capacity, such as swabs. "I think they understand that and are working on not only manufacturing more of those swabs but also in dispersing and directing those to states that need it the most," Northam said.

In the District of Columbia, officials have started deploying rapid coronavirus testing equipment at institutions serving the vulnerable. City officials say their public health lab has the capacity to test up to 500 a day but does not get that many requests. They are encouraging anyone with symptoms to seek tests - not just those in high-risk groups.

"We know that having the level of testing consistent with getting open is going to take more," Washington Mayor Muriel Bowser said.

Officials said the city is also watching for declines in reports of flu-like illnesses, in addition to lab-confirmed covid-19 cases, and monitoring the availability of personal protective equipment for health professionals, as it weighs whether and when to lift restrictions.

While officials across the capital region have said social distancing measures appear to have curbed new infections, they have also cautioned lifting those measures prematurely might result in a spike that overwhelms local hospitals.

Nonessential businesses will remain closed at least until May 15 in the District of Columbia, May 10 in Maryland and May 8 in Virginia, where a stay-at-home order remains in place until June 10. Maryland late last week extended school closures at least through May 15, while the District of Columbia and Virginia havesuspended in-person education through the end of the academic year.

Officials are also monitoring local hospitals for signs of a medical surge.

Officials say D.C. hospitals are running at about 70% capacity. The city originally projected needing an additional 1,000 hospital beds by April 15, but its hospitals have been able to handle covid-19 cases without extra space.

The city is preparing for a potential surge by turning a downtown convention center into a care facility for patients with mild covid-19 symptoms. By early May, the center should be able to treat up to 500, officials said, with the ability to add 1,000 more beds depending on demand.

"We hope it won't ever be needed, but it will be there in the event we hit a peak that exceeds what's available in the hospitals," said Bowser.

The number of overall confirmed covid-19 casesin the District, Maryland and Virginia climbed past 25,000 on Monday, with more than 1,400 positive test results reported. The regional daily new cases, which reflects tests taken a week or more ago and infections from days before that, in general have hovered in the low 1000s since April 9.

The District of Columbia on Monday reported 134 covid-19 cases and nine new fatalities, pushing the city's death toll to 105.

Maryland added 855 new cases, its highest single-day increase in two weeks. More than a quarter of those cases are located in Prince George's County, which leads the state in both infections and deaths. The county added seven deaths, bringing its total fatalities to 112. Neighboring Montgomery County reported 140 new cases and 10 new deaths.

In Virginia, there were 453 new infections, nearly half located in the Washington suburbs. The Fairfax health district, reported 150 new cases, while Prince William County and Alexandria City added 59 and 38 cases respectively. There were also 23 new deaths recorded in Virginia, including 11 in Fairfax.

While the Washington has largely avoided protests against social distancing measures, both Annapolis, Maryland, and Richmond, Virginia, have seen small pockets of resistance in recent days.

A small protest in Annapolis on Monday attracted fewer people than media inquiries, according to state officials, after a somewhat larger demonstration last week.

The Republican Party of Virginia, meanwhile, echoed Trump's recent criticism of Virginia's shutdown, in an email that also called for Virginians to "liberate" themselves.

The email urged reporters attending in Northam's press briefing to "consider asking him if shutting down Virginia is actually for our health." It also warned reporters against Northam's "attempts to enchant you with a canned 'now is not the time for partisanship' answer in his Eastern Shore drawl . . . ."

Republican legislative leaders have urged Northam to start laying the groundwork for reopening the state's economy.

But with the notable exception of state Sen. Amanda Chase, a Trump-style iconoclast and 2021 gubernatorial candidate, most of the state's elected officials have not encouraged Virginians to defy Northam's orders to stay home whenever possible and avoid gatherings of more than 10 people.

Northam said the White House has been sending mixed messages on covid-19 recovery, such as how the president tweeted "liberate Virginia" days after the CDC urging states to look for two weeks of declining infections before reopening.

"I am just as anxious as anybody else out there to relieve these restrictions," Northam said Monday. "I really don't need people protesting to encourage me to open up our economy any sooner than we can do safely and responsibly."