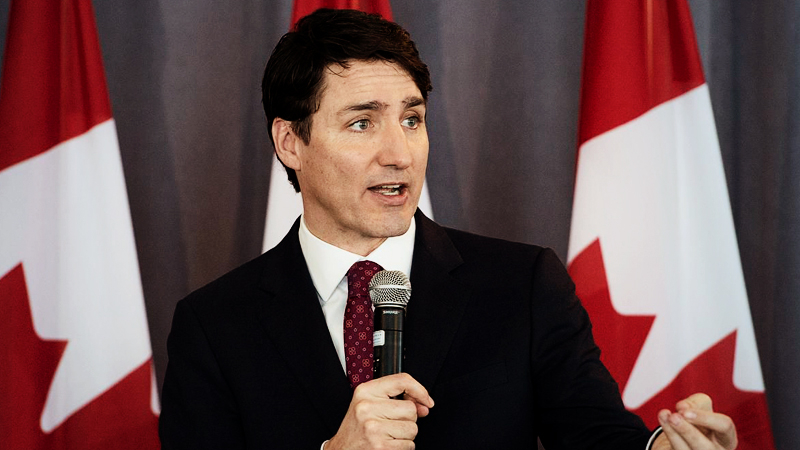 By Special To The Washington Post · Amanda Coletta · WORLD, THE-AMERICAS

Canadian Prime Minister Justin Trudeau said Monday that his government would move ahead on the gun-control legislation he promised during last year's election campaign after the deadliest shooting in his country's history, though it was not clear how soon he would do so.

"I can say that we were on the verge of introducing legislation to ban assault-style weapons across this country," he told reporters. "It was interrupted when the pandemic caused Parliament to be suspended, but we have every intention of moving forward on that measure, and potentially other measures, when Parliament returns."

Authorities say a single gunman shot and killed at least 18 people in rural Nova Scotia during a rampage Saturday and Sunday before he died.

"While we appreciate the capacity for substantive policy change is difficult at this moment," the groups wrote to Blair, "we implore you to take one decisive, achievable action right now. … As has been well documented, these guns pose an excessive risk to public safety and serve no reasonable purpose."

Authorities have not said what firearms suspect Gabriel Wortman used in the shootings or how he obtained them.

Blair said he intended to introduce gun-control legislation "as quickly as possible."

Rod Giltaca, chief executive of the Canadian Coalition for Firearm Rights, said it was too soon to debate guns.

"Just shy of 24 hours past the tragedy in Nova Scotia, the gun-control lobby is leveraging this community's suffering for their own political gain," he said. "No law in this country could have stopped a madman with this level of determination and resources."

Giltaca said "there will be time to debate the details of this event when we know more," but now "is the time to support those affected by this senseless tragedy."

The massacre began Saturday night in the quiet waterfront town of Portapique, Nova Scotia, where police responding to a firearms complaint made a grim discovery: bodies inside and outside a home - but no gunman.

It ended Sunday morning at a gas station in Enfield, some 57 miles away, after a 12-hour manhunt. By the end, there were more than 19 dead, including a member of the Royal Canadian Mounted Police (RCMP) and the suspect; 16 crime scenes; structures aflame across hundreds of miles; and a country reeling.

On Monday, the identities of the victims began to emerge. They included Constable Heidi Stevenson, a mother of two who served 23 years with the RCMP, and Heather O'Brien, a nurse and a grandmother.

Lisa McCully taught third and fourth grades in Debert, Nova Scotia. Scott Armstrong, the principal at Debert Elementary School, said McCully was "a go-getter gal" who shared her passions for art and music with her students.

"She was just a shining light," Armstrong said. "When she walked in the classroom, her kids lit up."

He said students and staff at the school know multiple victims.

"Having police and SWAT cars here … we might as well be on Mars," he said.

Trudeau discussed the shooting during his daily coronavirus briefing.

"We are a country that stands united in our effort to defeat a pandemic, to save lives and to help each other make it to a better day," said Trudeau, speaking outside Rideau Cottage in Ottawa. "But yesterday, we were jolted from that common cause by the senseless violence and tragedy in Nova Scotia."

He said the shooting stunned rural towns across the country, where "people have deep roots … know their neighbors and look out for one another."

Trudeau said the country would hold a virtual vigil for the victims on Friday. He said the inability of Canadians to gather and mourn together amid coronavirus restrictions was a "heartbreak on top of other heartbreaks."

Investigators worked to piece together why and how Wortman, 51, disguised himself as an RCMP officer and began shooting people before dying in a confrontation with police.

Chief Superintendent Chris Leather, criminal operations officer for Nova Scotia RCMP, said Monday that at least some of the victims were known to the suspect, but others were not. Leather said Wortman wore what appeared to be part of an RCMP uniform, or a "facsimile" of one, and at one point drove a car made to resemble an RCMP cruiser.

Leather said police found the fake cruiser at the crime scene where Stevenson was killed. Two vehicles, including the fake cruiser, were on fire. He said Wortman later used civilians' vehicles, but he did not elaborate on how they were obtained.

Wortman was killed in a confrontation with police at a gas station. Police said initially that they had taken him into custody; later they said he had died. They have not provided details. Leather said there was an exchange of gunfire between Wortman and police at one point during the evening.

Wortman, a denturist, owned a business in Dartmouth, Nova Scotia. In 2014, he appeared in a local news story after gifting a set of dentures to a Halifax cancer survivor who had lost her teeth during her treatment.

The Globe and Mail reported that Wortman was obsessed with policing and law enforcement memorabilia. His high school yearbook profile said his "future may include being an RCMP officer."

Canada has the fifth-highest rate of civilian gun ownership in the world, but has suffered few of the mass shootings that afflict the neighboring United States. The country's previous deadliest mass shooting was in 1989, when a gunman killed 14 women and himself at Montreal's École Polytechnique.

That shooting prompted Canada to overhaul its gun laws. Trudeau campaigned last year on a promise to ban and buy back legally purchased "military-style" assault weapons. He also pledged to help municipalities ban handguns, a measure supported by the mayors of Toronto and Montreal, among other cities.

Christine Blair, mayor of Colchester County, Nova Scotia, which includes Portapique, said it will take a long time for the community - where everyone knows everyone and people leave their doors unlocked - to heal from the attack.

"It's a trusting community," she said. "To have something like this happen has shaken our very existence."