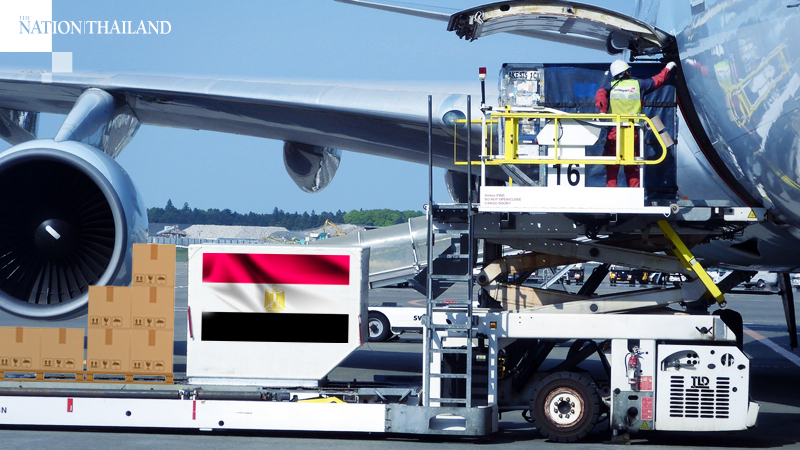 A C-130 military aircraft loaded with medical supplies from Egypt is scheduled to land at Dulles International Airport on Tuesday to help fight the coronavirus, a U.S. official said Monday, a gesture meant to show support for President Donald Trump and the U.S.-Egypt alliance.

The gift comes even as some Egyptian critics questioned if their country has the resources to be giving away supplies for the pandemic.

The supplies, according to a log provided by Mike Evans, a Texas writer and Christian activist who has advised Trump and met frequently with Middle Eastern leaders including Egyptian President Abdel-Fattah el-Sissi, include anesthesia drugs and antibiotics as well as body bags, masks and testing swabs. A U.S. official, speaking on the condition of anonymity due to protocol, confirmed that the shipment is to arrive Tuesday in Washington.

The Egyptian Embassy in Washington did not return calls.

Evans called the shipments "humanitarian aid" to the country of a president Sissi highly respects.

"I know that firsthand, as I've been with him many times," he said of Sissi's affection for Trump. "Egypt is showing its gratitude for the support it has received since President Trump was elected to office."

The shipments were the latest from Egypt to countries in the West and follow gifts to Italy and Britain. They also come a few days after Egypt received four tons of medical protective supplies from China to help it fight the coronavirus, according to the Egyptian health ministry. The aid was the first in a series of shipments, said Chinese Ambassador to Cairo Lio Liqiangwho, Ahram Online reported April 16.

"Here's the question: Does Egypt really have enough of these things to be giving them away or exporting them?" asked Michele Dunne, director of the Middle East Program at the Carnegie Endowment for International Peace.

She noted reports that there have been outbreaks of the virus in some Egyptian hospitals and some drug hoarding. A third of Egypt's population of more than 100 million people live in extreme poverty.

"Egypt giving away or exporting [aid] will cause concern or even resentment inside Egypt," Dunne said. "What el-Sissi is doing with gifts or sales is to show he's on top of covid-19 inside Egypt and he wants to build up some of his important relationships. But there are a lot of questions about what the covid-19 outbreak in Egypt really looks like."

The coronavirus death rate in Egypt is more than 7%, Egypt Today reported Sunday, citing the country's health minister. That's about where it's been in the United States.

According to the website of the U.S. Embassy in Egypt, as of Sunday there were 3,144 confirmed cases of the virus in the country.

Early in April, Sissi sent two military jets to Italy carrying medical equipment, protective suits, detergents and sanitizers to combat the spread of the coronavirus. On the packages, in Arabic and Italian, were the words: "From the Egyptian people to the Italian people."

Egypt's minister of health and population, Hala Zayed, also came with the shipment, and personally delivered it to Italian officials in front of the media. The whole ceremony was shown live on Facebook.

A week earlier, Egypt sent 1 million medical masks to Italy and in February, Zayed flew to Beijing, delivering ten tons of medical equipment and other items to China. And last week, the Sissi government sent a large number of medical gowns to another key ally, Britain, according to a tweet by the British minister of state for international trade, Greg Hands.

The Italian energy giant Eni is working with Egypt on developing a massive natural gas field in the Mediterranean, said Michael Wahid Hanna at the Century Foundation.

Egyptian officials have portrayed the medical shipments as friendly gestures between Egypt and these nations in light of their historical alliances. After the Italian shipments were delivered, an Egyptian presidential spokesman, Bassam Rady, said the aid "comes in line with the historical ties between the two friendly countries" and that it was designed to ease "the burden on Italy in its current plight," according to Egypt's state-run Al Ahram newspaper.

But many Egyptians took to social media questioning their government's shipments when prices of face masks and hand sanitizers have soared, making them unaffordable for the majority of Egyptians. A doctor and a pharmaceutical worker were arrested by Egyptian security forces after complaining about the lack of masks on a Facebook video, according to U.N. human rights officials.

The medical shipments are seen by some as a way of scoring points with the United States and Europe at a time when Sissi is building what critics say is the most repressive regime in Egypt's modern history. The Trump administration has largely been publicly silent about the regime's vast human rights abuses. But in Congress, lawmakers are seeking to cut hundreds of millions of dollars in military aid to Egypt over the death in January of an American citizen held in an Egyptian prison.

Italy is Egypt's largest trading partner in the European Union. But relationships have been strained ever since the brutal 2016 murder of an Italian graduate student, widely suspected of being tortured and killed by Egyptian security forces.

Egypt isn't the only country to donate to the United States during the pandemic. Trump at the end of March said Russia sent "a very, very large planeload" of medical equipment, the president said during a briefing.