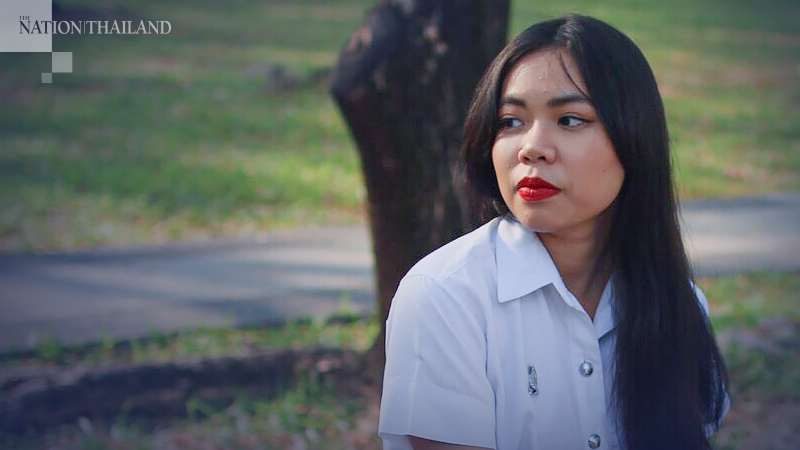 Aomtip Kerdplanant, one of the key leaders of the student networks, is determined to carry on the “fight for democracy”.

Students are expected to resume intense political activities after the Covid-19 situation normalises and the government eases its lockdown restrictions next month.

Before the spread of Covid-19, students in universities across the country and some high schools in Bangkok had organised flash mobs in February and March to express their demand for democracy, rewriting the Constitution and ending the current military-backed coalition government.

The advent of coronavirus has disrupted their flash-mob activities.

The government had imposed a State of Emergency and clamped night curfew until April 30, and provinces also imposed a strict lockdown in attempts to contain the spread of the coronavirus.

“The Covid-19 outbreak has not weakened our fight for democracy. The pandemic exposes the weakness of the current political system,” Chulalongkorn University student Teerapat Arunrat said, referring to politics that are “highly influenced by the military”.

“The fight for democracy would be a long haul and the challenge is how we can win permanently,” he said, referring to the victory of the student uprising in 1973, but only to see three years later students being defeated in the October 6, 1976, massacre.

Another Chulalongkorn University student, Aomtip Kerdplanant, said the emergency and curfew has seen some impact on their activities, but they are still “doing their jobs”.

“We have to be creative and take the stage on an online platform,” she said.

Students have accepted social distancing, as it helps to slow the spread of the virus, Aomtip said. However, the government has to take care of people who cannot adhere to social distancing as they have to earn a living, she added.

Aomtip did not agreed with the 10pm to 4am night curfew because it “has created a burden on people". She also questioned its effectiveness in combating Covid-19.

She said she had earlier joined the flash protests because she could no longer tolerate the “injustice in society, which is largely caused by the military-sponsored Constitution”.

Aomtip also said that the way students organise their movement now is quite different from the past. The current movement adopts networks as a key platform compared to past movements that used a centralised approach.

The network approach gives them more flexibility as they can easily adapt to a fast-changing situation, said Anusorn Tamajai, a student activist before the May uprising in 1992.

Anusorn agreed that the Covid-19 situation exposed the weakness of the military-elected-politician hybrid system. The current Constitution is biased as it has allowed preferred political parties to form a coalition government, leading to weak leadership, he said.

The government has also failed in addressing the economic challenges caused by the pandemic, Anusorn added, in reference to people facing severe hardship stemming from the lockdown and inadequate aid for those affected.

Many critics have pointed to the reputation of the military, which has been shaken since the mass shooting by a soldier in Nakhon Ratchasima, followed by the virus spreading at a boxing stadium run by the Army and louder calls for the military to stop weapon purchases in order to save money for the battle against Covid-19.

The reputation of key institutions, including the Court of Justice, has also been shaken after the Constitutional Court handed down a verdict on February 21 to disband the Future Forward Party. The ruling has been seen as the last straw, triggering flash protests by students nationwide. And Prime Minister Prayut Chan-o-cha has come under attack on social media after he pleaded for help from 20 richest Thais to support the government’s coronavirus fight, leading to a large number of netizens retweeting the hashtag “#beggar government” on Twitter.

Some market analysts have told investors to keep a close eye on politics after the Covid-19 situation normalises and the government eases the lockdown as this could potentially lead to political uncertainty. This comes as many businesses are preparing to reopen on May 1, given a steady decline in new virus cases.

Meanwhile, Gothom Arya, adviser to Mahidol University’s Institute of Human Rights and Peace Studies, said he has witnessed the important role played by local governments and communities in containing the spread of Covid-19, suggesting a decentralised system will be more efficient than a centralised one. Gothom called on the government to resume local government elections, long delayed since the coup in 2014.