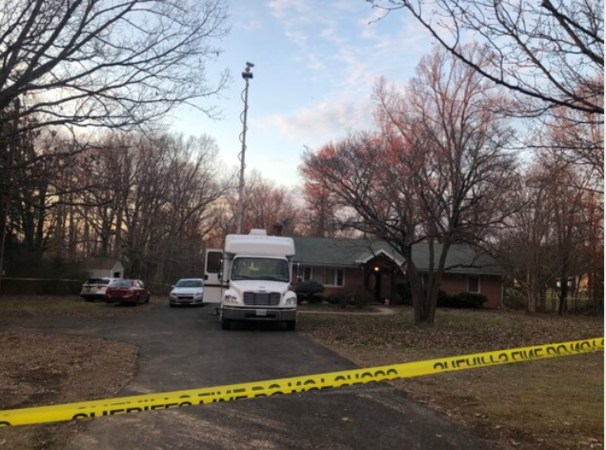 The house in Fauquier County where 17-year-old Levi Norwood is accused of killing his mother and 6-year-old brother and wounding his father. His father, Joshua Norwood, was found dead here Monday. MUST CREDIT: Washington Post photo by Moriah Balingit.

His mother begged him not to give up.

But two months after his wife and 6-year-old son were killed and his older son was charged with murder, Joshua Norwood saw only one way forward, he told his mother, Ginny, on Monday.

"He said for me not to be sorry, be happy because he would be with Jen and Wyatt," Ginny Norwood wrote on her Facebook page.

Joshua hung up and wrote one last message. "He sent me a text and said, 'I love you' and that he needed to be with them," Ginny wrote.

Then Joshua returned to the living room of his northern Virginia ranch home. It was there, on Feb. 14, that he had discovered the bodies of Jennifer Norwood, 34, and Wyatt, 6. And it was there, at 3:30 p.m. Monday, that Fauquier County sheriff's deputies discovered Joshua's body. They were called to the house by his mother, who lives in Maine.

"My boy, my only boy, My son Joshua killed himself a couple hours ago," Ginny wrote on Facebook.

Her son suffered trauma to his upper body, but no foul play is suspected, the Fauquier County Sheriff's Office said. An official cause of death will not be declared until an autopsy is completed, said James Hartman, a spokesman for the sheriff's office. He declined to provide further details.

The death marks the latest tragedy in the Norwood family.

Levi, 17, has been charged with first-degree murder in the killings of his mother and brother.

Joshua's aunt, Rebecca Norwood, wrote on Facebook that he had taken his life because "his pain was so deep, and he saw no other way out."

"He told me he died the night his wife and lil boy were killed and he was just an empty shell of a person."

A month after the deaths of his wife and son, Joshua Norwood filed a petition to restore his gun rights. According to his petition, he had been involuntarily admitted to a facility or ordered to mandatory outpatient treatment in the Richmond area from March 11 to March 13. He was scheduled for a hearing on Tuesday in Fauquier County General District Court, but the proceeding was pushed back to May 11 because of the coronavirus pandemic, according to court records and the court clerk.

"He was really upset that police had taken his guns," said one acquaintance who had spoken to him in recent weeks. "He wanted to be able to protect himself, now that he was alone."

In a previous interview with The Washington Post, Joshua Norwood described coming home with a bouquet of flowers for his wife about 6 p.m. on Valentine's Day. When he opened the door to their brick house on Elk Run Road, a gunshot rang out from the basement, and the bullet grazed his head, he said. Norwood, who often carried a gun, fired back, and his assailant fled the house.

The father found his wife and youngest son fatally shot and lying under blankets in the living room. It wasn't until the next day that he learned the alleged culprit was his older son.

"Every day for the rest of my life," he said, "I'm going to wake up, look in the mirror, and I'm going to have a scar down my face, my head, as a memory of the worst day of my life, when my family got taken away."

Eventually, Levi was tracked down in North Carolina, arrested and returned to Virginia. He is being held at a regional juvenile detention center, awaiting trial. It's unclear how his father's death will affect his case. Scott Hook, Fauquier County's commonwealth's attorney, declined to comment.

In the aftermath of the killings, Joshua Norwood had come under scrutiny for his own behavior, facing accusations that he was a racist who objected to his son's having a black girlfriend. His Facebook page featured a well-known saying by white supremacist David Lane: "We must secure the existence of our race, and a future for white children." The Southern Poverty Law Center describes Lane as "one of the most important ideologues of contemporary white supremacy."

Norwood appears to have made dozens of posts on the white supremacist website Stormfront.

And the acquaintance, who met Norwood on Stormfront and last spoke to him earlier this month, said Norwood was worried the police investigation would reveal his white supremacist ties.

"He didn't want any information coming out tainting his reputation or emboldening his son's defense case," according to the acquaintance, who spoke on the condition of anonymity to avoid association with Stormfront.

But Norwood insisted in February that he was not a white supremacist. He said he could not remember why he promoted Lane's maxim on Facebook.

Levi Norwood's girlfriend has not returned messages from The Post, and her parents have declined to be interviewed.