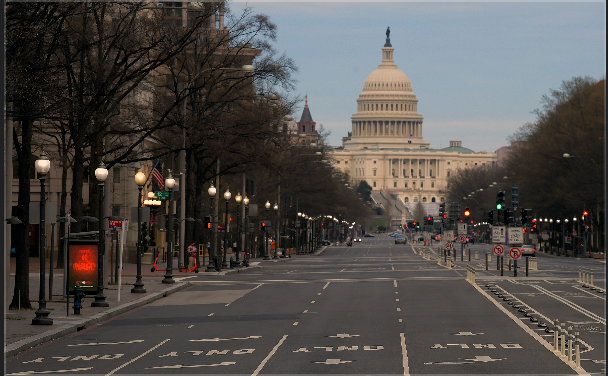 WASHINGTON - House Democrats pushed toward a Thursday vote that would, for the first time in the chamber's more than 230-year history, allow lawmakers to vote in absentia during the coronavirus pandemic - a short-term fix that would still leave Congress incapable of performing many day-to-day duties.

Democrats, who continued haggling on the new proposal without releasing a formal plan, hope to gain support from Republicans as a safety measure so lawmakers do not have to crisscross the country to attend votes in Washington when most governors have stay-home orders in place to prevent the virus's spread.

"That is an important first step that I believe we need to put procedures in place to allow remote voting and, I emphasize, remote committee work," House Majority Leader Steny Hoyer, D-Md., told reporters Tuesday on a media call. He described the phone call as "our new normal" instead of a regular in-person meeting in his conference room.

The emerging plan has no special provisions for how the legislative committees could work remotely to conduct hearings and draft bills, exposing a divide within Democratic ranks and leaving Republicans questioning the way ahead.

Hoyer repeated his belief Tuesday that voting could be done, on the House floor and for committee work, by using basic technologies such as FaceTime or Zoom, video services used by millions of Americans. "We don't need secret technology. We don't need highly secure technology," he said.

But Rep. Jim McGovern, D-Mass., chairman of the House Rules Committee and architect of the new voting proposal, issued a letter Thursday that rejected "using the kind of technology that is susceptible to hacking or interference by foreign bad actors."

Republicans held out support for the proposed "proxy voting" in which lawmakers unable to attend sessions in the Capitol would send letters to other lawmakers instructing them how to vote on their behalf.

House Minority Leader Kevin McCarthy, R-Calif., called for a more broad, detailed plan to get the full Congress functioning beyond the emergency coronavirus legislation a few top lawmakers and several Trump administration officials have worked on over the past six weeks, largely behind closed doors.

"Now, more than ever, our constituents expect us to rise to the occasion and overcome these trying circumstances," McCarthy wrote Tuesday in a letter to House Speaker Nancy Pelosi, D-Calif. "It is imperative we outline a pathway forward that ensures transparency and regular order for all members - not centralized decision-making by a select group of leadership and staff that reduces the role of representative to merely voting 'yea' or 'nay' on pre-drafted proposals."

Some staunch conservatives argued that the Constitution requires members to be on hand to cast votes.

"I don't support it at all. It is completely outside of what the founders intended," Rep. Clay Higgins, R-La., told reporters after Tuesday's brief House session. Higgins said that as the Founding Fathers drafted the Constitution, in an era in which lawmakers spent long stretches away from one another, they could have easily spelled out a way for votes to be held by a courier system.

"They clearly did not support that. We're to assemble and thus be held accountable," Higgins said.

Many veteran Democrats remain opposed to any permanent use of technology to vote but understand that dozens, perhaps hundreds, of lawmakers are wary of traveling during the pandemic, particularly as Washington is in a period that some health experts say is the likely peak of infections.

"This is a very complex issue," said Rep. G.K. Butterfield, D-N.C., a former state judge who regularly presides over the House because of his parliamentary expertise. "Under the rules and the traditions of the House, voting has always been from the floor of the House of Representatives. But now that we are facing a global pandemic, we've got to look at some alternative means of voting."

Hoyer said the vote on proxy voting will come Thursday after the House votes on the new coronavirus rescue legislation, which would provide more than $300 billion for loans and grants to small businesses, provide $75 billion for aid to hospitals and provide $25 billion to boost testing capacity to detect the virus.

Hoyer, 80, is in the at-risk category for covid-19, the disease caused by the novel coronavirus has hit the elderly with a more deadly force, but his commute from the Maryland suburbs of Washington is an easy drive. Dozens of other lawmakers have preexisting conditions that put them at risk, or are helping care for an elderly person and do not want to put that relative at risk by traveling to Washington for the vote.

"We are asking every member to return who can return, and we hope that that is a large number," Hoyer said.

If they approve the proxy voting procedure, those lawmakers will be able to at least vote on the next round of emergency legislation.

These will be the first two recorded votes in almost six weeks, when the House approved the second of four bills related to fighting the health and economic crises spawned by the coronavirus.

Since then, the House and Senate have ground to a halt in terms of public action. The Cares Act, approved in late March and appropriating more than $2 trillion, came about after Treasury Secretary Steven Mnuchin spent several days shuttling between the offices of Senate Majority Leader Mitch McConnell, R-Ky., and Minority Leader Chuck Schumer, D-N.Y.

Members of the House, most of whom were back home in their districts, participated through phone calls but did not play a visible role in the talks.

That pattern continued in the talks on this week's legislation, with negotiations centering on a few congressional leaders, Mnuchin and some other administration officials.

Anger and frustration with the largely sidelined Congress emerged Tuesday as the Senate passed the new, $450 billion bill, with only a few senators on hand for less than an hour of debate and a simple voice vote.

"Most of us were not part of that process," Sen. Mike Lee, R-Utah, said, noting that he had not participated in the final talks. "This crisis is too big to leave up to a small handful of people."

Sen. Rand Paul, R-Ky., offered a measure to allow remote voting, but McConnell - who has rebuffed any proposals for proxy voting, remote voting through technology or altering long-standing rules requiring senators to be present for committee hearings - objected.