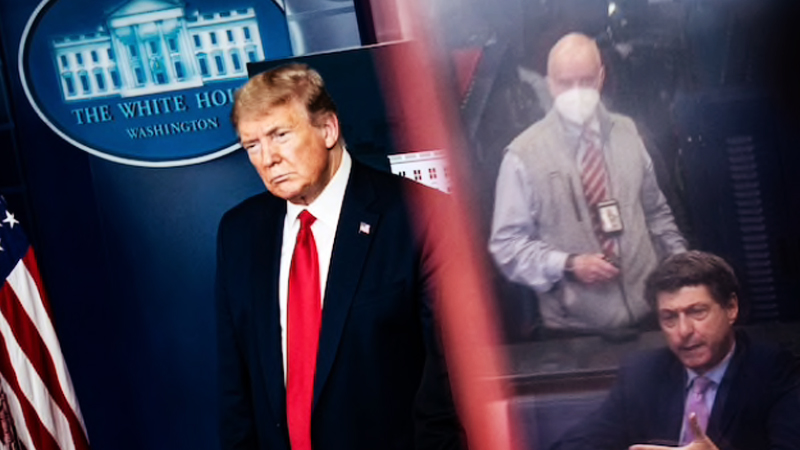 President Donald Trump said Wednesday he has instructed the Navy to "shoot down and destroy" any Iranian gunboats that "harass" U.S. ships following what U.S. officials described as a provocative encounter last week in the Persian Gulf.

News of Trump's order, shared in a morning tweet, came a week after the U.S. military said 11 small vessels belonging to Iran's Islamic Revolutionary Guard Corps conducted "dangerous and harassing approaches" toward a fleet of American ships, including the USS Lewis B. Puller, an expeditionary mobile base vessel, and the USS Paul Hamilton, a destroyer.

Iran's Revolutionary Guard later acknowledged it had a tense encounter with the U.S. warships but alleged without evidence that U.S. forces initiated the episode.

"I have instructed the United States Navy to shoot down and destroy any and all Iranian gunboats if they harass our ships at sea," Trump said in his tweet.

In a subsequent tweet, Trump suggested that his administration would adopt a tougher posture toward such incidents than the Obama administration had.

"Today, instead of bullying others, the Americans should put all their efforts toward saving those members of their forces who are infected with coronavirus," Abolfazl Shekarchi said, according to the Iranian Students' News Agency.

The Revolutionary Guard also announced Wednesday that it has put a military satellite into orbit for the first time, a move expected to further exacerbate tensions with the United States.

The Trump administration has had a series of military clashes with Iran and affiliated groups over the past year. Iran downed a U.S. drone and launched ballistic missiles at facilities housing U.S. personnel in Iraq. The United States, meanwhile, conducted a drone strike in Baghdad in January that killed Maj. Gen. Qasem Soleimani, a top Iranian commander, and has attacked Iranian-linked militias in Iraq.

Encounters at sea have been common at different points in recent years, with naval officials sometimes classifying Iranian approaches as "unsafe and unprofessional."

Trump's tweet marks the latest comment in which he has seemingly pressed the U.S. military to respond more aggressively to Iran. But there is little to suggest that much will fundamentally change.

The Navy has long adhered to a policy of defending ships with a series of escalatory warnings that include attempts to communicate by radio, horn and warning shots. Crews have the right to defend themselves but are expected not to open fire on harassing boats unless required.

In a training scenario observed by The Washington Post in January, a crew aboard the USS Tempest, a 170-personnel craft, practiced how to respond to a harassing speedboat in the Persian Gulf. Shortly after Iran launched ballistic missiles at bases in Iraq in retaliation for the U.S. killing of Soleimani in Baghdad, the Navy stressed to sailors the need to follow protocols and thoughtfully escalate the use of force only as needed.

A senior Navy spokesman, Rear Adm. Charles Brown, said Wednesday that he had nothing to add to the president's tweet. The Navy will continue to follow international laws of armed conflict, Brown said. They include guidelines that dictate that a ship's crew should not exceed the amount of force necessary to repel an attack.

After a series of provocative actions at sea attributed to Iran, the United States and several partner nations last year established a new mission headquartered in Bahrain, Operation Sentinel, designed to prevent the seizure of commercial ships or attacks on them. Smaller ships like such as Tempest are expected to carry out "sentry" duties and respond to problems that arise, and larger vessels such as destroyers use their sensors to watch out for attacks in a "sentinel" role.

According to U.S. officials, in last week's episode, the American ships were carrying out operations with Army Apache helicopters in the northern Persian Gulf.

The Iranian vessels "repeatedly crossed the bows and sterns of the U.S. vessels at extremely close range and high speeds, including multiple crossings of the Puller with a 50 yard closest point of approach and within 10 yards" of a Coast Guard ship's bow, according to a military statement.

The U.S. ships transmitted radio warnings and made warning sounds with no initial response. An hour later, the Iranian vessels responded and fell back, the military said.