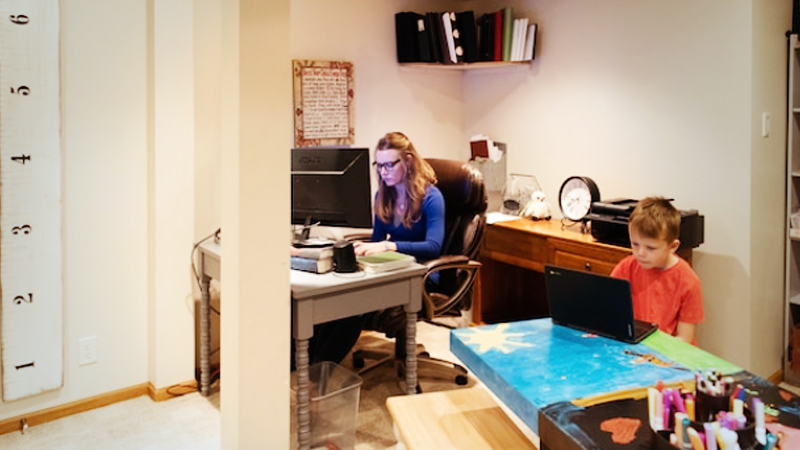 Stephanie Dinger, vice president of small business at Union Bank, works in her children's art room, which doubles as her office during the coronavirus pandemic. MUST CREDIT: Photo for The Washington Post by Misty Prochaska

Ryan Wittmann was wrapping up his first full week of working from home when he noticed an instant message from his boss: "I think I've got a project for you."

It was Friday, March 27, in Lincoln, Nebraska, and Wittmann and hundreds of his colleagues were getting the hang of running Union Bank & Trust from their makeshift home offices. Wittmann was working at a card table in his basement. Others had commandeered space in their kitchens and laundry rooms.

Their jobs were about to get harder. Congress and the Trump administration had just enacted legislation creating a $349 billion lending program for small businesses battered by the coronavirus. And they were counting on banks to get the money flowing, fast.

The national rollout would not be smooth. Some large banks were slow to start lending, while others left applicants hanging without funding for weeks. Small businesses in some regions had trouble finding a lender, even as large restaurant chains managed to get loans. And the federal government kept tweaking the regulations, confusing all involved.

One bright spot emerged, small businesses say: local banks that hustled to disburse loans to their communities as fast as they could. They did this by planning round-the-clock, shifting hundreds of employees to the effort, and cranking out approvals as soon as the program opened, even as the federal government was still clarifying the rules.

Union Bank & Trust is nowhere near the top of the banking leagues. Last year the family-owned institution, with 900 employees, was the nation's 202nd largest bank by assets, according to the Federal Reserve. Yet 72 hours into the emergency lending program, it ranked second in the nation for number of loans approved, according to the Small Business Administration, or SBA.

"We weren't sure how long the money would last. Would it be day one? We didn't know how long we had," Wittmann said. "We focused all our energy to get those approval numbers."

Citigroup didn't begin accepting applications until April 8, five days after the federal program began. Capitol One's participation appeared limited, with its website telling customers it would email them "when we are ready to take your application." JPMorgan Chase, the largest bank in the U.S., initially said it wouldn't be ready when the program launched April 3 but then scrambled to launch that afternoon, hours after the Treasury Department and the SBA issued the program's main rules.

By that time, Union Bank & Trust had already been processing applications for hours, and it wasn't alone.

Employees at family-owned Yellowstone Bank of Billings, Montana, located in the Mountain time zone, started trying to enter applications into the federal computer system, known as E-TRAN, late the night of April 2, as soon as the clock struck midnight on the East Coast. The bank disbursed its first loan to a customer on April 3, president Jay Harris said in an interview.

Redwood Credit Union in Santa Rosa, California, began accepting applications and submitting them to E-TRAN the morning of April 3. The nation's 43rd largest credit union usually has 20 employees dedicated to small-business lending but trained another 60 to handle the demand. "It was like drinking from a firehouse," chief executive Brett Martinez said.

All banks had a financial incentive to process the loans quickly. The government is paying them fees of 1% on loans over $2 million, and 5% on loans under $350,000. But the local banks said they had another incentive to move fast: Keeping local businesses healthy also ensures bank customers remain strong in the future.

"We made a priority to be one of the banks that offered this lifeline to the businesses we served because those businesses are the lifeblood of our bank," said Doris Robertson, a top executive at Union Bank & Trust.

Union Bank & Trust was founded in 1917, as the railroad and agricultural industries were turning Lincoln, the capital, into a bustling hub. The Dunlap family bought the institution in 1965 and still runs it, with family member Angie Muhleisen serving as chief executive, and her son Jason Muhleisen working as a vice president.

The bank started gearing up for the small-business program in late March, as it became clear that Congress was going to create a loan fund.

T.J. Casady, a vice president at the bank, had years of experience processing SBA loans, which the agency normally offers to help small businesses grow, or to recover from natural disasters such as tornadoes or floods.

Working from his laundry room at home - one of few quiet places in a house with six children - Casady studied the legislation that was moving through Congress. As he realized the SBA would be leading the program, he grew nervous. "That was one of our biggest concerns - how is the SBA system going to handle all that volume?" he said.

A key worry was the creaky E-TRAN system, which the SBA had long used to approve borrowers. Most banks, including Union Bank & Trust, had only one employee registered with the SBA to input data into E-TRAN.

"We knew it would be very difficult to get any volume through and approved with just one authorized user," Casady said. In the days before the program began, he started pestering the regional SBA office for extra users. When he didn't get an immediate answer, he called the SBA's office in Washington and got 20 extra employees registered on April 3.

Stephanie Dinger, a small-business specialist at the bank, started getting panicked calls from Lincoln-area entrepreneurs in mid-March, when the economy began shutting down after the White House declared a national emergency. Working from her children's art room - sometimes with a "Do Not Come In" sign on the door - she recruited more than a dozen people from other parts of the bank to field calls from entrepreneurs and keep them posted on the possibilities for federal aid.

"I had other areas of the bank saying, our business is really slow, how can we help? We had people reaching out right and left," she said.

On March 30, three days after the loan legislation had been signed and Wittmann had received that cryptic message from his boss, he took charge of the bank's efforts, forming a task force and holding twice-daily conference calls.

The task force decided the bank needed several new pieces of software to manage the program, including an online form applicants could fill out and submit on the bank's website, and an internal computer system to keep track of the applications.

The bank's software developers got to work, staying up most of the night April 1 to complete the tasks.

Brian Monaghan, the bank's head of software development, led that team from his basement office, taking a short break around dinner time to celebrate his daughter's birthday.

"In a feeling of guilt I came back down and my team was just humming. I was gone for maybe 20 minutes and [the work] was already hugely moved on from where we had been," he said. "I got a little bit choked up, I'm not going to lie."

The bank opened its online form on April 2, and collected more than 400 applications by day's end, Monaghan said.

Even as the clock ticked toward April 3, no one knew what time the government would open E-TRAN for applications, Wittmann said.

"We still weren't hearing anything from the SBA. Is this thing going to start at 12:01 on the 3rd, or at eight o'clock in the morning? We had someone check it at midnight just in case," he said.

E-TRAN would not accept their applications at that hour, so they went to sleep. Wittmann's colleague called him at 5:30 in the morning to say the system was up and running. "We sounded the alarm bells to say, This is live, this is live!" he said.

Initially the bank took applications from all comers, whether they were clients of the bank or not. Wittmann said the team was shocked to see applications pouring in from other states, including a bunch from California. "There is a Union Bank & Trust in California. Our assumption was, they got us mixed up," he said.

Rick Poore, a longtime bank customer who employs 29 people at a business that makes customized T-shirts, submitted his application online and got his loan a week later. "It was literally between life and death for us," he said.

He's using the money to keep his whole staff on the payroll. "It's not all altruistic on my part. When this turns around, I don't want to start with new people. Some of these people I've had for 15 years," he said.

Dean Hodges, another longtime bank customer who owns 39 Jimmy John's franchise restaurants, also got his loan in a week. Another franchisee he knows applied to Chase but never got any funds. "Chase told him the money ran out," he said.

Hodges said he has retained most of his employees, furloughing only the ones who wanted to stay home out of fear of infection.

Once E-TRAN started spitting out approval numbers, Melanie Petersen, an operations specialist at the bank, turned her attention to ensuring that customer data was transferring correctly to the final loan documents, which were dispatched to customers for electronic signature. She worked from her kitchen table, with her school-age daughters occasionally refilling her coffee cup.

It was heartening "realizing that the work I was doing was so much bigger than myself and has a lasting impact on so many people," she said.

After a furious weekend of lending, Leon Milobar, head of the SBA's Omaha office, called Casady to deliver some news. The more than 800 loans the bank had approved at that point gave it a second-place ranking nationwide. A regional bank in Montana was in first place, and another Nebraska lender, Pinnacle Bank, was also high in the rankings.

Milobar said he was surprised at first to see two Nebraska lenders at the top of the national heap. But he praised their hustle.

"Some of these community banks jumped on this opportunity and said 'We're going to make this happen,' " Milobar said.