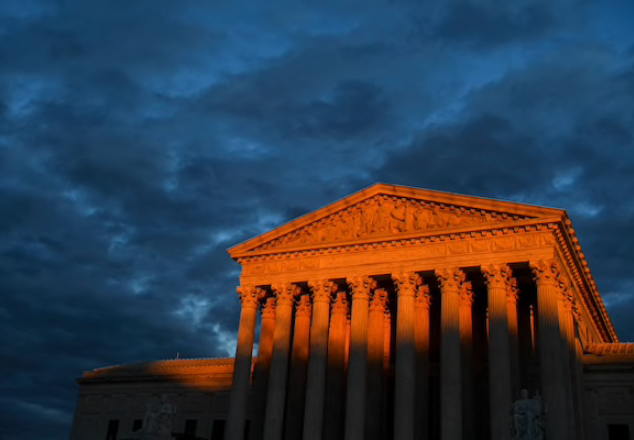 WASHINGTON - The Supreme Court on Thursday rejected the Trump administration's reading of a key part of the Clean Water Act as creating an "obvious loophole" in its enforcement, and gave a partial win to environmentalists in a case from Hawaii.

The court ruled 6-3 that a wastewater treatment plant in Hawaii could not avoid provisions of the act, which regulates the release of pollutants into rivers, lakes and seas, by pumping them first into groundwater, from which they eventually reached the ocean.

Justice Stephen Breyer's compromise language said an Environmental Protection Agency permit is required when a discharge is "the functional equivalent" of a direct release into navigable waters.

While environmentalists had won a broader victory in the lower court, they were happy to accept the Supreme Court's ruling.

"This decision is a huge victory for clean water," said David Henkin, an attorney for Earthjustice who argued the case. "The Supreme Court has rejected the Trump administration's effort to blow a big hole in the Clean Water Act's protections for rivers, lakes, and oceans."

While the case must go back to lower courts, Henkin said, "we fully expect that Maui County's sewage plant will be required to get a Clean Water Act permit [requiring] the county to protect the ocean from sewage discharges in a way it has refused to do to date."

The ruling decision was one of three the court issued on its website Thursday as justices continued to work mostly from home due to the coronavirus pandemic.

The court still must decide some cases argued earlier in the term, such as whether federal law covers LGBTQ workers from discrimination, and if the Trump administration may end the Deferred Action for Childhood Arrivals (DACA) program, which protects immigrants brought to this country as children.

In the Hawaii case, environmental law experts agreed that the court's decision will resonate.

Some lawyers criticized it as vague, and the EPA was noncommittal about how it would be implemented, emphasizing some specifics in the ruling rather than its bottom line.

"We will respect the court's finding that 'as to groundwater pollution and non-point source pollution, Congress intended to leave substantial responsibility and autonomy to the states,' " EPA spokeswoman Corry Schiermeyer said in a statement.

"In holding that the Clean Water Act requires a permit for the addition of pollutants to groundwater if it is the 'functional equivalent' of a direct discharge, the court unfortunately leaves some uncertainty for the public, including private property owners," Schiermeyer said.

All agree that sewage plants and others must get a permit under the Clean Water Act when they produce pollutants that go directly into a body of navigable water.

Maui County injects 3 million to 5 million gallons of treated wastewater into four deep injection wells about a half-mile from the shore. Some of that wastewater eventually gets into groundwater, which tests have shown eventually reaches the Pacific Ocean. Environmentalists said the polluted water had damaged a coral reef.

But the issue can also affect agricultural interests, mining companies and home builders, and some justices worried during arguments that it could even affect individual homeowners with septic tanks.

During the Obama administration, the EPA had sided with environmentalists in the case. It reversed its position after President Donald Trump took office and said discharges into groundwater fell largely outside the law. Only direct discharges into navigable waters were covered, it said.

Breyer wrote that the administration's interpretation could not be right. All a polluter would need do to avoid regulation would be, for instance, to end a discharge pipe just before reaching the water, he said.

"We do not see how Congress could have intended to create such a large and obvious loophole in one of the key regulatory innovations of the Clean Water Act," Breyer wrote.

The U.S. Court of Appeals for the 9th Circuit had ruled that a permit was required if the pollution was "fairly traceable" to a source. But Breyer said that was too broad, allowing "EPA to assert permitting authority over the release of pollutants that reach navigable waters many years after their release (say, from a well or pipe or compost heap) and in highly diluted forms."

He had proposed the "functional equivalent" standard when the case was argued, and he acknowledged then and in Thursday's opinion that it could be criticized as vague.

"But there are too many potentially relevant factors applicable to factually different cases for this court now to use more specific language," he said. He proposed a seven-factor test, and said it will evolve through EPA regulations and lower court decisions.

They said the majority's decision was not supported by the text of the law and leaves too many questions unanswered.

"The court makes up a rule that provides no clear guidance and invites arbitrary and inconsistent application," Alito wrote in his dissent. Water authorities won't know if they are covered, and "regulators are given the discretion, at least in the first instance, to make of this standard what they will. And the lower courts? The Court's advice, in essence, is: 'That's your problem. Muddle through as best you can.' "