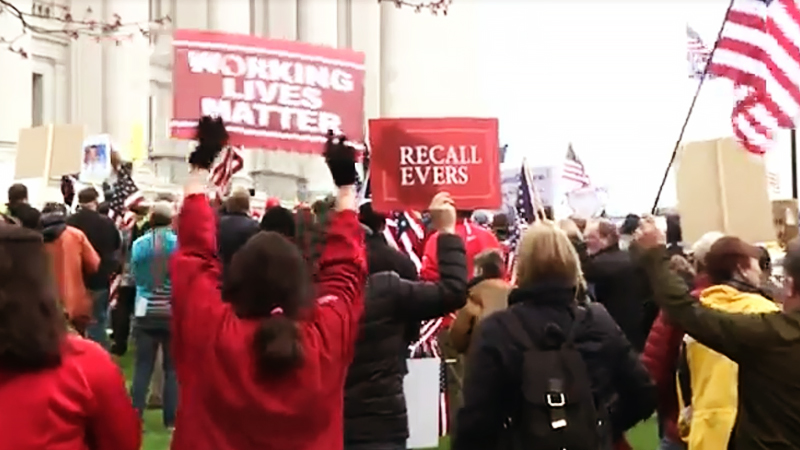 MADISON, Wis. - Carrie Ezzell is almost certain she had the coronavirus.

In late February, the 78-year-old day-care center operator had a high fever, a cough and was so fatigued she could barely move. She said her doctor ruled out the flu but wasn't sure what she was suffering from. "In my case, it put me down for about 24 hours. And then I had a cough for three weeks, and then I was fine," Ezzell said.

What has not been fine, she said, is what has happened to her family in the past month. Most of her children and grandchildren work in the service industry, including in salons and restaurants, and all had been laid off several weeks ago as Wisconsin ordered nonessential businesses to close and residents to stay at home to stop the spread of covid-19. Out of work and with little savings, they were struggling to pay the bills.

"I am not saying coronavirus isn't serious," Ezzell said. "But I have seen a lot of plagues and viruses and all kinds of junk go through in my lifetime, and I have never seen the government close itself down over something I believe I had and resembles a bad flu. It's ruining people's lives, especially young people who are just getting started. They need to get back to work."

On Friday, Ezzell, wearing a medical mask and carrying a sign that read "We are ALL needed," joined an estimated 2,000 people who converged on the steps of the Wisconsin state capitol building to protest the state's stay-at-home order, which Gov. Tony Evers, a Democrat, has extended to May 26.

Was her health at risk?

Probably, she replied. "But some things are more important."

Like other protests that have erupted here and in other states in recent days, attendees defied the advice of health-care professionals, who have urged social distancing. They stood shoulder to shoulder, many without masks or face coverings that officials say could prevent the spread of the novel coronavirus.

"Masks are ridiculous," said a 57-year-old man in the crowd, who declined to give his name because he said he didn't trust the media. "This is just some attempt by government bureaucrats to scare people about something that is just the flu so that they can take away our freedoms."

The rally highlighted the growing political rift over how and when states reopen in the wake of covid-19, a contagion that has infected more than 900,000 Americans and killed at least 50,000, and the measures elected officials have taken to protect the population from a virus for which there is no vaccine.

In Wisconsin, 5,356 cases have been diagnosed as of Friday afternoon, including another 304 cases on Thursday - the single largest daily increase in the state so far, in part because of expanded testing. So far, 262 people in Wisconsin have died, a smaller number than many other states.

State and local officials here insist the numbers would be worse if not for strict stay-at-home orders and have warned in recent days that if residents don't remain diligent about social distancing that cases could spike.

"We are at a fragile point," said Ben Weston, director of the office of emergency management in Milwaukee County, where the bulk of the state's cases have been reported. "Taking the right steps moving forward is going to be critical. Moving too fast will result in the positive trends we see."

But as in other parts of the country, there are increasing tensions between the urge to keep people safe and the growing desperation to get people back to work and the economy moving again amid fears of a downturn that some have predicted to be as bad as the Great Depression.

In Wisconsin, a small state that has become ground zero for the kind the uber-partisan warfare that has paralyzed Washington and other parts of the county, there is a growing divide between the Republican-led state legislature and Evers, a former educator and state superintendent of public instruction who was elected in 2018 after defeating then-Gov. Scott Walker, a Republican.

Last week, the state's top-ranking Republicans, Assembly Speaker Robin Vos and Senate Majority Leader Scott Fitzgerald, filed a lawsuit challenging Evers for extending the state's stay-at-home order that was due to expire April 24 to until after Memorial Day weekend, arguing that it will devastate the economy and leave Wisconsin "in shambles."

They have accused Evers of "unprecedented administrative overreach" and of not allowing other elected leaders in the state to play a role in determining how and when Wisconsin reopens. "There's no Republican that I know that isn't taking the virus seriously," Vos said in a virtual town hall with Milwaukee's WTMJ-TV. "There's no Republican that I know that thinks we should just go back to normal tomorrow. We need to have a gradual rollout."

Vos suggested Wisconsin could slowly open by region but argued the lawsuit was aimed at getting a "seat at the table." But Evers has accused GOP leaders of attempting a political coup at the expense of public health. "Let's just get real here, this is about power," Evers said in a call with reporters on Tuesday. "And if they win, they get it and it's going to take a long time for our state to recover."

The state's conservative-led Supreme Court has taken up the case and given the Evers administration until next Tuesday to file a response.

In the meantime, elected Republicans around the state have tiptoed around growing protests, including the one held Friday in Madison and another last weekend in the suburbs of Milwaukee, where more than 1,000 people turned out to wave signs outside a shuttered shopping center demanding that stores be reopened. GOP leaders have not attended the protests, but they have not publicly discouraged them either, even as health officials have warned about the safety of large gatherings.

In Madison, organizers were denied a permit by Capitol Police, who cited public health concerns. But law enforcement did not make any arrests or attempts to curtail the crowd, beyond blocking a truckload of port-a-potties that had been rented for the event. "If you want to go to the bathroom, and you can't, you know why," a speaker yelled through a megaphone, as the crowd loudly booed.

While organizers of both protests have argued the rallies have been organized by average people, not outside movement groups, and were not political in nature, both have looked and sounded like rallies for President Donald Trump. On Friday, hundreds of those who gathered on the lawn at the state capitol wore Trump shirts or hats. Some waved or draped themselves in Trump flags, while dozens of cars circled downtown Madison with windows painted with messages including "Trump 2020."

"Make no mistake, what is happening right now is a plot to undermine Donald J. Trump and keep him from winning the election and saving our country," a man shouted from the capitol steps before Friday's protest, which elicited cheers.

Nearby, a woman waved a sign that read, "Evil Cabal: Bill Gates, CDC, WHO, Fauci, Scarf Lady." Others waved signs criticizing Nancy Pelosi and Hillary Clinton. But most signs criticized Evers, some comparing him to a dictator. Attendees were asked to sign petitions calling for recall election while some waved professionally printed signs that read "Recall Evers."

From the capitol steps, a litany of speakers, many of them identified by first name only or not at all, spoke from a microphone attached to several large speakers that sent remarks loudly echoing across the square.

While some belittled the virus as not as threatening as public officials have claimed or poked at people who had turned out in masks, many questioned issues like how the government had deemed which businesses were essential or not, including why it was OK to buy products like shoes or flowers at Walmart but it was not OK to shop at small local businesses.

The speakers also included two medical professionals who questioned the severity of coronavirus in Wisconsin versus the state's reaction, including a woman who identified herself as a nurse at a local emergency room who said she and others were at risk of being furloughed because beds have been empty.

Timothy Allen, a family physician from Cudahy, a suburb of Milwaukee, warned of the threat of people being stuck inside and unable to work. In recent weeks, he had been treating more patients for depression and openly worried an increase in suicides should the economy continue to be disrupted.

"Staying indoors and worrying about the epidemic is more dangerous than going outside," Allen said. "According to the evidence, you're more likely to die by staying at home. You need to look at all lives, not just Covid lives."

On the road leading to the capitol building, someone had placed several homemade signs, including one that read: "Be kind. Stay at home." On the eve of the rally, health-care workers had placed thousands of candles to represent Wisconsin residents who had been infected by the disease. They wrote messages in paint, including the words "REOPEN KILLS." But by Friday, one of those messages had partially scrubbed away to simply read, "REOPEN."

"We are being pitted against each other right now. It's bringing out hate in people. We're getting ridiculed if you ask questions or disagree with what's happening right now. You're being told to sit down and shut up because your opinion does not matter, and you have to listen to the professionals," Madison Elmer, one of the event's organizers, told the crowd. "You know what, you shouldn't ever stop questioning the professionals. They don't live your life."