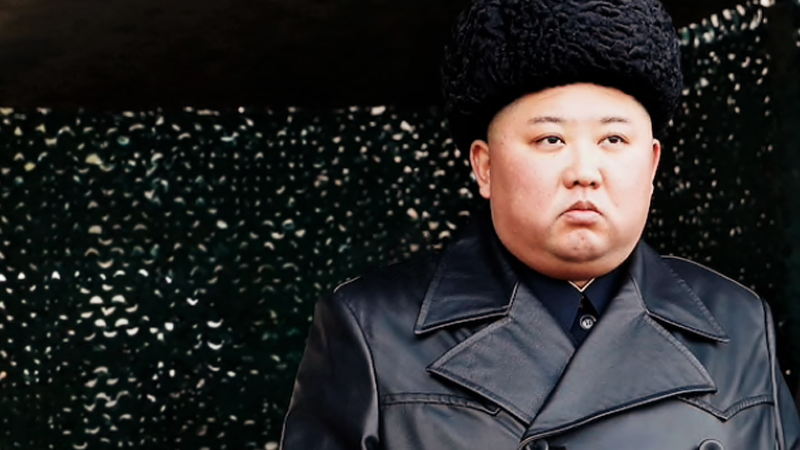 Where is Kim Jong Un? Is the devious despot dead after heart surgery? Is he lying in a vegetative state in a hospital bed? Or is he happily chain-smoking at his beachfront palace in Wonsan?

The North Korean leader's whereabouts have been the subject of much speculation around the world this past week, following unconfirmed reports that he'd had heart surgery. But his absence has also been noted in the capital Pyongyang, where the elites who support his regime have also gotten wind of the rumors.

They too have been asking about the chatter that Kim Jong Un - who has now ruled North Korea for almost 8 1/2 years, about eight years longer than many analysts gave him - is a goner.

There's been panic buying in the capital, with locals stocking up on everything from laundry detergent and rice to electronics to liquor. They started snapping up all imported products first, but in the last few days there's been a run on domestically produced items too, like canned fish and cigarettes.

Helicopters have been flying low over Pyongyang, trusted sources have told me, and trains within North Korea and also over the border in northern China have been disrupted.

This would hardly be the first time that reports of the death of a North Korean leader have been greatly exaggerated. Japanese and South Korean newspapers killed off his grandfather, Kim Il Sung, and his father, Kim Jong Il, multiple times in the years before either was actually true.

As Kim Jong Un's biographer, I've been bombarded with questions over the past week about whether the whispers are true this time.

I'm always very cautious with these kinds of tales, given the number of times they've turned out to be completely wrong. The short answer right now is: I don't know. None of us will know until either North Korea tells us, or he waddles back into view.

This time, however, the rumors feel different. The talk that Kim Jong Un had some kind of heart surgery has had a stubborn persistence, making the real question his condition.

Some experts agree that this time it seems like more than the usual scuttlebutt.

"We are potentially facing a serious crisis," said Andrei Lankov, a respected historian of North Korea, adding that he believes that something is "definitely wrong" with Kim.

On the flip side, there are plausible explanations for his absence, others say. Maybe Kim missed the ceremony on April 15 to mark his grandfather's birth - the most important day on the North Korean calendar - because of concerns about coronavirus.

Maybe Kim decided not to go because he's growing into the role. After all, he broke with tradition on New Year's Day and delivered a written plan for the year ahead instead of delivering it, State of the Union-style, as usual.

But already, the talk is having an impact on how the people most important to Kim - the Pyongyang apparatchiks who keep him in power - view their supposedly-invincible leader.

It's hard to exaggerate how serious an event his death would be for North Korea, for a regime that has always been run by a man called Kim.

The Soviets installed Kim Il Sung to lead the client state upon its foundation in 1948, and he passed the reins to his son, Kim Jong Il, in 1994. That hereditary handover in itself was unprecedented in Communist history, but the family did it again in 2011, when Kim Jong Il died and his 27-year-old son took over.

North Korea has now existed for longer than the Soviet Union, and Kim Jong Un has now been in power longer than any of his counterparts in the region: longer than the Japanese prime minister and the South Korean and Chinese presidents; more than twice as long as Donald Trump has led the United States.

Kim I and Kim II were both elderly when they died, and the latter in particular looked sickly. In both cases, there was a succession plan that had seen both inheritors elevated through the ranks of the military and the Workers' Party. And in both cases, the deaths were announced a few days later on television in a quivering voice by Ri Chun Hee, the Walter Cronkite of North Korea.

It was Ri who announced that Kim Jong Un, the "Great Successor to the revolutionary cause," was ready to lead them.

What if Kim Jong Un dies? There is no clear successor for him.

The Kims have claimed their right to lead through a mythical blood line they trace back to Mount Paektu, the legendary birthplace of the Korean people. Kim has constantly played up this Paektu blood line to make the case that he's a legitimate ruler.

This is the reason he often rides his white horse on that mountain, and this is also the reason he had his half brother assassinated in Malaysia in 2017. Kim Jong Nam could have theoretically claimed the top job because he also has this "Paektu blood" pulsing through his veins.

But there is no obvious male heir to Kim Jong Un. He's believed to have one son but he's barely a toddler. He has an older brother, an Eric Clapton superfan who was reportedly passed over for being "effeminate." And an uncle, his father's half brother who had been ambassador in Eastern Europe - a sort of cushy exile for almost four decades until he was recently recalled to Pyongyang.

The baby clearly isn't ready to lead, and the two others have no networks or profile inside North Korea.

That leaves only one obvious candidate: Kim's younger sister Kim Yo Jong, a woman who has taken on an increasingly prominent role in the regime, supporting her brother at summits and acting as his envoy to South Korea.

She also serves on in top roles, including running the propaganda division and making sure her brother always looks his best, and is clearly capable. She has been issuing statements in her own name in recent weeks - another piece of kindling for the rumor fire - but she has no military credentials. There has been no propaganda campaign around her. The state media has never even disclosed that she's the First Sister.

She also has one other major shortcoming: She's a woman.

In the strict Confucian traditions of both Koreas, which value age and maleness, Kim Yo Jong has neither. Asking the octogenarian old guard to accept Kim Jong Un was one thing; expecting them to serve a millennial woman (she's about 31) is quite another.

When I asked Lim Jae-cheon, a Kim family expert at Korea University in Seoul, about Kim Yo Jong's prospects a few years ago, he almost spat out his coffee. "She can't be leader," he said. "She's a female."