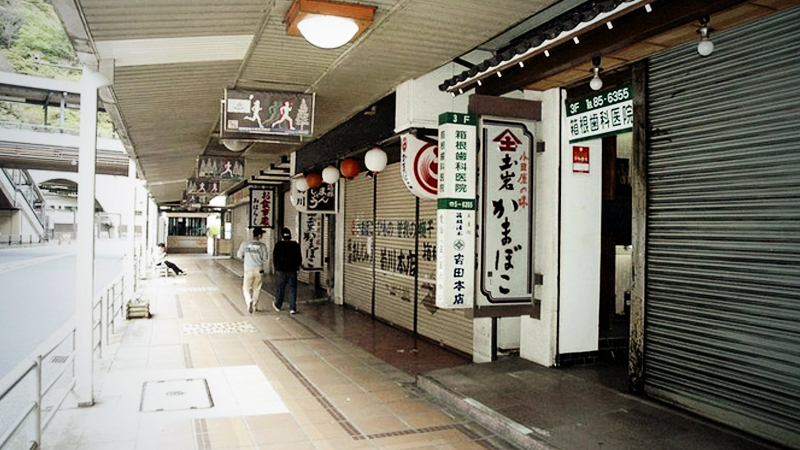 Shuttered shops are seen in Hakone, Kanagawa Prefecture, on Saturday.

Many hotels and tourist facilities will be closed during the Golden Week holiday period amid measures to prevent the spread of the novel coronavirus.

The crisis is set to deliver a devastating blow to businesses, prompting some local governments to establish support measures.

Hakone and Odawara, both in Kanagawa Prefecture, attract more than one million visitors during the Golden Week holiday period every year. However, parking lots and tourist facilities at sightseeing spots will be closed this year to deter people from visiting the areas.

Yumoto Fujiya Hotel has been closed since Sunday. “We’re in a tough situation. We have no other choice but to hunker down and get through this,” a hotel official said.

Although the number of foreign visitors to Japan has surged in recent years, domestic tourists are responsible for the largest share of tourism revenue.

Revenue from domestic tourism was about ¥22 trillion in 2019, compared to the ¥5 trillion contribution from overseas visitors.

The number of domestic tourists is particularly high during the Golden Week holiday period.

This year, however, the situation is completely different.

The tourism and health ministries issued a notice to industry groups including the Japan Hotel Association on Thursday asking for their cooperation with requests from prefectures to suspend operations, in an effort to deter people from traveling during the holiday period.

In Mie Prefecture, which sees a surge in visitor numbers at the local tourist site Ise Shrine every year, the prefectural government will give accommodation facilities that convince guests to postpone or cancel their stays ¥6,000 per guest, up to a total of ¥120,000 per facility.

Kagawa Prefecture, which is famous for its udon noodles, will give noodle restaurants that temporarily close ¥100,000.

Some firms had decided to suspend operations ahead of the government’s measures.

Mori Trust Hotels & Resorts Co. plans to close 17 of its 19 hotels through May 6. Most of them are located in resort destinations including Karuizawa, Nagano Prefecture, where about 70% of overnight visitors travel from urban areas. Although the occupancy rate in April has fallen to around 20%, it had received reservations for the Golden Week holiday that would have raised occupancy to 30-40%, according to the company.

“It is important for the tourist industry to deter people from traveling to put an end to this crisis as soon as possible,” a company executive said.