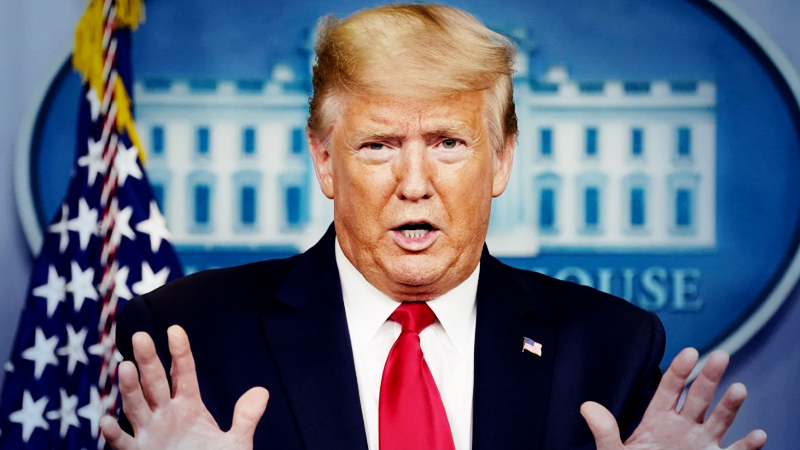 Confirmed cases of covid-19 in the United States rose above 1 million Tuesday, representing about a third of known cases worldwide, as President Donald Trump continued to defend his administration's record on providing tests the country will need to reopen safely.

The grim milestone was expected, even as some states move to lift restrictions meant to slow the spread of the disease.

The 1 million mark and a U.S. death toll of more than 57,000 so far suggest that closures of schools, businesses and public spaces in many parts of the country over the past two months have helped. Some public health models had projected about 100 million cases in the United States by May and an eventual U.S. death toll above 2 million if no measures were taken to prevent the disease's spread.

"It will go down to zero, ultimately," Trump said when asked about the caseload Tuesday, and about his prediction in February that U.S. cases would quickly dwindle to zero.

The United States has the world's highest number of confirmed cases, but Trump suggested Tuesday that the figure is misleading because "we're doing much, much more testing than anybody else in the world."

The number of covid-19 tests performed per 1,000 people in the United States is below the average of the 36 member states of the Organization for Economic Cooperation and Development, according to figures released Tuesday by the international body.

Trump also ordered meat production plants to remain open to head off a food supply shortage, despite mounting reports of plant worker deaths due to covid-19.

Governors of Texas, Ohio, Michigan and several other states laid out plans to begin relaxing coronavirus restrictions and allowing some businesses to reopen. But stay-at-home orders are being extended in other parts of the country, including the San Francisco area and hard-hit Louisiana.

Americans overwhelmingly support state-imposed restrictions on businesses and the size of public gatherings to slow the spread of the novel coronavirus, according to a new Washington Post-University of Maryland poll.

Americans also back a temporary halt to immigration, as ordered by the president, to deal with the crisis, the survey found.

The poll finds that Americans' concerns about becoming seriously ill from the virus have not eased in the past week. It also shows that they continue to give their governors significantly higher ratings than they offer Trump, who still draws mostly negative reviews for his handling of the crisis.

Around the world, New Zealand's month-long lockdown ended Tuesday, after officials said they had almost entirely eradicated the coronavirus, while Russia extended its non-working period until May 11 and announced a record 6,411 new cases.

Russian President Vladimir Putin on Tuesday ordered the government to come up with a package of new measures to soften the economic impact. The pandemic is testing Putin's leadership as he plans to remain in office for another 16 years. He has postponed a constitutional referendum that would lend legitimacy to his plan to dispense with a presidential two-term limit.

"Of course, I would like forced inconveniences to end sooner. I will reiterate that it would be careless and even dangerous to believe that the threat has declined and will definitely not affect us now," Putin said, warning that Russia has not yet reached the peak of the crisis.

French Prime Minister Édouard Philippe announced a tentative plan to lift what would be a two-month coronavirus lockdown starting in May.

"Never has the country been confined as it is today," he said. "And, obviously, this cannot be sustainable."

In the United States, Vice President Mike Pence received a covid-19 treatment update at the Mayo Clinic campus in Minnesota, where he was photographed meeting with staff and a patient while not wearing a protective mask. Doctors and others giving the vice president a tour were all wearing masks. In a since-deleted tweet, the clinic said Pence had been informed ahead of time about the facility's policy of wearing masks.

Trump has said that despite the recommendation of his top health experts, he himself did not plan to wear a face mask. Neither he nor Cabinet officials and experts who have briefed the press in recent weeks have worn masks while doing so.

Leaders of the Democratic-controlled House abandoned plans to return to Washington next week, less than 24 hours after members were told to prepare to meet, while the Republican-led Senate reiterated plans to return.

House Majority Leader Steny Hoyer (D-Md., said the change was made in light of advice from the congressional attending physician and as the coronavirus continues to spread in Washington and its suburbs.

"The numbers in the District of Columbia are going up, not down," he said.

Senate Majority Leader Mitch McConnell, R-Ky., had announced Monday that his chamber would return next week to "conduct critical business in person." In a tweet Tuesday, a spokesman said, "the Leader's statement from yesterday stands."

A coalition representing the nation's hospitals, health insurers and businesses called on Congress on Tuesday to provide additional financial help for the growing number of Americans during the coronavirus pandemic who are losing health coverage as they lose jobs.

More than 30 organizations - largely trade groups from across the health-care industry, providers of care and the U.S. Chamber of Commerce - sent a letter to the four top congressional leaders, proposing several ways to increase access to health insurance during the crisis.

The groups are hoping to influence another relief package being debated on Capitol Hill. The options, which industry leaders call a "menu," include new subsidies to employers to help them preserve health benefits during the pandemic, as well as helping more Americans afford to buy health plans through Affordable Care Act marketplaces by subsidizing premiums up to a higher income threshold.

Trump, an opponent of the ACA, has resisted that idea.

White House economic adviser Kevin Hassett said Tuesday that the Trump administration is "studying very carefully" the possibility of another round of stimulus checks beyond the one-time $1,200 payments sent to many Americans.

Speaking to reporters at the White House, Hassett raised the possibility that additional payments could be included in the next round of legislation responding to the economic fallout from the coronavirus pandemic.

"I think that that's something we're studying very carefully that I know that people in the House are as well," he said. "I expect that it's very likely there will be a phase four deal, and we're going to be speaking with the president throughout the week about what he thinks should be in there."

Recipients of federal stimulus money began receiving letters summarizing the transactions this week, and some were surprised or dismayed to see that the communications were signed by Trump.

The rush to get money to tens of millions of people has resulted in payment errors, including several detailed by Washington Post financial columnist Michelle Singletary on Tuesday.

The Coronavirus Aid, Relief, and Economic Security (Cares) Act, signed into law March 27, provides a $1,200 refundable tax credit for individuals and $2,400 for joint taxpayers. The Treasury Department and the IRS reported last week that an initial 88.1 million payments worth nearly $158 billion had been issued.

The law says a letter listing the payment amount and method, among other details, should be mailed to a taxpayer's last known address 15 days after a stimulus payment is sent. It didn't read like a standard letter from the IRS.

"Just as we have before, America will triumph yet again - and rise to new heights of greatness," Trump wrote.

He introduced individual information about the stimulus payment by writing, "I am pleased to notify you . . ."

While the envelope says it comes from the Treasury Department and the IRS, once it has been opened, the letterhead says, "The White House."

The Treasury didn't immediately respond to questions about complaints that the letter was inappropriate.

For a fourth day in a row, Trump did not lead a coronavirus task force briefing. As he did Monday, Trump instead appeared at economic-themed White House events.

Trump and his daughter and adviser Ivanka Trump invited a group of small-business owners and employees who have participated in the Paycheck Protection Program, which Trump claimed has saved thousands of jobs and is now processing a second round of loans.

A handful of publicly traded companies say they aren't planning to return loans received from the small-business rescue program, despite pressure from the Trump administration to repay the funds.

Companies in the hotel, cruise ship and medical device sectors said they are qualified to receive the money under the Paycheck Protection Program and need the funds to stay in business. Their resistance comes days after the Small Business Administration suggested dozens of publicly held companies with "substantial market value" were not the intended recipients of the funds.