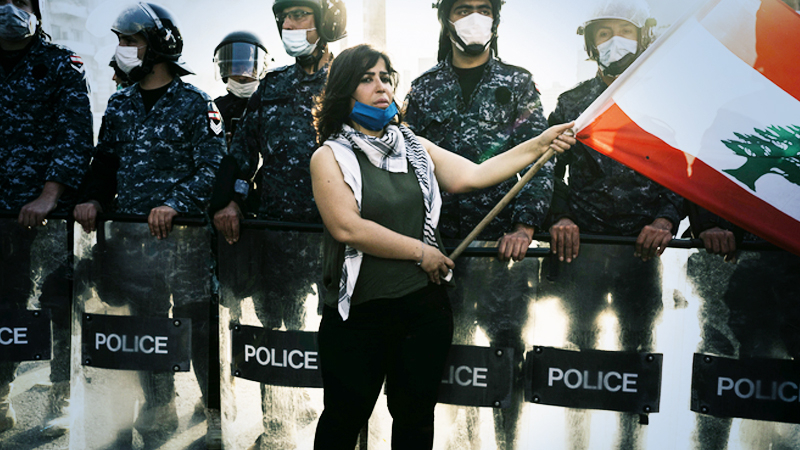 A group of protesters occupy an important traffic intersection in central Beirut. MUST CREDIT: photo for The Washington Post by Lorenzo Tugnoli.

BEIRUT - Violence escalated Tuesday in the northern Lebanese city of Tripoli as protesters angered by the collapse of the country's currency and spreading economic upheaval burned down a series of banks and countered volleys of tear gas by pelting security forces with stones.

These latest arson attacks came at the end of a large funeral for 26-year-old Fawwaz al-Samman, who died Monday from gunshot wounds, which his sister said on Facebook he had suffered during clashes with the army. The army released a statement Tuesday expressing regret for his death, without claiming responsibility, and announced it is opening an investigation into the incident.

As mourners filled the streets of Tripoli for his funeral, they dubbed him "Martyr of the Hunger Revolution."

Lebanon faces its most severe economic crisis in decades, and it has been worsening since September. Hundreds of thousands of protesters took to the streets in October, ultimately forcing the prime minister and his Cabinet to resign. Then, the coronavirus struck, compelling already shaky businesses to shutter their doors and putting countless people out of jobs.

When Lebanese officials set a curfew and curbed movements in mid-March in response to the pandemic, the government gave itself a break from the street unrest and protesters retreated home.

But shortly after the government announced Friday a five-phase plan to reopen the country, the protesters - overwhelmingly young and frustrated with the severe lack of job opportunities - emerged from their quarantine. Molotov cocktails destroyed a bank branch late on Saturday in the southern city Tyre. The following two nights, more banks were attacked and set on fire across the country. Protesters shut down highways. The army retaliated with tear gas and rubber bullets.

"We stopped the revolution because of corona," said Antoine Saad, a lawyer and lecturer who was protesting Tuesday evening in Beirut. But now, he said, "bankruptcy is coming. Hunger is coming. Of course we're going to rise to change the whole of the political class."

The Lebanese pound, long pegged at around 1,500 to the dollar, has lost three times its value since October, reaching 4,500 to the dollar on black markets this week - a steep drop from 3,000 just two weeks ago.

The country now has at least five valuations for its currency: the peg for foreign exchange dealers is different from that for incoming transfers, which is different from rates offered by banks. At least one Lebanese bank added "USD Market Price" to its ATM currency options, allowing depositors to withdraw Lebanese pounds from their dollar account at 2,000 to the dollar.

Anger toward banks gained fresh momentum as the pound collapsed. Last week, Prime Minister Hassan Diab sharply criticized the performance of central bank governor Riad Salameh, who has held his post since 1993. His policies have included having banks transfer customers' dollar deposits to the central bank to shore up the country's foreign currency reserves.

The shortage of dollars - which are used in everyday transactions in Lebanon - and the crash in the value of the pound has undercut the country's ability to pay for imports, including essentials such as wheat and oil. Banks have stopped giving short-term loans to businesses and no longer provide them dollars for imports, so many now depend on expensive black market dollars.

Inflation has reached 50 to 60% since the start of 2020, said Jad Chaaban, an economics professor at the American University of Beirut, compared with 5% in 2019.

"We have an economic recession that was coupled with hyper inflation; people lost their purchasing power; poverty increased dramatically. So people were just fed up and they went out on the street," Chaaban said.

In October, protesters had largely trained their anger on the corruption long endemic in the political elite. Chaaban predicted earlier this year that the unrest would turn ugly once people no longer had the means to pay bills and started going hungry. That time has now come.

The price of ful, a fava bean staple common in the region, was up 55% in March over a year earlier, said Lebanon's Consultation and Research Institute. The price of sugar has risen 67%, while wheat, tea, rice and cigarettes have all gone up nearly 50% in price.

In a video from Sunday night, one of the protesters blocking a highway squared off with policemen as tires burned in the background.

"I'm hungry and standing in front of you. Strike me," said the protester.

"I'm hungrier than you," the officer replied forcefully.

"Then what are you waiting for?" another protester screamed, urging the police to join them.

On Tuesday, protesters shut down a central highway junction in Beirut. Encircled by riot police and army, the protesters chanted about poverty and hunger. "The whole people are saying: strike, burn, bomb a bank," one woman led a chant. Amid the mayhem, a lone officer walked around, handing out face masks.

Farah Rimmo, a 22-year-old graphic designer, said she believes the government benefited from the chaos of coronavirus. She listed the values of aid packages sent to the government from France, the World Bank, UNICEF, and demanded transparency about where the money went.

"These are militias, not political parties," said her 62-year-old father, who did not give his full name. He said he is tired of Lebanon's sectarian politics, in which government jobs and services are allocated along religious and ethnic lines and complained that one of his sons tried to get work as a government building cleaner but couldn't because the political parties had gobbled up all the jobs for loyalists.

"Me, at my age, what do I want? I want social security, retirement. I want to be treated," he said, displaying a leg wound that had reopened, decades after he sustained it. He said he cannot afford to go to a hospitals for treatment.

"I see poor cabdrivers and want to cry. This guy, in his 60s and 70s, shivering over the steering wheel, doesn't even have enough money to eat," he said.