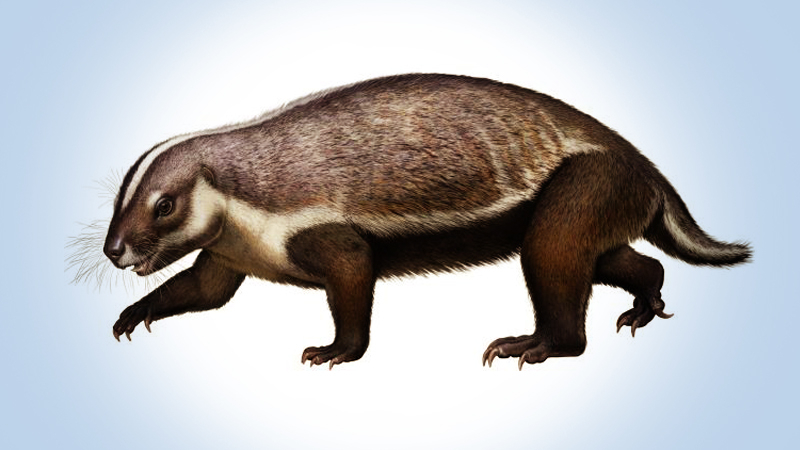 This life-like reconstruction of Adalatherium hui from the late Cretaceous of Madagascar shows off the creature’s weird-looking body and plentiful whiskers. (Image: © Denver Museum of Nature & Science/Andrey Atuchin)

Sixty-six million years ago, before the age of dinosaurs came to a fiery close, most mammals were puny and shrew-like. Which means a newly described Madagascar critter, though the size of a groundhog, was a giant of its day. And it packed a titan's worth of oddities into its 7-pound frame.

The ancient animal's fossils, the oldest mammal skeleton found in the Southern Hemisphere, show teeth and bones unlike anything seen before or since. "It's a game-changer," said Ohio University paleontologist Patrick O'Connor, who was not a part of the study. Though the researchers found a single skeleton, O'Connor said its remarkable preservation let scientists analyze the mammal in ways they previously "could only dream of."

Scientists, including researchers in Madagascar and the United States, described the animal in the journal Nature on Wednesday. They named it Adalatherium hui - the first name, its genus, translates to "crazy beast"; the second, the species name, is in honor of the deceased mammalian scientist Yaoming Hu.

Adalatherium helps fill in the gaps of mammalian evolution that occurred during the time of the dinosaurs. Scientists know quite a bit about mammals from the Northern Hemisphere, especially China, O'Connor said. But that knowledge vanishes south of the equator.

Until 180 million years ago, the familiar continents of the Southern Hemisphere were mashed together in a landmass known as Gondwana. The mammals that lived there, which scientists call gondwanatherians, were known only from scattered fragments of jaw, teeth and a lone skull. Until this discovery.

Paleontologists extracted the skeleton from a crevice in northwestern Madagascar in 1999. But the scientists did not know they had found a mammal. The section of sandstone they removed contained an ancient reptile. Adalatherium was preserved just underneath. A closer examination of the rock, at Stony Brook University in New York, revealed Adalatherium's true furry nature. (The skeleton remains in New York; the head was removed for closer study and is in Denver.)

Mammals from this time and place are exceedingly rare. Of the 20,000 dinosaurs, frogs, crocodiles and other specimens found at the Madagascar site under a team led by study author David Krause, 12 are mammals.

"I have known of this particular fossil since 2003," said Zhe-Xi Luo, a University of Chicago paleontologist who was not involved with this research. Luo met Adalatherium when Krause packed the skeleton in a bag, transported it to Minnesota and showed it to fellow scientists, who - under a code of professional secrecy - admired the bones at a Society of Vertebrate Paleontology meeting.

The skeleton guided scientists on an anatomical trip from the snout, over its gentle hump of spine, to the tip of the tail. Even details as small as sesamoid bones, the hard nubs affixed to tendons, remain. Its ribs contain fossilized soft tissue, suggesting the animal was alive when it was buried in a mud flow.

"It's the most complete specimen of a gondwanatherian mammal," Krause, a vertebrate paleontologist at the Denver Museum of Nature & Science, told reporters Tuesday.

Adalatherium's body is a fusion of odd traits. "It is like the metaphorical chimera," Luo said. The ear structure resembles that of an echidna's (the spiky, egg-laying mammal from Australia). Its forelimbs sit close together, like kitten legs. The hind limbs are splayed to the side, mimicking a bodybuilder's squat.

It had ever-growing front teeth. Weirder still are the pointy back teeth that Krause said seem to have arrived from "outer space." Given the shape of these unusual chompers, researchers surmise that Adalatherium ate plants.

It had "very strong back muscles," said study author Simone Hoffmann, a New York Institute of Technology anatomy professor. It may have walked while bending its backbone from side to side. (Picture how a lizard sashays while scampering up a screen door.)

Its skull, Luo said with a laugh, "is like nobody's." The head has a mysterious hole above its snout that baffles the paper's authors, even after nearly two decades of study.

Typical mammals from this era, the Mesozoic, weighed 100 grams - as light as a deck of cards - or less. "Adalatherium is quite a bit larger than your average Mesozoic mammal," said paleobiologist Gemma Benevento, a postdoctoral researcher at Britain's University of Birmingham who was not involved with this study. At an estimated 3 kilograms (more than 6 pounds), it weighed "about the same as an adult groundhog," she said.

Adalatherium's jumbo size may have been helped along by the plate tectonics that tore apart Gondwana. As a rule, supercontinents, like boy bands, must break up: First India and Madagascar sheared off Africa. Then, 88 million years ago, the Indian subcontinent split from Madagascar.

"Islands tend to be relatively unique in their composition," Benevento said, "possessing species found nowhere else."

Even though Adalatherium and its contemporaries vanished in the aftermath of the asteroid impact 66 million years ago, what happened once has happened again: When life found a way to Madagascar, it got weird. Madagascar's primates, the lemurs, evolved into 100 species. Moths evolved tongues longer than their wingspans to drink the nectar of local orchids. About 99% of Madagascar's land-dwelling vertebrate species live only on the island.

This ancient animal "is the best evidence yet how Mesozoic mammals might have evolved in isolation on islands," Krause said. "Mammalian evolution on islands does lead to bizarreness."