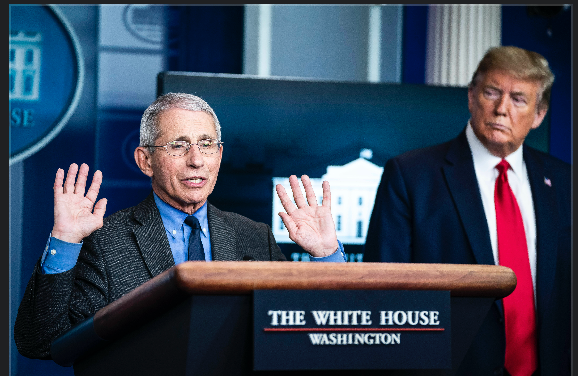 WASHINGTON - The Trump administration is racing to develop a coronavirus vaccine that could be fielded nationwide by January, U.S. officials said Thursday, as national stay-home guidance was about to expire.

The January timeline represents a fast pace for vaccine development but still means there would be no failsafe protection from the new virus until long after most Americans are likely to have returned to work or school and until after the November presidential election.

"We want to go quickly, but we want to make sure it's safe and it's effective," he said on NBC's "Today" show. "I think that is doable if things fall in the right place."

Fauci, the director of the National Institute of Allergy and Infectious Diseases, said manufacturers of the best potential vaccine candidates would increase production "at risk," meaning before they are proved to work, to speed up the process.

Bloomberg News, which reported on the effort Wednesday, found that taxpayers rather than drug companies would shoulder the financial risk of failed vaccine candidates. Though costly, this could result in one being available months earlier than under the typical process.

The potential January date would be on the early end of the 12- to 18-month timeline that Fauci has repeatedly given for a vaccine.

President Donald Trump said it is not too optimistic to try to produce about 300 million doses of vaccine in eight months, enough for the entire country.

"No, I'm not over-promising," the president said at the White House. "I don't know who said it, but whatever the maximum is, whatever you can humanly do, we're going to have. And we hope we're going to come up with a good vaccine."

He added that "we're going to fast-track it like you've never seen before, if we come up with a vaccine."

Asked who is in charge of the effort, Trump said he is.

"I think probably, more than anything, I'm in charge. And I'm the one that gets blamed. And I get blamed anyway," Trump said.

"Don't forget, if we come up with a vaccine in record time, they'll say I should have done it faster. But we have a lot of good - a lot of good possibilities."

The national stay-home guidance expired Thursday, but many states have left their own orders in place.

Protesters stormed the Capitol in Michigan as the legislature debated extending coronavirus restrictions imposed by Gov. Gretchen Whitmer, a Democrat. Some waved guns outside the Capitol in Lansing, while others affiliated with the "American Patriot Rally" tried to get onto the House floor but were blocked by law enforcement. The rally was called to demand that businesses reopen.

Later in the day, Michigan's House decided against extending the emergency declaration.

Many U.S. states are relaxing their restrictions, with more than half set to be partially reopened by the end of this week, though others such as California are moving more cautiously.

House Speaker Nancy Pelosi, D-Calif., said Thursday that Democrats intend to direct about $1 trillion to state and local governments in the next coronavirus spending bill.

Pelosi said states have $500 billion in needs, a figure cited by the National Governors Association, while municipalities and local governments have sought a similar amount. She said the money could be made available to spend over several years.

"I talked about almost $1 trillion right there," Pelosi said at a news conference, adding that "we do have other issues that we want to deal with" in the next spending bill.

The $2 trillion Cares Act that Congress passed in late March included $150 billion for states, but the money was restricted to use for coronavirus response, which some governors and mayors have complained has made it difficult for them to tap to help their budgetary needs.

Trump appeared cold to the massive new bailout Pelosi had previewed and to proposals for more direct support payments to individuals.

"Well, we're talking about that. I know a lot of people are talking about it. But we've given a lot of stimulus," Trump said during a White House meeting Thursday with New Jersey Gov. Phil Murphy, a Democrat.

Trump predicted a swift economic rebound in the second half of the year, beginning before the presidential election in November.

Trump said voters should judge his handling of the pandemic when deciding whether to reelect him just over six months. "Sure. I think they do," Trump said. "I think they have to do a number of things. They do have to do that."

Trump said his administration's response has been "spectacular," including rapid production of ventilators.

Republicans are more likely than Democrats to say that they would be ready to return to normal day-by-day activities if there were no government social distancing restrictions, a new Gallup survey finds.

The survey finds that 44% of Republicans would return to normal "right now" if given the chance. That compares with 4% of Democrats and 22% of independents who say the same.

The Republican figure has jumped 19 points since Gallup posed the same question earlier this month, a period that coincides with several governors in Republican-led states being more aggressive in easing social distancing restrictions.

The economic toll from the coronavirus pandemic became clearer Thursday, with nearly 4 million new jobless claims and an estimate from a Trump administration economic adviser that about 1 in 5 Americans was out of a job in April.

The current virus-related downturn has erased all job gains since the Great Recession more than a decade ago.

More than 3.8 million Americans filed for unemployment benefits last week, according to the Labor Department, bringing the total number of claims to roughly 30 million in six weeks.

White House economist Kevin Hassett predicted that April unemployment would be about 19%, up from 4.4% in March. U.S. unemployment was about 25% at the peak of the Great Depression in 1933.

"Well, I think we're gonna have a great third quarter that's going to be a transition" to a "great" fourth quarter, Trump said.

Many Americans have stopped paying their rent and other bills, and economists are predicting any recovery will stretch well into 2021, and possibly beyond.

Murphy, the New Jersey governor, said his hard-hit state is beginning to reopen parks and other recreation areas, but California is expected to close all beaches and state parks after thousands of people flocked to beaches last weekend in violation of the state's social distancing restrictions.

Iowa, Oklahoma and other states reopening soon amid the coronavirus outbreak are issuing early warnings to their worried workers: Return to your jobs or risk losing unemployment benefits.

The threats have been loudest among Republican leaders in recent days.

Vice President Mike Pence wore a face mask during a trip to Indiana on Thursday, after he was roundly criticized this week for not wearing a mask during a tour of the Mayo Clinic.

His wife, Karen Pence, said he did not know that hospital policy required it until after he left the facility.

Her assertion during an appearance on "Fox & Friends," appears to contradict statements from the clinic that the vice president's office had been informed of the rule before his Tuesday visit to the Minnesota hospital.

The Trump campaign criticized a video published by Chinese state news agency Xinhua that mocked the U.S. response to the novel coronavirus, calling the video a "brazen" attempt to cover up Chinese lies.

The video, published overnight, portrays a conversation between China and the United States about the coronavirus, with both countries represented by Lego toy characters.

"We are always correct, even though we contradict ourselves," the U.S. side says toward the end of the video.

"That's what I love best about you Americans - your consistency," the Chinese side responds.

Spain, one of the European countries hit hardest by the pandemic, reported a 5.2% drop in gross domestic product for the first quarter, its largest plunge in more than a century. Across the European Union, however, new unemployment figures showed only slight job losses; government programs largely protected employment.

As some nations look toward easing restrictions, Japan is expected to extend its state of emergency by a month. Sri Lanka, meanwhile, reimposed a 24-hour lockdown after infections jumped amid eased restrictions.

Britain is on track to surpass Italy as the hardest-hit country in Europe after deaths outside hospitals are included, raising the toll to 26,000, just shy of Italy's 27,000 dead. The U.S. death toll has passed 62,000.