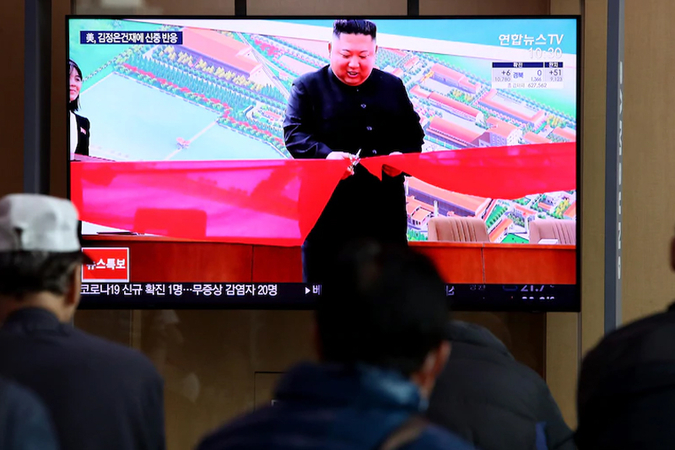 Kim's absence from the public eye had fueled speculation he might have fallen ill or even died, although it is not unusual for him to be absent for similar periods. His visit was reported by state radio, according to South Korea's Yonhap News Agency.

Kim visited the Sunchon Phosphatic Fertilizer Factory on Friday, Yonhap reported, and was joined by his sister Kim Yo Jong and other aides.

"Our beloved and respected Supreme Leader Kim Jong Un appeared at the building completion ceremony and cut the ribbon himself," the North Korean radio report said.

Kim Jong Un was met with "thunderous applause" from ceremony attendees for "bringing new changes in advancement of the fertilizer industry" and leading the country to victory with a "stronger self-reliant economy," according to the broadcast carried by Yonhap.

A photograph was released on state media showing Kim cutting a red ribbon at the factory. Kim last visited the fertilizer factory, which lies some 30 miles north of Pyongyang, in January when it was still under construction. This isn't Kim's first prolonged absence from the public eye this year. He laid low for three weeks between late January and February, and wasn't seen on state media for another 13 days between the middle and end of February.

The rumors about Kim's ill health followed his failure to show up for celebrations of his grandfather's birthday on April 15, a report on a South Korean website that he had undergone a cardiovascular operation and was recovering, and a CNN report suggesting he may have fallen gravely ill.

But South Korean officials insisted Kim was alive and still in charge of the country, and satellite images showed Kim's personal train arrived at a railway platform reserved for his use in the coastal resort of Wonsan some time between April 15 and 21. His presence at Wonsan was also suggested by the fact that luxury boats owned by Kim were spotted outside his personal villa.

Officials in the United States and South Korea believe Kim retreated to Wonsan after becoming aware in mid-April that subordinates in his vicinity had suffered from a fever, according to two people familiar with the situation.

Publicly, Pyongyang claims that no one in North Korea has contracted the coronavirus despite the understanding of U.S. and South Korean intelligence officials that the North has quarantined scores of its own people near the Chinese border in response to the spreading virus.

Kim's disappearance without an explanation may have been to avoid acknowledging concerns that individuals in his orbit may have contracted the disease.

U.S. and South Korean officials were also skeptical that the leader had died, after signals intelligence indicated that no unusual uptick in communication had occurred in Pyongyang, said people familiar with the situation.

Secretary of State Mike Pompeo, who had been asked about Kim's status repeatedly, never leaned into rumors that the leader had died and emphasized continuity in U.S. policy.

"Our mission remains the same. It's to deliver on the agreement that Chairman Kim made with President [Donald] Trump back in Singapore, and that's the fully denuclearized, verified denuclearization of North Korea," Pompeo told reporters during a news conference on Wednesday.