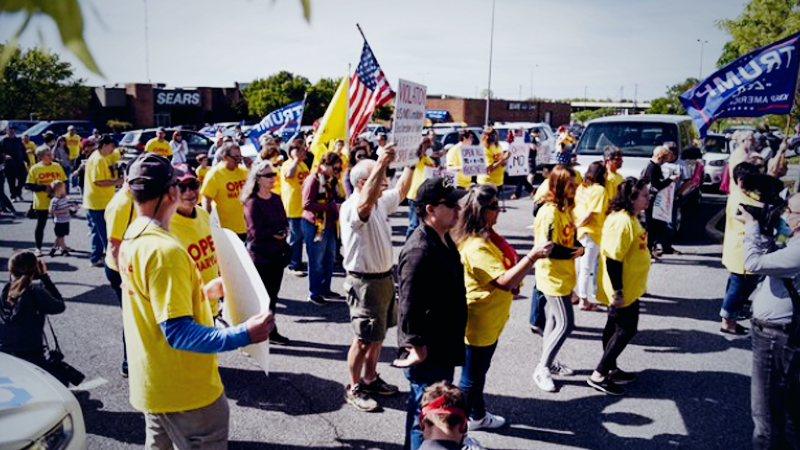 Protesters gathered Saturday as part of Reopen Maryland. The group drove from Frederick to Salisbury ]to demand an end to restrictions imposed by Gov. Larry Hogan to stem the spread of the coronavirus. MUST CREDIT: Photo for The Washington Post by Sam Mallon

A coalition of religious leaders, business owners and state lawmakers are suing the administration of Maryland Gov. Larry Hogan over his stay-at-home orders meant to slow the spread of the deadly coronavirus.

The lawsuit asks a federal judge to intervene to block Hogan's restrictions on certain businesses and religious gatherings, and presses the state to consider less restrictive alternatives.

Hogan, a Republican, pushed back against the pressure to lift social distancing policies, saying Sunday that he respects the rights of protesters, but it is too soon to safely reopen the state.

"Everybody has a right to protest and express their feelings," Hogan said during an appearance on CNN's "State of the Union."

"Sadly, we had far more people die yesterday in Maryland than we had protesters," Hogan said, referring to a "Reopen Maryland" demonstration Saturday from Frederick to Salisbury.

The state reported 59 additional coronavirus deaths on Saturday, and 30 on Sunday.

The legal action is the latest sign of frustration with fallout from the economic and cultural shutdown intended to contain the pandemic. Hogan and other leaders throughout the country are facing protests from residents who want to reopen the economy more quickly.

Hogan has said he won't consider lifting Maryland's stay-at-home measures until the state sees either a consistent plateau or downward trend in hospitalizations. Hospitalizations were down slightly for the third day in a row Sunday morning, according to state data.

In the court filing, some of Hogan's fellow Republicans say the governor is picking and choosing which businesses can continue to thrive during the pandemic, while violating the constitutional rights of individuals to gather to worship or engage in political speech.

Big box stores like Lowes and Walmart "are permitted to have hundreds of cars and people because the Governor chose them to be 'essential' businesses. However, under the same orders a church may not have anyone in its buildings with limited exceptions for 'virtual' services," according to the filing from Delegates Dan Cox, Warren Miller, Neil Parrott and Robin Grammar.

The religious leaders involved in the lawsuit say their congregations do not have the equipment to broadcast worship services online or to host drive-in services, and that many of their members do not have the resources to watch online.

Among the businesses, Adventure Park USA in Frederick County said it will lose $700,000 during the spring season if it cannot open in May and has already taken out a $150,000 loan to meet its tax obligations.

Cox, a delegate who represents Frederick and Carroll counties, said in the court filing that he was told by Hogan's advisers he could be arrested for attending and speaking at a rally protesting the stay-at-home orders.

Hogan spokesman Michael Ricci said Sunday that Cox was never told he could not speak.

"We fully respect Delegate Cox's right to protest and express his feelings, but that doesn't entitle him to make false and baseless claims."