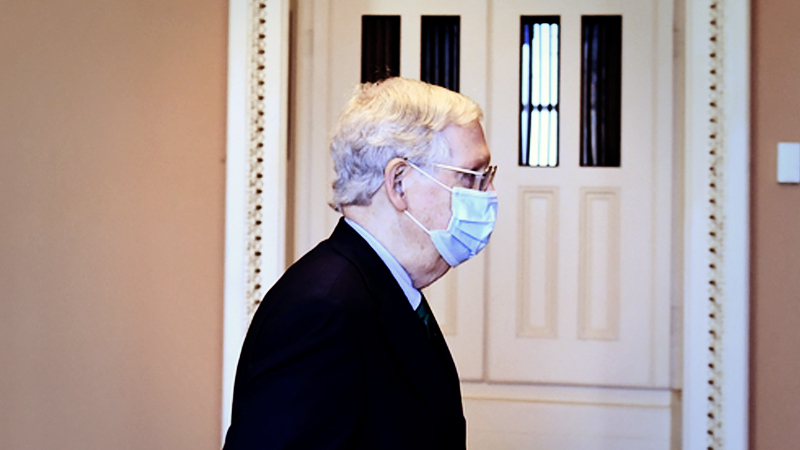 Senate Majority Leader Mitch McConnell, R-Ky., walks to his office at the Capitol. On Monday, the Senate reconvened for the first time in five weeks. MUST CREDIT: Washington Post photo by Matt McClain.

WASHINGTON - In eerily quiet hallways, with masks and disinfectant wipes aplenty, the Senate started to forge its new normal Monday - assembling en masse in Washington for the first time in five weeks amid the coronavirus pandemic.

The adaptations made by what is perhaps Washington's most hidebound institution were unmistakable, if uneven.

Most staff members kept masks on as they worked on the Senate dais and ringed the ornate chamber. Meanwhile, senators did not always follow health experts' guidance to reduce the risk of spreading the deadly disease.

Senate Majority Leader Mitch McConnell, R-Ky., quickly set the tone for the Republican majority, announcing on the floor that, after weeks of telework, "the time has come for us to continue conducting our nation's business in ways that are only possible with senators here, in the Capitol." He pointed to the need to process national-security-related nominations and reauthorize key foreign surveillance authorities.

"The Senate is going to be as smart and safe as we possibly can, and we are going to show up for work like the essential workers that we are," McConnell said. "Our bosses are the American people, and they're counting on us to keep on serving."

But Democrats expressed clear discomfort with being summoned back to the Capitol - for what they said were reasons that had more to do with politics than with addressing the mounting health-care crisis in the country.

Sen. Patty Murray, D-Wash., the No. 3 Democratic leader, stayed out of the Capitol entirely. Sen. Thomas Carper, D-Del., spoke on the Senate floor through a surgical mask. And a somber Sen. Richard Durbin, D-Ill., the No. 2 leader, quietly noted in a lengthy speech that the covid-19 death toll - now officially more than 68,000 - included "my friends and people I know, members of my family."

"There can be no doubt that this will be one of the strangest sessions of the United States Senate in modern history," said Minority Leader Chuck Schumer, D-N.Y., noting that many Senate offices would remain deserted, with staffers working from home, while senators speaking on the floor would wipe down their desks and refrain from passing copies of their speeches to the young pages as they would typically do.

"And we will not do what comes naturally to every public official - shake hands," he added. "But the American people are watching us right now. They expect us to do our jobs. They expect us to come together to address the issues that really matter."

That, Democrats maintained, did not include the business that McConnell had thus far scheduled. The initial floor business Monday was to confirm a new inspector general for the Nuclear Regulatory Commission. The nominee, federal prosecutor Robert Feitel, was confirmed on an 87-to-0 vote.

McConnell defended Feitel's nomination as a "nuclear watchdog" whose confirmation, he said, had been unfairly blocked by Democrats for months. He said numerous Senate committees would undertake coronavirus-related hearings this week.

But Democrats pointed to the hearings that were not happening - featuring Trump administration officials with direct responsibility for the coronavirus response. In a memo Monday, the White House informed lawmakers that no member of the coronavirus task force could accept invitations to testify before congressional committees without the permission of chief of staff Mark Meadows.

"All other departments, agencies, and witnesses may accept hearing invitations, however, agency resources should still be prioritized toward the covid-19 response," said the memo from the White House legislative affairs office.

The memo came a few days after the White House blocked Anthony Fauci, director of the National Institute of Allergy and Infectious Diseases, from testifying before a House panel this week, though Sen. Lamar Alexander, R-Tenn., confirmed Monday that Fauci will appear next week before the committee he chairs, alongside the heads of the Centers for Disease Control and Prevention and the Food and Drug Administration, and the White House covid-19 testing czar.

Democrats highlighted one hearing this week, a Wednesday proceeding featuring Trump's nominee to the powerful U.S. Court of Appeals for the District of Columbia Circuit.

The nominee, U.S. District Judge Justin Walker of Kentucky, is one of the youngest judges in the federal judiciary, at age 38, and earned a "not qualified" rating from the American Bar Association ahead of his confirmation as a district judge last October; the ABA cited his lack of trial experience.

Durbin slammed the Walker hearing in particular, suggesting on the Senate floor that the nominee was unqualified for the post and was being pushed through by McConnell as a political favor.

"It's certainly hard to argue that this is part of a response to a national health emergency in America. It has nothing to do with it," Durbin said. "When the majority leader comes to us and says, 'We have important nominations that deal with national security,' I'm sorry, but Judge Walker is not one of them."

"We know how to social distance; we know how to wash our hands, not touch our face. Those are the responsibilities each of us bear to one another not to spread this virus," said Sen. John Cornyn, R-Texas. "But make no mistake, self-government is essential under any construction, any definition of that word. Our system was not made to run on autopilot. So it's appropriate that we show up and we do our job."

Sen. Chuck Grassley, R-Iowa, 86, who gaveled the Senate into session Monday, did not wear a mask in the chamber, though he did in the hallways.

As she left after voting Monday, the Senate's oldest member, 86-year-old Sen. Dianne Feinstein, D-Calif., cut through a group of three senators chatting on the floor - touching Sen. Lindsey Graham, R-S.C., on the arm.

"See you in committee," Feinstein, the ranking member of the Senate Judiciary Committee, said to Graham, its chairman.

Sen. Roy Blunt, R-Mo., the No. 4 House GOP leader, was the only senator to leave an evening leadership meeting without a mask. Blunt is also chairman of the Senate Rules and Administration Committee, which oversees Capitol operations.

Meanwhile, the House appeared to sink further into a partisan split over how to restart its own physical operations, with Minority Leader Kevin McCarthy, R-Calif., dismissing some of the more ambitious proposals for remote work - including virtual committee meetings to advance legislation.

In a lengthy "Plan for the People's House," McCarthy said that the traditional nature of the House as a "physical meeting of people and ideas . . . should be dutifully guarded" and that technology should be deployed only sparingly. Access to virtual hearings, for instance, should be "reserved for members in at-risk categories or who are otherwise unable to travel to D.C."

"Before we rush to discard over 200 years of precedent, we should require that rigorous testing standards be met, ample feedback be provided, and bipartisan rules of the road be agreed upon and made public to truly safeguard minority rights," he wrote.

McCarthy also broke with Pelosi - as well as McConnell - in criticizing the two leaders' joint decision to reject the Trump administration's offer of special rapid-testing machines for use at the Capitol. The machines, built by Abbott Laboratories and offered by Health and Human Services Secretary Alex Azar, are similar to ones now in routine use at the White House, where Trump and those in close contact with him can obtain test results in less than an hour.

Pelosi and McConnell said in a joint statement Saturday that they would not accept special testing equipment so long as medical personnel and first responders did not have access to the same technology. The congressional attending physician is instead using more widely available tests whose results take two days or more, and that are being rationed for use on symptomatic patients only.

Most senators on Monday agreed with the decision. "I think, for now, we want to make sure the limited amount of tests that are out there get . . . to people who really need them," said Sen. John Thune, R-S.D.

But in a live-streamed Politico interview, McCarthy said the two leaders should have accepted the special equipment.

Trump also weighed in. "Interesting? By Congress not wanting the special 5 minute testing apparatus, they are saying that they are not 'essential,' " he wrote on Twitter, adding a defense of his administration's record on overall testing.

House Majority Leader Steny Hoyer, D-Md., meanwhile, gave no firm date for the House's return on a conference call with lawmakers Monday, according to three people on the call, but said committees would start assembling a vast new rescue bill early this week. He said lawmakers would be given sufficient notice to return to Washington to vote on that legislation.

The three people spoke on the condition of anonymity to talk frankly.

Tags:
Lawmaking in the time of coronavirus Senate