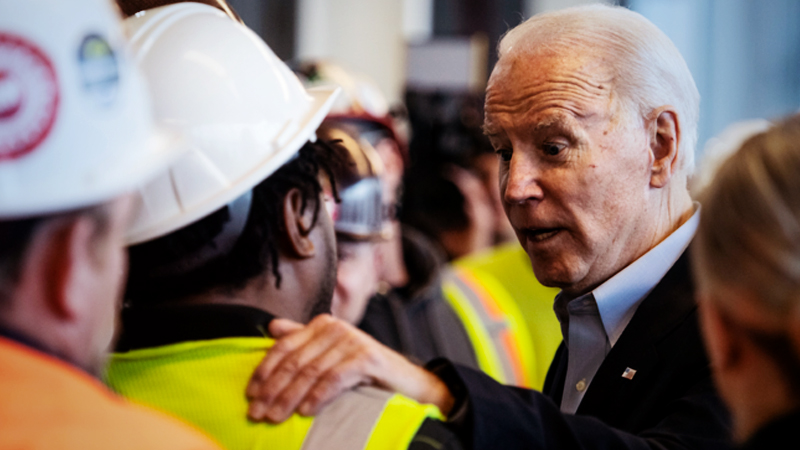 Presumptive Democratic presidential nominee Joe Biden on Monday highlighted plans to help African Americans and Latinos cope with the health and economic setbacks of the coronavirus, focusing on two communities that have been hit hard by the pandemic - and that constitute a crucial part of his party's electoral coalition.

During a live-streamed event hosted by a prominent Latino group, the former vice president urged greater protections for front-line workers at meatpacking plants, many of whom, he noted, are black or Latino. He also criticized President Donald Trump for anti-immigrant rhetoric at a moment when he said the country is relying on immigrants to do important jobs.

Later, Biden's campaign released what it called "The Biden plan for black America," a blueprint that in part highlighted the disproportionate impact of the crisis on African American families and advocated more expansive steps to ensure that their businesses get access to economic relief.

"Ask yourself this: What good is it going to do if we withhold access to needed treatment from the poorest members of our society, the most vulnerable, the undocumented?" Biden said during the online discussion hosted by the League of United Latin American Citizens, the country's oldest Hispanic civil rights group.

The efforts are part of a broader push by Democrats to draw a contrast between the ways Trump's policies are affecting nonwhite communities at a time of crisis and what Biden says he would do differently. In the fall, turnout among black and Hispanic voters could be pivotal in swing states such as Michigan, Wisconsin, Pennsylvania, North Carolina and Arizona.

Biden has close ties to the African American community, a relationship that was critical to his victory in the Democratic primary race, but he has struggled somewhat to solidify his support among Latino voters.

He made his pitch as he is trying to move beyond an allegation by a former Senate aide that he sexually assaulted her in 1993. Biden has vigorously denied the accusation by the former aide, Tara Reade, but it has attracted attention that threatens to eclipse his proposals and message.

The expected nominee has remained at his home in Delaware as the pandemic sweeps across the country, speaking in online events that often focus on the virus. Last week, he talked with a nurse who works in an intensive care unit. His campaign also enlisted Sen. Kamala Harris, D-Calif., to help highlight issues with Trump's response to the crisis.

Trump has faced criticism of his handling of the pandemic, and recent polls show Biden leading in crucial battlegrounds. Downballot, Democratic candidates have gained steam, causing some Republicans to worry that their Senate majority is at risk.

Biden has regularly zeroed in on the pandemic's impact on the most vulnerable people, including front-line workers and immigrants. On Monday, he proposed cost-free treatment for covid-19, the disease caused by the novel coronavirus - regardless of immigration or insurance status - and a $13-an-hour minimum pay hike for front-line workers.

"There's so much we can change," said Biden, who knocked Trump for what he called "malarkey" that casts immigrants as a problem. "We are strong because of that population," Biden said.

Trump and his supporters, despite the intense anger his response has caused among many Americans and the documented dysfunction within his administration, have regularly touted what they call his enormous success in tackling the pandemic, arguing that the White House response has been fast, effective and fair.

Biden faced criticism during the primary contest from some Latino activists who thought that he should have engaged more with Hispanic communities and that he had questions to answer about the Obama administration's deportation policies, seen by many on the left as harsh.

Biden's plan for African Americans said that government efforts to help with the economic effects of the crisis were a "good start" but that more needed to be done.

Among its proposals: providing black entrepreneurs help in finding funding, reserving half of the new funds under the Paycheck Protection Program for businesses with 50 employees or fewer, and creating a "weekly dashboard" to show which small businesses were accessing loans.

Biden's comments Monday also highlighted his larger attempt to differentiate himself from Trump in terms of empathy. On the campaign trail, the former vice president often brings up setbacks he has faced and engages in personal, sometimes emotional conversations with voters.

Trump favors a more hard-hitting approach, frequently appealing to his supporters by bashing his critics.

Immigrants, Biden said Monday, "should be treated with dignity and fairness." He said he had "a little idea what it's like waiting and worrying about your mother and father dying," having "gone though that in a different circumstance."

The crisis has presented Biden with chances to try to spotlight that contrast, while placing limits on his personal interactions with voters, which were a staple of his primary campaign. Gone are the rope line conversations and selfies, replaced with lives treams.