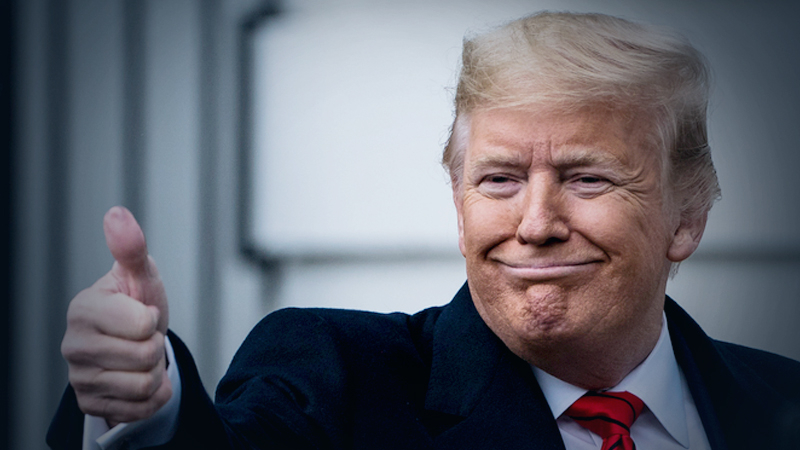 WASHINGTON - President Donald Trump's latest red line for the next phase of coronavirus legislation - a payroll tax cut for workers - has few fans in Congress even among Republicans, further complicating the path toward a new rescue package as House Democrats rush to release their own plan as early as next week.

As senators returned to Washington this week to an unusually sparse and eerie Capitol, resistance began to mount against Trump's favored form of putting more money into workers' pockets, with lawmakers noting that a payroll tax cut only helps those gainfully employed at a time when record numbers of Americans are filing for jobless claims.

The intraparty rift on a payroll tax cut comes as the Democratic-led House scrambles to produce additional coronavirus legislation with perhaps another massive price tag. Senate Republicans, meanwhile, made it clear that they will pause any rescue package as they begin to scrutinize the effectiveness of previous rounds of aid sent to states, hospitals, consumers and small businesses.

The bipartisan opposition to a payroll tax cut has not deterred Trump, who has continued to tweet about his idea even as growing opposition from his own party that came into sharper view on Tuesday.

"I'm not a particular fan of that," said Senate Majority Whip John Thune, R-S.D., the Senate's No. 2 Republican. He added: "I guess I'm open to being persuaded that it's something that could be effective, but I think some of the things that we are currently doing are having a bigger impact."

Other senior Republicans, some even allies of the president, were similarly lukewarm on the idea. Sen. John Barrasso, R-Wyo., said a payroll tax cut would not address all the economic issues currently crippling the nation and called Trump's proposal "kind of one arrow in the quiver."

"I've never thought that really would be effective," Sen. Susan Collins, R-Maine, a key swing voice, said Tuesday about the payroll tax cut. She instead said she is focused on working with Democrats and Republicans in both the Senate and the House on a on a state and local aid package.

Rather than indulging Trump's insistence on a payroll tax cut, GOP senators have shifted their focus to liability protections for businesses, demanding that they be protected from what Republicans call frivolous lawsuits as private employers try to reopen their doors in the coming weeks.

Top Democrats have said they will oppose such sweeping protections, which Republicans are insisting on in exchange for another massive infusion of state and local aid.

The standoff shows no immediate signs of abating as House Democrats assemble a massive new rescue package expected to exceed $2 trillion that would include about a $1 trillion commitment for states, cities and municipalities. Money is being eyed for a large array of other provisions including housing, social services, law enforcement, tribal government needs, food security, the Postal Service, rural broadband, rent and mortgage relief, as well as veterans issues.

Democrats have also discussed another round of checks to individual Americans and another extension of unemployment insurance, and are keeping an eye on the Paycheck Protection Program and a separate small-business emergency loan and grant program to see if supplemental funding will be needed.

The immensely popular Paycheck Protection Program was replenished with an additional $310 billion late last month. That second round of funding has so far helped support 2.2 million loans totaling $175 billion, according to administration and congressional officials.

Sen. Marco Rubio, R-Fla., who chairs the Small Business Committee, said this week that the program may need a third round of funding. His aides, who have been tracking how much of the small business money has been disbursed, said the new PPP money would probably not run dry this week but likely later this month.

A vote on a House Democratic bill could come as early as next week, Majority Leader Steny Hoyer, D-Md., said Tuesday, though there are divisions in the caucus between moderate Democrats growing spooked over a large price tag and liberals who want more spending. Some are also reluctant to vote on an enormous package that has no chance of becoming law and would like to see a bipartisan product like the previous four coronavirus bills Congress has passed, totaling nearly $3 trillion.

There are no active negotiations between House Speaker Nancy Pelosi, D-Calif., and the administration.

But the parties' diverging priorities threaten to make finding consensus much more difficult this time around as Democrats push for another massive funding commitment and Republicans promote the legal-liability protections for businesses they say would help the country reopen.

"If there's any red line, it's on litigation," Senate Majority Leader Mitch McConnell, R-Ky., told reporters Tuesday; had been asked about Trump's desire for a payroll tax cut.

"I think we looked at that early on and I think we just didn't think that would have the desired impact," Sen. Shelley Moore Capito, R-W.Va., said in a recent interview.

Senate Republicans noted during a closed-door meeting on Tuesday - held in a cavernous hearing room in the Hart Senate Office Building to allow for social distancing among dozens of senators - that significant portions of the rescue money that has already been signed into law have yet to be doled out, according to a person in attendance who spoke anonymously to discuss a private meeting.

White House legislative affairs director Eric Ueland also indicated no immediate urgency from the administration, telling reporters that with nearly $3 trillion in new spending approved, "we also need to understand exactly how successful that spending's been before committing to new spending ideas."

For his part, Senate Minority Leader Chuck Schumer, D-N.Y., urged McConnell to move with alacrity and continued to criticize the majority leader for his insistence that liability shields for businesses accompany any additional state and local aid.

"This idea of drawing red lines - particularly when they're not really related to what the needs of people are, particularly when they side with big corporate interests as opposed to individual workers, as Leader McConnell's red line - it's not productive and it's not going to work," Schumer said. "People have real needs."