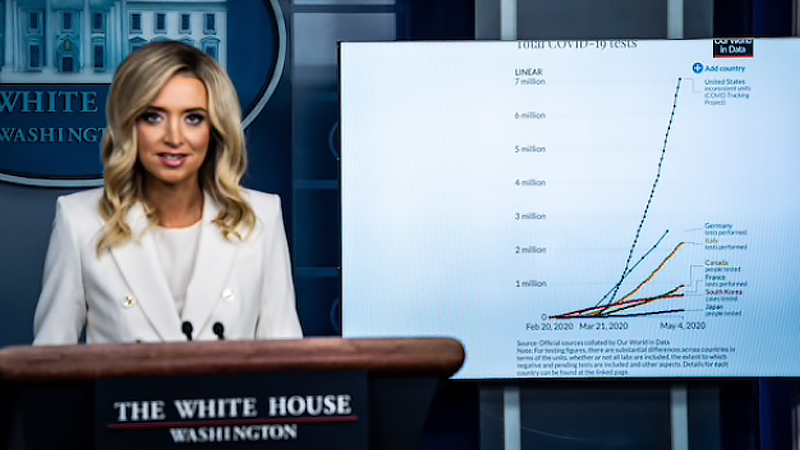 White House press secretary Kayleigh McEnany speaks during a briefing on Wednesday. The Trump adminisration declined to comment on the report that a new postmaster had been appointed. MUST CREDIT: Washington Post photo by Jabin Botsford

WASHINGTON - A top donor to President Donald Trump and the Republican National Committee will be named the new head of the Postal Service, putting a top ally of the president in charge of an agency where Trump has long pressed for major changes in how it handles its business.

The Postal Service's Board of Governors confirmed late Wednesday that Louis DeJoy, a North Carolina businessman who is currently in charge of fundraising for the Republican National Convention in Charlotte, North Carolina, will serve as the new postmaster general.

The action will install a stalwart Trump ally to lead the Postal Service, which he has railed against for years, and likely move him closer than ever before to forcing the service to renegotiate its terms with companies and its own union workforce. Trump's Treasury Department and the Postal Service are in the midst of a negotiation over a $10 billion line of credit approved as part of coronavirus legislation in March.

Trump has indicated that he wants the Postal Service to dramatically raise fees for delivering packages for customers such as Amazon in exchange for tapping the line of credit. Trump has long argued that Amazon doesn't pay the Postal Service enough, a charge the agency has fiercely contested. (Amazon's chief executive Jeff Bezos owns The Washington Post.)

"Louis DeJoy understands the critical public service role of the United States Postal Service, and the urgent need to strengthen it for future generations," said Robert Duncan, chair of the board of governors, in a statement.

"Postal workers are the heart and soul of this institution, and I will be honored to work alongside them and their unions," DeJoy, who will start June 15, said in a statement.

After criticizing the Postal Service for years, Trump has been consolidating his influence lately. Three Republicans and one Democrat sit on the board of governors after the vice chairman, David Williams, a Democrat, resigned last week.

The departure came after Williams told confidants he was upset that the Treasury Department was meddling in what has long been an apolitical agency and felt that his fellow board members had capitulated to Mnuchin's conditions for the $10 billion line of credit, according to four people familiar with Williams' thinking.

Democrats have urged the Postal Service to hold firm with the Treasury over the terms of the loan, betting they could win more money for the agency in another round of legislation and threatening the Trump administration with taking the risk of disrupting mail service.

But in recent days, the Postal Service's board of governors has appeared open to some of the Trump administration's terms, according to the four people. The precise terms could not be learned.

"[William's] main frustration is that he felt the Treasury Deptartment was interfering in an apolitical board and an apolitical agency," said one person who spoke with him.

DeJoy will be the first postmaster general in two decades who did not rise through the agency's ranks. He would have to navigate a financially fraught agency while also working with its powerful labor unions, among the last public sector unions left with significant clout in contract negotiations with the government.

In part because of the coronavirus pandemic, the Postal Service is projecting a $13 billion revenue shortfall by the end of the fiscal year in September.

Trump has for years seized on the rates Amazon charges companies like Amazon to deliver packages. The business of package delivery has proven increasingly vital to the service's finances as First Class mail has deteriorated, and Trump has alleged the agency charges Amazon and other companies too little.

The Postal Service has rejected those accusations, arguing it is charging competitive rates in an environment where it squares off against UPS, FedEx and even Amazon's growing delivery service.

Megan Brennan, the current postmaster general, who announced her retirement late last year, had clashed with the Trump administration over its efforts to take more control over postal finances and operations. Trump had urged her early in his tenure to increase fees for Amazon and other companies.

The announcement of Brennan's successor comes at a tumultuous period for the Postal Service, whose already shaky financial footing has grown weaker during the coronavirus pandemic.

Trump, responding to a report in The Washington Post in April, threatened to block the $10 billion Postal Service loan unless officials dramatically raised shipping prices on online retailers.

"The Postal Service is a joke," Trump said publicly last month in the Oval Office. He called for the agency to quadruple its shipping prices. Many analysts warn that if the Postal Service did that, it would put itself a massive disadvantage in the marketplace.

DeJoy, a North Carolina native, has played a prominent role in Republican politics, particularly since Trump won the presidency in 2016.

DeJoy was tapped as the finance chairman for the RNC convention in August and has worked in recent months with Katie Walsh, a top Republican operative, to orchestrate the event.

DeJoy's wife, Aldona Wos, serves as vice chairman of the president's Commission on White House fellowships and is Trump's nominee for Ambassador Canada. She previously served as ambassador to Estonia under the George W. Bush administration.

DeJoy has donated more than $157,000 to Republican candidates, committees and Superpacs since the start of the year, according to the Center for Responsive Politics

The current chairman of the Postal Board of Governors, Robert Duncan, served as RNC chairman from 2007 to 2009. He was confirmed in 2018 after being appointed by Trump.

DeJoy is the owner of a real estate and consulting firm in North Carolina, after serving as chairman and CEO of New Breed Logistics, according to his family's foundation page. New Breed was sold to XPO Logistics. He is a longtime donor to Republican causes, according to the FEC records.

Under the $2 trillion coronavirus stimulus relief passed in March, the Treasury was authorized to the loan the Postal Service, which says it may not be able to make payroll and continue mail service uninterrupted past September.

Mnuchin rejected a bipartisan Senate proposal to give the Postal Service a bailout amid the negotiations over that legislation.

Brennan, with the consent of the Board of Governors, went to Congress to ask for a direct bailout of more than $89 billion to stave off pandemic losses and other long-running accumulated debts.

Top Treasury officials were furious at the ask, according to a person with knowledge of their frustration.

The coronavirus has rapidly exacerbated years of revenue losses for the agency as it struggles to adapt to a digital age amid a decline in first class mail.

Postal officials have said that mail volume is down by a third during the pandemic and continuing to spiral down as businesses scale back solicitations and advertisements. Package volume is up, but not enough to cover the other losses, the officials say.