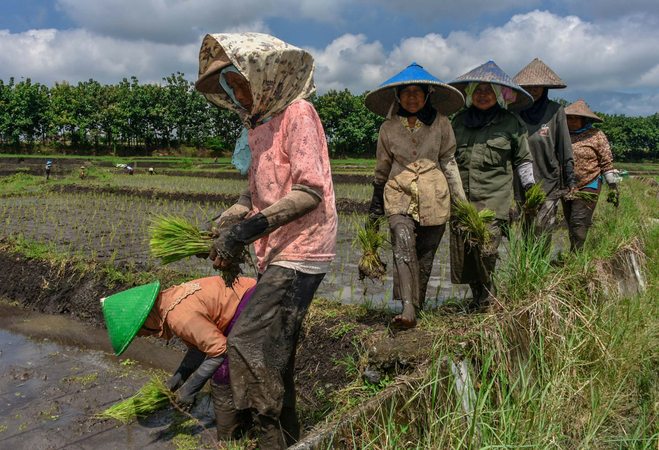 Farmers plant rice during the second planting season in 2020 amid the COVID-19 pandemic near the village of Tunggulwulung in Malang, East Java, on April 10. (JP/Aman Rochman)

Shortages in key commodities have been reported in most of Indonesia’s 34 provinces as the nation copes with the double whammy of the coronavirus outbreak causing supply chain disruption and a dry spell hurting harvests.

Garlic, sugar, chili and chicken eggs are in short supply in more than 20 provinces, while rice, a staple food for Indonesians, is in deficit in seven provinces across the archipelago, according to government data presented by President Joko “Jokowi” Widodo.

The data clash with the Agriculture Ministry’s claims that stockpiles, especially of Indonesia’s 11 key commodities, are “safe” and sufficient to meet nationwide demand during the annual peak consumption season of Ramadan, which began on April 24.

The Food Security Agency’s head of food availability and security, Andriko Noto Susanto, said Indonesia had recorded surpluses in the 11 key food commodities at the national level, and any shortages at the regional level were “a normal situation”.

“That is because there are provinces that serve as production centers, and there are those that do not,” Andriko told The Jakarta Post in a phone interview on Wednesday. “Provinces not producing rice may record a short supply of rice.”

The Home Ministry went as far as encouraging district heads to empower local communities across Indonesia’s regions to plant their own staple foods, especially those in territories facing shortage. The COVID-19 pandemic will disrupt food supply within the country and around the world, exacerbating the situation.

Making matters worse, a dry season is looming on the horizon and may impact the overall output of the agriculture sector, which employs more than a quarter of the national workforce.

The Meteorology, Climatology and Geophysics Agency (BMKG) has projected that more than 30 percent of the country’s regions, including parts of Bali, Java, Sumatra and Sulawesi, might face an unusually harsh dry season this month.

“So there are two challenges right now: climate change and supply chain disruption due to the outbreak,” Institute for Development of Economics and Finance (Indef) researcher Dhenny Yuartha told The Jakarta Post.

Of the 11 commodities, sugar, garlic and beef are the most at risk of short supply. The Food Security Agency has suggested speeding up the import of 207,743 tons of garlic, 85,474 tons of beef and 622,123 tons of sugar to ensure enough supplies for the April–June period.

Center for Indonesian Policy Studies (CIPS) researcher Galuh Octania said the government should pay utmost attention to food stocks beyond November, because some of the regions hit by the worse-than-normal dry season were staple food production centers.

President Jokowi has ordered his administration to store rainwater and start filling reservoirs, retention ponds and other artificial water storages to mitigate the impact. The government is also easing import processes to ensure sufficient food stocks, although the logistics of this are challenging as some producing countries have imposed lockdowns.

Coordinating Economic Minister Airlangga Hartarto reported Tuesday that 94,000 tons of garlic had arrived from China in April and estimated that 78,000 tons more would be shipped this month. As a result, the average price of garlic declined by 5 percent to Rp 42,650 per kg between March and April. However, it is still far higher than the government’s target of below Rp 30,000 per kg.

Soaring food prices also hurt farmers, since two out of three farmers in the country are classified as “net consumers” and some of them are poor, according to Galuh. Food accounts for more than 60 percent of the monthly expenses among poor citizens, those who spend around Rp 500,000 a month, according to a 2019 survey by Statistics Indonesia (BPS).

The government plans to provide Rp 300,000 in cash and production inputs like seeds and fertilizer valued at another Rp 300,000 per month to 2.7 million poor farmers. Eligible households can also get the Rp 200,000 monthly assistance to purchase food with the Staple Food Card program.

“Rising prices may lower farmers’ purchasing power,” Galuh told the Post via text message. “Amid the coronavirus outbreak, farmers must fear that either they cannot sell their produce due to logistical disruption or their products may spoil.”

The Agriculture Ministry is considering making available 600,000 hectares of peatland in Central Kalimantan to produce buffer stocks. The government has yet to work out the details, but a similar measure under former president Soeharto on 1 million ha of peatland in the province resulted in crop failure.

“If done in a hurry, the costly project to open a new field will lead to crop failure that hurt farmers and a greater risk of environmental damage,” CIPS researcher Felipa Ann Amanta was quoted as saying in a statement released on Tuesday.