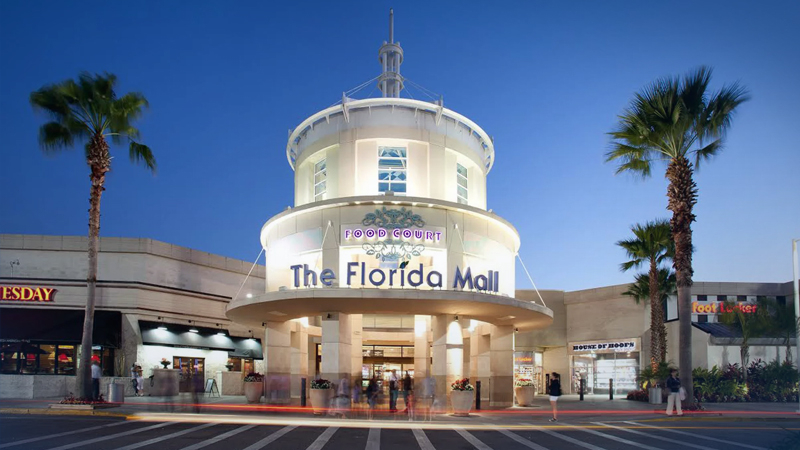 SARASOTA, Fla. - The debate over how quickly to reopen a pandemic-plagued nation played out on either side of a palm tree-dotted parking lot Wednesday morning.

On one end was a coronavirus testing facility at the University Town Center Mall, recently built to expand testing capacity in an area where covid-19 cases are steadily rising. Hundreds of cars lined up in advance of its 9 a.m. start time, tended by health workers in protective suits and Florida National Guard personnel clad in face masks and army fatigues.

But a few yards away, the 880,000-square-foot mall opened its doors to its first customers in more than a month. Patrons ambled about in air-conditioned comfort as songs by the Jonas Brothers and Colbie Caillat wafted over the speakers. Ubiquitous signs assured shoppers it was safe to peruse the aisles of Dillard's or snack on Auntie Anne's pretzels.

University Town Center is emblematic of retail outlets, restaurants, hair salons and other businesses around the country that have started to reopen, even though a deadly virus with no cure or vaccine is circulating widely. More than half of all states have eased some restrictions on businesses or movements put in place because of the coronavirus over the past two weeks. In many of these states, including Florida, the number of people confirmed to have the virus is increasing and testing continues to lag behind - falling short of the White House's recommendations on when a state should reopen.

Nationwide, coronavirus has killed more than 75,000 Americans. More than 1.2 million people have tested positive for the coronavirus.

Epidemiologists and disease modelers warn that social distancing is the only real weapon against the coronavirus, and that allowing people to stream into nonessential stores would nullify the hard work the country has done to flatten the curve of infections. But others - includingprotesters who have swarmed state capitals and been applauded by President Trump - have argued that shuttering society is doing more damage than the disease and that protective measures are asphyxiating the economy.

In the middle are wary Sarasota shoppers who are wading through conflicting advice, aware that a task as mundane as walking into a mall carries added risk - as evidenced by the military presence outside.

Wednesday was the first time Cynthia Wilkins had her husband, Hubert Skinner, both in their 80s, had ventured far from home in weeks. She insisted from behind a cloth mask that she wasn't making the trip for a mere shopping spree. A diamond fell out of her wedding ring and she needed to get it fixed.

"We don't want to dally or anything. We're not going to take our time. Just in and out," Wilkins said. "Normally, I could be in this mall for hours."

Joseph Powlis, 71, who escorted his wife to a mall store where she could pick up her favorite brand of makeup, said he felt it was safe because Sarasota's population is not as dense as his native New York, which has led the nation in coronavirus infections and deaths. Still, he said they were unnerved to pass a drive-through testing facility on their way into the mall.

"Look around, it's pretty much empty," he said. "From what I can tell, most of the stores are not open anyway. And it looks like they're doing a pretty good job of keeping it clean."

Florida Gov. Ron DeSantis, a Republican, last week announced that retail stores in most of the state could open at a reduced capacity and that testing would be expanded - including the one at University Town Center.

"This has been a real key component to us fighting the pandemic here in the state of Florida," DeSantis said while visiting the site in the mall's parking lot Tuesday. The facility closed after two hours because it ran out of tests.

More than 38,000 Floridians have tested positive for the coronavirus, and 1,600 have died.

As part of the first phase of reopening in Florida, retail stores and restaurants are open at 25 percent capacity inside, and outdoors with greater spacing between tables.

Personal-service businesses such as hair salons will not yet be allowed to reopen. Florida's major population centers are on a slower path; Miami-Dade, Broward and Palm Beach counties have higher rates of infection than the rest of the state.

Even though businesses are reopening, many Americans are wary of stepping foot in them. Sixty-seven percent of respondents in a Washington Post-Ipsos poll said they would be uncomfortable shopping at a retail store and 78 percent are wary of dining at a sit-down restaurant.

University Town Center mall was nowhere near capacity on Wednesday morning. Many stores posted signs that said they were closed despite the mall's new status. Some signs appeared to be more than a month old.

Stores with more than a few customers required people to stand in spaced lines outside. Cold Stone Creamery announced that it wasn't giving out free samples. Water fountains had been switched off, and a sign between baby stroller parking and a shoe cubby warned that the "play area is closed for play."

Still, individual mall walkers and family groups still browsed stores, some conceding they just wanted an opportunity to get outside the house.

Mornings are usually the busiest times for Bill Justice, 50, who operates a Zagg kiosk that fixes broken phones. People who cracked their screens the day before usually rush in for a quick repair job. But by noon on his first day back at work in weeks, Justice had not seen a single customer or busted phone.

He said he was not too worried about contracting the virus - and opted to not don a mask - but said the mall and the corporation that owns the kiosk could probably afford to wait a week or more to further flatten the curve.

"You're putting a lot of people at risk," he said. "And for what? I've been here for three hours and I've had nothing."

Louis Humphrey, 32, of Sarasota, said he felt the area was over the worst part of the pandemic and didn't feel worried enough to wear a mask or concerned about the testing facility a short distance from where he shopped.

His biggest problem was that the testing facility had only opened recently.

"I feel like everybody that's going to get it has pretty much gotten it. It's less of a risk now," he said. "There should have been [massive testing] maybe back in January."