People walk the Ocean City boardwalk, which has recently reopened, on a cold, blustery Saturday. MUST CREDIT: Washington Post photo by Jonathan Newton

MARYLAND-BOARDWALK: OCEAN CITY, Md. - Sariah Collick dashed into the Atlantic Ocean on Saturday morning - mask and all - until the cold surf and biting wind drove her right back to the beach.

But the little jig the 11-year-old girl did next to stay warm might as well have been a victory dance to celebrate the opening of the boardwalk here after a long government-ordered shutdown to slow the coronavirus pandemic. 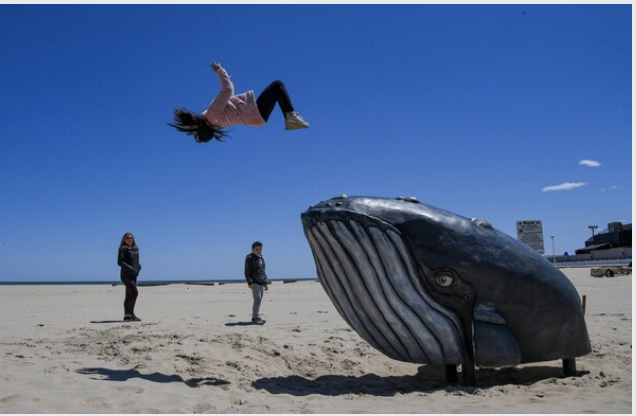 "It feels nice, but it's cold!" Sariah, a sixth-grader from Millsboro, Delaware, said. She had been spending most of her time playing video games since the virus restrictions began in late March until Leanna Bradshaw, a family friend, organized a quick trip to the seashore.

"I wanted to come out because it's been so long since I've seen the beach," said Bradshaw, 28, a lab technician who has been splitting her time mostly between work and hunkering down at home. Bradshaw said she wasn't expecting such cold weather, or so many vacant parking lots and a boardwalk that looked like a ghost town. 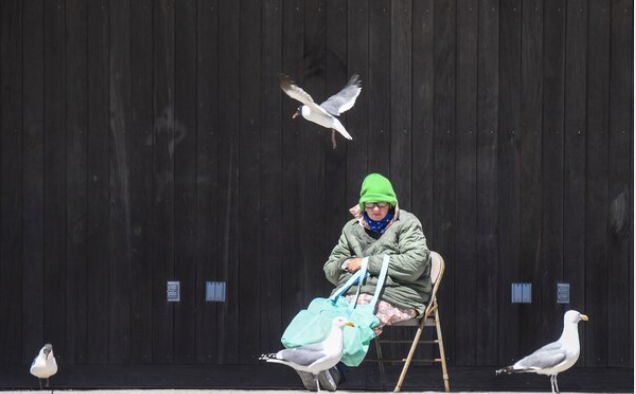 But like so many others who spent their day at the beach, she was in a celebratory mood about the normal sights of imminent summer, even if the new normal meant that people would be wearing masks and keeping their distance from each other while waiting to buy french fries.

"It feels really good to be here - to just see the beach, to see the waves," said Alesha Smith, 37, a pediatric clinic manager in York, Pennsylvania, who was jogging on the boardwalk for the first time since it closed.

Maryland Gov. Larry Hogan, a Republican, has been cautiously reopening the state to public activities that were banned or curtailed as the novel coronavirus spread. On Wednesday, Hogan announced that golf courses and beaches would be allowed to open, and many people were eager to take advantage of the moment, despite a polar vortex that brought clear skies and icy gusts of wind.

But the wind also brought the enticing aroma of summer's approach, of caramelized sugar, funnel cakes and greasy Philly cheesesteaks. People strolled the boardwalk past the gaping shark's mouth sticking out of a giant Ripley's Believe It Or Not billboard. They posed for selfies with the ocean as a backdrop. They scarfed down slices of pizza from the box. A masked boy rumbled by on a skateboard, followed a short time later by a gray-haired gent on a yellow bicycle who filmed the panorama with his smartphone as he pedaled by.

"Hello, Dolle's!" he called out as he rolled past the well-known boardwalk confectionery.

At Thrasher's, a long line of people bent around the corner from the walk-up window, where clerks in masks and rubber gloves shoveled out french fries by the basket.

"I wouldn't say the line looks like July Fourth, but it's pretty close," said Dean Langrall, a spokesman for Jolly Roger Amusement Park, whose properties include the flagship Thrasher's shack here. "Who doesn't want to come down and get some fresh air and saltwater?"

Brittany Santoni, who teaches kindergarten in Accomack County in Virginia during the school year and waits tables at the Bull on the Beach restaurant here during the summer, said she and her roommates were excited to get out, having had their fill of binge-watching TV shows and movies during the pandemic.

"At first, I was scared, but I'm kind of fine now," said Santoni, 27. The minute she and her roommates heard the boardwalk was reopening, they timed their trip to the opening of Thrasher's like a SWAT raid to beat the expected line. Also on their list: the Wrapper, a concession that slaps all manner of food inside a pretzel bun, and Fisher's Popcorn.

There was also a weirdness to it all, that people either didn't mind or didn't notice. The amusement park's Ferris wheel wasn't wheeling, and its bumper cars weren't bumping. The boardwalk shops that peddle flip-flops, boogie boards, goofy T-shirts and all manner of Margaritaville swag were still shuttered.

Robyn Smit, a retired teacher from Annapolis, Maryland, who is in the process of moving here, said there was even some local chatter on social media recently that raised the idea of setting up barricades to the city's entrances to bar outsiders who might be carrying the coronavirus - an odd reversal for people whose beach town economies generally thrive on tourists.

"They're especially infuriated with those who come down from New York and New Jersey," Smit said.

But others were hopeful that life could resume as normal and that people could go about their routines while also taking precautions against the virus.

"The more people follow the rules, the sooner we can get back to work," said Ashley Towson, 25, who would normally be waiting tables now. "It's just so weird to see it so empty."

Junk food stands and other businesses that were open had traffic cones or markings taped to the ground six feet apart to show where people should stand to practice social distancing.

At Fisher's, one clerk was designated to handle only cash payments, wearing protective gear and taking pains to sanitize hands after each transaction.

Owner Cindy Twilley, 69, was 12 when she started working in the popcorn stand her grandfather established in 1937. She said she wished Hogan had done more for the Eastern Shore by now, particularly in regard to setting up testing centers. But she was also glad to open again at the beginning of a beach season that looks more uncertain than ever.