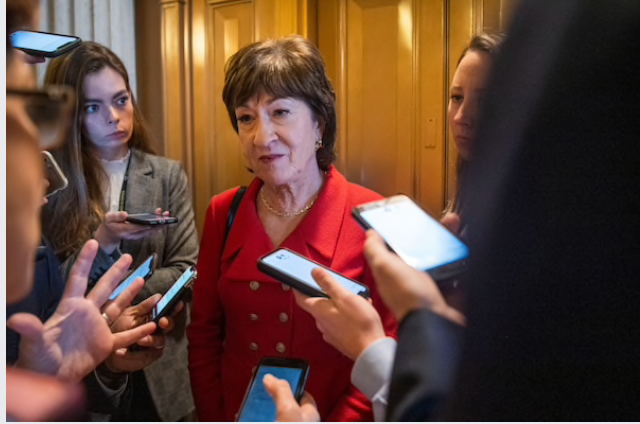 WASHINGTON - Republicans are increasingly nervous they could lose control of the Senate this fall as a potent combination of a cratering economy, President Donald Trump's controversial handling of the pandemic and rising enthusiasm among Democratic voters dims their electoral prospects.

In recent weeks, GOP senators have been forced into a difficult political dance as polling shifts in favor of Democrats: Tout their own response to the coronavirus outbreak without overtly distancing themselves from a president whose management of the crisis is under intense scrutiny but who still holds significant sway with Republican voters.

"It is a bleak picture right now all across the map, to be honest with you," said one Republican strategist closely involved in Senate races who spoke on the condition of anonymity to discuss concerns within the party. "This whole conversation is a referendum on Trump, and that is a bad place for Republicans to be. But it's also not a forever place."

Republicans have privately become alarmed at the situation in key races where they are counting on GOP incumbents such as Sen. Susan Collins of Maine and Thom Tillis of North Carolina to hold the line.

Multiple strategists said they believe GOP candidates will recover once the nation - and the presidential campaign - returns to a more normal footing, casting the November elections as a contest between Trump and presumed Democratic nominee Joe Biden. Democratic Senate candidates in the most closely watched races also could be benefiting from a lack of scrutiny and negative ads with the nation's attention consumed by the pandemic.

But a return to normalcy ahead of the elections is far from a given as the death toll continues to rise and economic data paints a grim picture, meaning the president's handling of the pandemic could be the determining factor not only for his reelection but for Republicans' ability to hold onto the Senate. In short, as goes Trump, so likely goes the Senate majority.

The emerging consensus of several Republican strategists is that GOP incumbents should be able to hang on in states Trump won in 2016 if the president can hang onto those states himself. That list includes North Carolina, Arizona and Iowa, which Democrats are heavily targeting this cycle.

The flip side for Republicans is that states Trump lost in 2016 - such as Colorado and Maine - could be out of reach. Many GOP strategists have already written off Sen. Cory Gardner, R-Colo., barring a major shift, and some have doubts that Collins will be able to continue her trend of faring far better in elections than Republican presidential candidates she has shared the ballot with.

Republicans currently hold a 53-to-47 seat advantage in the Senate.

"The political environment is not as favorable as it was a few months ago," said another Republican, one of a half dozen officials working on Senate races who spoke on the condition of anonymity to candidly assess the party's outlook.

Of the 35 Senate seats up for grabs this fall, Republicans are defending 23 of them. Strategists from both parties said the key battles for Republicans remain races in North Carolina, Arizona, Colorado, Maine and, to a lesser extent, Iowa. Republicans are banking on picking up at least one seat now held by a Democrat - Alabama, where Sen. Doug Jones won a special election in 2017 against a Republican challenger accused of sexual misconduct in the 1970s - but acknowledge they are playing defense in the vast majority of the marquee races.

Potentially competitive races looming in the second tier of Senate campaigns - where Republicans are also on the defensive - could pose an even bigger problem for the GOP if the party is forced to spread resources throughout the country in a difficult political environment.

Both Senate seats are on the ballot in Georgia, a state whose changing demographics are trending in favor of Democrats. In Kansas, Republicans fear that flawed GOP candidate Kris Kobach could again emerge victorious from a primary but lose a statewide race, as he did in the 2018 race for governor.

And Senate Democrats' ability to get popular Montana Gov. Steve Bullock to run against Republican Sen. Steve Daines revived a once-dead race into a closely-watched contest, particularly as Bullock benefits from the wave of political goodwill voters have afforded to state executives during the pandemic.

"It's a good time to be a governor," said Sen. Todd Youn, R-Ind., who heads Senate Republican's campaign committee, though he vowed Daines would win in November.

A third GOP strategist acknowledged that Colorado, Arizona, Maine and North Carolina had become "incredibly competitive" but said there was little sense yet that Democrats would be able to seriously compete in the next tranche of states that Trump won handily in 2016.

Still, Democrats have benefited from two key developments, said Jessica Taylor, Senate editor for the nonpartisan Cook Political Report: The emergence of Biden, not Bernie Sanders, as the presumptive Democratic presidential nominee and emerging evidence that the public does not believe Trump is managing the pandemic effectively.

The first quarter of 2020 was also a boon in fundraising for Democrats, with 10 challengers outraising GOP opponents in seats currently held by Republicans: Alaska, Arizona, Colorado, Georgia, Kansas, Kentucky, Maine, Montana, North Carolina and South Carolina. The only closely watched race where the Republican incumbent raised more cash than the Democrat was Sen. Joni Ernst in Iowa.

Republicans warned there are clear obstacles - none moreso than strong Democratic fundraising, and the fear that small-dollar Democratic donors will be more resilient in the economic downturn than high-dollar GOP donors.

Democrats also plan to attack GOP senators for their opposition to the increasingly popular Affordable Care Act, with 2020 marking the first Senate elections where Democrats can target a large swath of Republicans for votes early in the Trump presidency to repeal the health law.

"Democrats have expanded the Senate map and put Mitch McConnell's majority at risk with impressive challengers, record-breaking grass roots fundraising, and a focus on the issues that matter most to voters like defending coverage protections for pre-existing conditions," said Stewart Boss, a spokesman for the Democratic Senatorial Campaign Committee.

Republican senators are trying to assert the powers of incumbency - contending they are doing their jobs effectively for constituents during the pandemic - as they run public-service-announcement style campaigns.

During private calls with donors, through news coverage and in ads, Senate Republicans are touting the $2 trillion economic rescue package, known as the Cares Act, passed by Congress. It includes a popular small business lending program that has become a centerpiece of Republican efforts to show how they have responded to the virus outbreak and its devastating impact on the economy.

Senate Majority Leader Mitch McConnell, R-Ky., who is up for re-election in November, last week launched a statewide ad campaign that featured constituents who benefited from the Cares Act. One Nation, an affiliated nonprofit linked to the main super PAC dedicated to electing Republicans to the Senate, also ran ads last week showcasing Collins' efforts to secure personal protective equipment for her state. Gardner, who leads a Senate panel overseeing east Asia policy, highlighted that he secured 100,000 masks for Colorado from Taiwan.

"I think the one issue in this campaign - this particular election - is going to be how did we respond to this crisis? I think all other considerations are going to be secondary," said Sen. John Cornyn, R-Texas, who twice ran the Senate GOP's campaign arm and is on the ballot this fall. "If you're an incumbent, you can demonstrate how you would react to the crisis by actually doing it."

Non-officeholders in campaigns this year - including Biden - have struggled to break through the pandemic-saturated news cycle.

Yet GOP officials acknowledge it's difficult - if not nearly impossible - for senators to separate themselves from the president, noting the damage done to Republicans Kelly Ayotte of New Hampshire and Joseph Heck of Nevada when they tried to distance themselves from an embattled Trump during the 2016 campaign.

"It's not always ideal for him to be like, lavishing praise on you," said a fourth Republican strategist familiar with Senate races. "So it's a really tough dynamic."

In private, senior GOP officials have also expressed concern that senators weren't getting credit for the popular federal aid that has been doled out nationwide during the pandemic, as voters have tended to direct praise instead to their own governors.

National Republican Senatorial Committee executive director Kevin McLaughlin stressed to donors on a recent conference call that GOP senators had to "subtly and respectfully" remind voters of the Senate's accomplishments.

"About 90 percent of Americans have favorable view toward the Cares Act, and each of our senators played an important role in getting that passed," Young said.

He added: "Then you consider the number of individuals our senators have been able to connect with virtually over this time, at a time when they most want to hear from and or see their United States senator, you know, this could be quite beneficial toward our incumbents."

Already national Republicans have mapped out a strategy to redirect anger about the coronavirus crisis away from the Trump administration and toward the communist regime in China.

In a private, 57-page strategy memo distributed to candidates by the NRSC and leaked last month, a Washington-area Republican strategist advised GOP candidates to avoid defending the president and instead pivot to attacking China for the coronavirus.

The NRSC said the memo was simply part of a routine distribution of material to candidates. But GOP strategists said efforts to target China will continue throughout the campaign.

"I would expect Republican candidates to forcefully define China's role in causing the chaos here that we now have in the United States and also highlight how some Democrats have a little too cozy relationship with China and seem reluctant to criticize the communist government for how they allowed this problem to fester," said a GOP official familiar with party strategy.

But Republicans also believe the sinking economy - which on Friday reported a 14.7 percent jobless rate for April - will help determine the fate of incumbent GOP senators come November. Several Senate Republicans have already stressed the need to carefully reopen businesses and other economic activity - warning of the long-term impact to the country if the lockdown continues indefinitely.

"Everyone's fortunes are tied to the economy," said a particularly pessimistic Republican official. "It's going to be a tsunami."