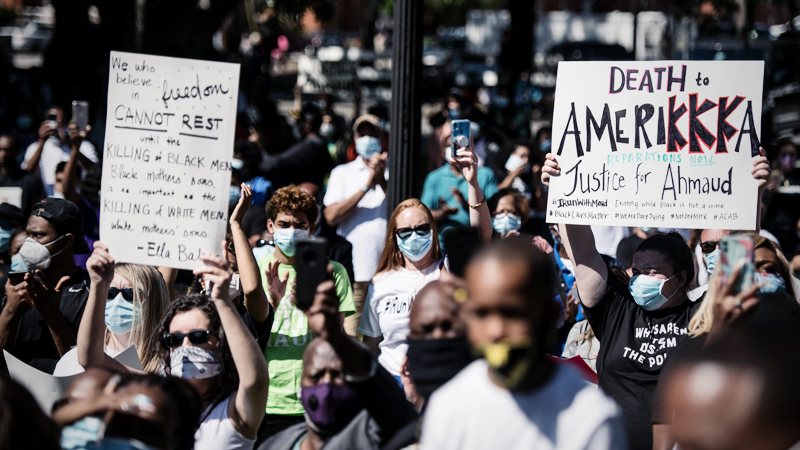 BRUNSWICK, Ga. - Additional video emerged Saturday that is believed to show the moments leading up to the death of black jogger Ahmaud Arbery, whose fatal shooting sparked widespread outrage and demands for action against local law enforcement officials who waited more than two months to arrest suspects in the killing.

The Georgia Bureau of Investigation arrested retired police detective Gregory McMichael and his son, Travis, Thursday night on charges of murder and aggravated assault. The elder McMichael told officers following Arbery's death that there had been burglaries in the neighborhood, and when he saw Arbery jogging down a residential road on Feb. 23, he believed he resembled the culprit.

The Atlanta Journal Constitution published surveillance footage Saturday that shows a figure entering a house under construction that day shortly before the shooting, lingering for a few minutes and then jogging toward the location where the men later confronted Arbery. The Georgia Bureau of Investigation confirmed the video is part of its investigation, but did not identify the figure.

Lee Merritt, an attorney for Arbery's family, tweeted a statement Saturday noting that the figure in the video is believed to be Arbery.

"He engaged in no illegal activity and remained for only a brief period," Merritt's statement read. "Ahmaud did not take anything from the construction site. He did not cause any damage to the property."

The video shows Arbery's "murder was not justified and the actions of the men who ambushed him were unjustified," Merritt's statement read.

Last week, a graphic video of the final moments of 25-year-old Arbery's life went viral, showing him jogging on a suburban road in February when two armed white men approach in a pickup truck. The younger men tussle, gunshots boom and Arbery staggers, then collapses.

The case passed through two prosecutors, who recused themselves because of previous work connections with McMichael, and is now being handled by the Georgia Bureau of Investigation and District Attorney Tom Durden of the neighboring Atlantic Judicial Circuit. The state attorney general has pledged to investigate local officials' handling of the young black man's killing.

Critics, including Glynn County commissioners calling for a federal probe, say the two prosecutors who publicly recused themselves also privately told police to delay or refrain from arresting the McMichaels. Gregory McMichael had been an investigator for the county's district attorney's office and, before that, a county police officer. Those connections sparked cries that the criminal justice community was looking out for one of its own.

Durden, the third district attorney assigned to the case, said he would present it to a grand jury, but changed course after the video leaked outside of law enforcement circles and public outrage intensified. Within 36 hours of the leak, the Georgia Bureau of Investigation had been assigned the case, and the McMichaels were in jail.

Georgia Attorney General Chris Carr said he would look into how the investigation into Arbery's killing "was handled from the outset. The family, the community and the state of Georgia deserve answers. We need to know exactly what happened, and we will be working tirelessly with the Georgia Bureau of Investigation, the Brunswick community and others to find those answers."

"When the highest levels of our federal government are criticizing what's happening here, I think that speaks to the needs of not just a look at Arbery's killing, but at the entire system that investigated it," Murphy told The Washington Post.

According to a news release from Glynn County on Saturday, police investigators sought the advice of District Attorney Jackie Johnson's office shortly after Arbery was killed - a common practice in homicides or legally thorny cases. According to the statement, officials in the prosecutor's office told investigators that "the McMichaels were deemed not to be flight risks and officers were advised by the DA's office that no arrests were necessary at the time."

Johnson recused herself two days later. George Barnhill Sr., a prosecutor from nearby Waycross, was given the case, but told investigators the killing was a justifiable homicide.

Johnson did not return calls and emails seeking comment, and Barnhill has declined to comment on an open investigation.

In a statement cited by a local news station, Johnson's office said assistant district attorneys contacted by Glynn County investigators after the killing "immediately cited a conflict of interest and stated our office could not be involved."

Barnhill also recused himself after being pressured by Arbery's mother, who raised concerns that the prosecutor's son used to work with Gregory McMichael in the Brunswick District Attorney's Office, according to a letter Barnhill wrote to the Glynn County Police Department.

As he removed himself from the investigation, Barnhill took the unusual step of telling law enforcement he did not see grounds for the arrests of the McMichaels, arguing their actions were lawful because they were making a citizen's arrest of a person they believed to be involved in a burglary.

"It appears their intent was to stop and hold this criminal suspect until law enforcement arrived," Barnhill wrote. "Under Georgia Law this is perfectly legal."

But several legal experts told The Post that Barnhill's application of the state's citizen's arrest law is flawed, because the statute requires that the offense be committed in the person's presence or under reasonable grounds of suspicion if the crime is a felony.

As part of the continuing probe into Arbery's death, the GBI announced it is also looking into Willian "Roddie" Bryan, the man who recorded Arbery's fatal shooting. Bryan's attorney, Kevin Gough, released a statement Friday that his client had done nothing wrong and had fully cooperated with law enforcement.

But according to the police report, Greg McMichael told officers that "'Roddy' (as it was spelled in the report) attempted to block" Arbery as the men pursued him, but "was unsuccessful."

Gough said calls for Bryan's arrest have "effectively destroyed his life." He lost his job and he and his family are receiving death threats. Bryan is "a family man, NASCAR fan, and enjoys rock and roll. He is not now, and never has been, a 'vigilante'," Gough said in the statement.

Gough, a former Brunswick Judicial Circuit public defender, was fired in 2016 by the Georgia Public Defender Council's over allegations that he insufficiently represented his clients, according to local reports. He claimed he was targeted because he called out Johnson for delaying cases while his clients sat in jail.

In Brunswick and neighboring communities, there were widespread calls for the prosecutors involved to resign or be recalled. Fer-Rell Malone Sr., the pastor of Macedonia Baptist Church in Waycross, led several dozen protesters through city streets on Saturday to call attention to an effort to recall Barnhill in connection with the Arbery shooting investigation.

In another part of the county Saturday, Arbery's family, a motorcycle club and hundreds of Brunswick residents gathered in the shadow of the Sidney Lanier Bridge to commemorate what would have been Arbery's 26th birthday - and to mourn his death.

A local pastor prayed for justice in Arbery's killing - both heavenly and earthly - and lauded Arbery's mother, who persisted even after she was told that her son was killed in a burglary gone wrong.

She wept as friends talked about her son's shortened life, and the people across the world who are outraged at how he died.

"I know you looking down right now, man, and smiling at all the love you're getting from all over the world," one friend said, wiping away his tears.