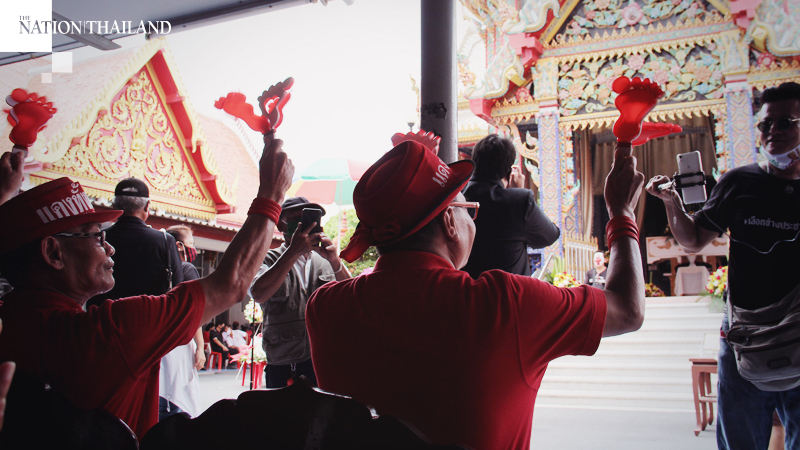 A large crowd of mourners, many dressed in red, paid tribute to Daranee Charnchoengsilpakul on Sunday (May 10) as the pro-democracy fighter better known as Da Torpedo was laid to rest in Bangkok.

Daranee, who was among the earliest and most prominent protesters against the 2006 coup, died of cancer aged 62 on May 7.

Her funeral marked the first large pro-democracy gathering during lockdown. Many mourners dressed in red instead of black to demonstrate their determination to carry forward Da Torpedo’s fight for democracy.

Daranee was a journalist at Phim Thai newspaper and Sky TV before becoming a political activist after a military coup brought down the government of PM Thaksin Shinawatra in 2006.

She was jailed for eight years after being found guilty of lese majesty over a political speech she gave during a protest against the coup. She was finally pardoned and released in 2016.

In jail, she developed cancer that eventually killed her, her family said.

Her funeral was held at Wat Thevasunthorn in Chatuchak district.

Tida Thawornset, a former leader of the red-shirt movement, led the tributes at the cremation ceremony, hailing Daranee for the battle she waged to achieve democratic rights for Thai people.

Tida said Daranee had been the victim of an unfair legal system, adding that people who believed in democracy had to stand up for it, just as “Da” did.

As the crowd of mourners swelled beyond expectations, the funeral’s hosts had to ask for cooperation in obeying social distancing rules.