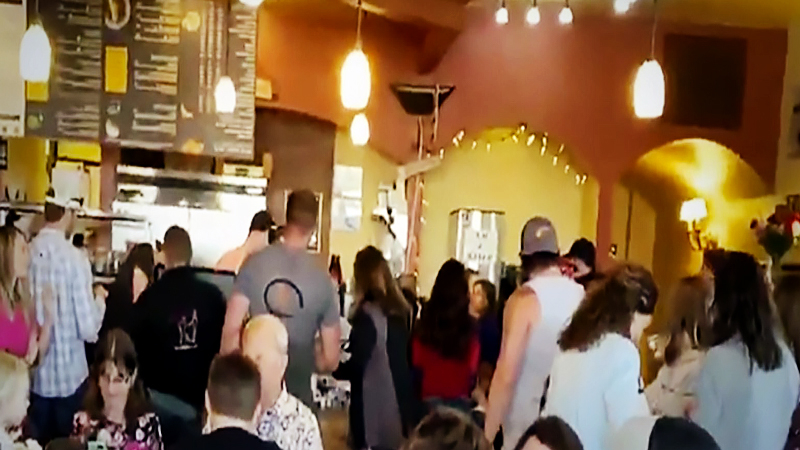 CASTLE ROCK, Colo. - A day after C&C Coffee and Kitchen defied Democratic Gov. Jared Polis's executive Safer at Home order - packing the restaurant with hundreds of customers on Mother's Day - the regional health department ordered the business to shut down immediately until authorities could determine if the business was in compliance with coronavirus-related restrictions, according to a statement from the agency.

Nearly every table was full after the restaurant opened its doors on Sunday morning, according to footage from Colorado Community Media reporter Nick Puckett. Customers crowded around the counter waiting for their orders. The line to place them went out the door, wrapping around the side of the building. Almost no one was wearing a face mask.

For the owners of the breakfast cafe, it was a way to both celebrate Mother's Day and to openly push back against policies they believe are strangling the American economy; the decision was met with enthusiasm in the wealthy enclave south of Denver, as customers flocked.

"We are standing for America, small businesses, the Constitution and against the overreach of our governor in Colorado!!" C&C Coffee & Kitchen wrote on its Twitter account, tagging President Trump.

Open defiance of government orders has become a political rallying point for small businesses from coast to coast as the nation's shutdown nears two months. More than 20.5 million Americans lost their jobs in April and the unemployment rate has soared to nearly 15%, an economic catastrophe for some that has them questioning the logic of shutting down to prevent the spread of the virus - which has now killed about 80,000 Americans and has infected more than 1.3 million.

Some business owners have reopened even after being threatened with legal consequences, though some have chosen to keep social distancing restrictions in place. Dallas hair salon owner Shelley Luther, for example, was sentenced to seven days in jail for defying a court order to shut down, although salon employees were still wearing masks and taking customers' temperatures. She was freed by the Texas Supreme Court two days after sentencing.

On Monday, Karl Manke, 77, kept the doors to his barber shop in Owosso, Michigan, open in defiance of state orders, despite receiving two citations last week. Since he has reopened, customers have arrived from as far away as New York and California to get their hair cut and to back his fight to keep working.

Customers were spaced a seat apart in the small barber shop. Others arrived to demonstrate, waving yellow "Don't tread on me" and Trump flags. A few members of the Michigan Home Guard, a local militia, stood sentinel outside the shop with loaded weapons and planned to barricade the door and prevent Manke's arrest if police arrived. Passing cars and trucks blared their horns in support.

Pennsylvania Gov. Tom Wolf, a Democrat, is fending off widespread dissent after gradually allowing businesses to reopen in the western part of the state but ordering most commerce to remain closed in the more populous east until June 4. In York County, which includes the northern exurbs of Baltimore, the owners of the Round the Clock Diner decided to reopen on Monday, despite the stay-home order, according to staff members and local media reports.

The decision to reopen followed an announcement Friday by the York County district attorney that he would not prosecute business owners who defied Wolf's order. David Sunday, a Republican, also urged law enforcement agencies to no longer cite business owners who violate the governor's order, saying the definition for an essential business is too murky.

"Rapid changes in the definition of what constitutes criminal conduct renders the application of criminal law as arbitrary and impossible to follow or defend against," Sunday wrote in his order. "In analyzing the ever-changing scope and application of these orders, we find that their enforcement as criminal penalties is not possible on the consistent basis required of prosecutors and law enforcement."

In a fiery speech on Monday morning, Wolf responded by portraying his detractors as traitors who were choosing to desert their posts "in the face of the enemy in the middle of a war, that we Pennsylvanians are winning and that we must win." He added that it is "cowardly" for local politicians to try to sidestep his authority.

On Monday morning at 8 a.m., dozens made the pilgrimage to Castle Rock from cities throughout Colorado to purchase $10 burritos and support a business operating in line with their gripes over the handling of the coronavirus outbreak here, one of the first states with a Democratic governor to allow counties to make the decision about reopening nonessential businesses.

Suzanne Andrews, 68, a retired member of the National Guard, said she made the hour-long drive from Aurora, a suburb of Denver, to Castle Rock "to support the family and the business and to get the governor to realize that we need to open up," she said. "I figure if I could spent 30 days in Germany in -40 degree weather, God's not ready to take me. I'm as healthy as I ever would be."

Customers who were among the first to patronize the restaurant Monday morning shared a skepticism of nationally reported test data and fatality statistics, doubts about the virus's lethality, and resentment for what they described as "unconstitutional" state health orders requiring businesses like C & C to limit their offerings to carryout and curbside service.

"I'm a historian. I know history," said Andy Stone, 56, president of an MRI company in Centennial, Colorado. "What's happening is like Nazi Germany. It's a totalitarian environment where the government is going to establish their power and through fear enable the rest of the society to help them stay in power. . . . They just keep moving the target, and people just can't survive that. We can't save every single life."

The restaurant's reopening on Mother's Day, with apparently no social distancing precautions, is the latest example of small businesses bucking their states' executive orders while fearing for their survival. Under Polis' "Safer at Home" order, restaurants are still prohibited from offering dine-in service. Colorado has seen more than 19,700 cases of covid-19, along with 973 deaths.

The move to open Sunday drew swift backlash, as state and local officials condemned the restaurant's disregard for public health protections and some Castle Rock residents feared the restaurant could have worsened covid-19 in the community. A spokeswoman for the governor's office said in a statement that the restaurant's conduct is "endangering the lives of their staff, customers and community." The Tri-County Health Department issued it's order to shut down the restaurant after the business continued to host customers Monday, with several opting to dine in.

"It is disheartening that this restaurant has chosen to move ahead of the public orders and not even consider implementing best practices to prevent the spread of COVID-19," said John Douglas, executive director of the local health department. "It is not fair to the rest of the community and other business owners that are following Safer at Home and doing their part. We sincerely hope that C & C will choose to cooperate with the rules under which they are allowed to operate so we can lift this closure order."

The Korean-fusion breakfast cafe's owners, April and Jesse Arellano, declined requests for an interview. But April Arellano told Puckett that she had never seen a Mother's Day crowd at the restaurant like the one on Sunday in their seven years of operation. She told KDVR the restaurant had about 500 customers.

"I expected it to be busy. I never expected this," she told Colorado Community Media. "I'm so happy so many people came out to support the Constitution and stand up for what is right. We did our time. We did our two weeks. We did more than two weeks . . . and we were failing. We had to do something."

Few customers inside the restaurant appeared concerned about the lack of social distancing. In a since-removed Facebook Live video archived by CBS Denver, a maskless Arellano scans the noisy, crowded space, thanking everyone who came and saying, "So much for some of those people who said nobody would show up. And our patio is full."

A sign on the door reportedly read: "ATTENTION: Our freedom doesn't end where your fear begins. . . . If you are afraid to be within 6 feet of another person, do not enter this business!"

Others within the restaurant industry said they understood the restaurant's frustrations but completely disagreed with the owners' decision.

"It pisses me off," said Chris Fuselier, owner of the Blake Street Tavern in Denver. "They have put Castle Rock on the global pandemic map. They should have been shut down on Monday morning. You bolt the doors and you send a message to the thousands of other restaurants in Colorado who are abiding by the order and doing the right thing. I'm struggling too. My bank account is on fumes. But we need to do this right. We've got a couple more weeks and our time is coming."

Another man who went to the restaurant to pick up takeout told the Denver Post he was so taken aback by the lack of social distancing and the fact that no one was wearing face masks that he decided he didn't want his food anymore.

"It was unbelievable," the customer, Nick Whitehill, told the newspaper, adding he filed a complaint with the county health department.

The Yelp review page for C & C Coffee and Kitchen highlighted some of that disapproval Sunday, as dozens of people - some of whom were clearly not from Castle Rock - flooded the restaurant with complaints.

But the restaurant also had plenty of supporters. Among them was state Rep. Patrick Neville, a Republican who also is among a number of conservative lawmakers nationwide who have joined their constituents in acts of defiance. He said on Facebook that he found it "shocking" that, after taking a photograph of himself with Arellano at the restaurant on Sunday, the "left mob is coming after me over this hardcore."

In a text message to The Washington Post, Neville said he went to the restaurant on Sunday to return the kindness the owners showed his family a couple of years ago, when his wife was hit by a car in a nonfatal accident outside the restaurant and they brought out hot cocoa to Neville's daughters.

"They made a lasting impression on my family and we wanted to show our support as they are providing for their families," Neville said.