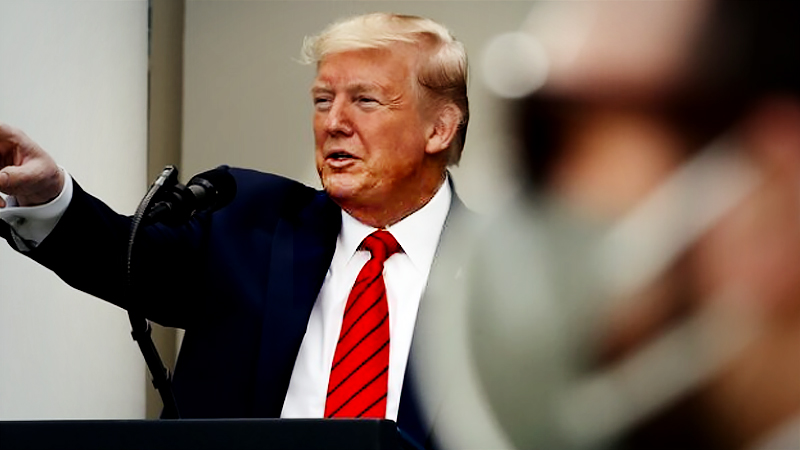 WASHINGTON - Amid criticism that the United States has not done enough to test its population for coronavirus infections as cases have soared, President Donald Trump claimed Monday that his administration is besting the world in testing and that it will help states expand such efforts, which are a key element of lifting the safety restrictions that have shuttered much of the economy since March.

The administration said it will distribute $11 billion to states to facilitate testing - from money already approved by Congress for coronavirus relief - as Trump claimed, "We have met the moment and we have prevailed." He said the United States should pass 10 million completed tests this week, "nearly double the number of any other country."

Officials outlined the plan in front of huge banners that proclaimed "America leads the world in testing." Trump said that with the federal help, each state would be able to test more people per capita in May than South Korea has tested in four months. South Korea is often held up as a model for how to deploy tests and use the results to slow the spread of the deadly virus.

But the White House event Monday afternoon amounted to an acknowledgment that there is not yet enough testing capacity across the United States, even as more than 40 states are in some stage of lifting restrictions on travel, work and school. The president's claims about U.S. testing benchmarks do not account for what health experts have criticized as the slow pace of testing capability in the United States this spring, a delay that some attribute to the rapid spread of the virus, the mounting death toll and uncertainty about the way forward.

"Testing is absolutely critical and is the only way to get back to work in any safer form," said Eileen O'Connor, a spokeswoman for the Rockefeller Foundation, which has been working with companies and government leaders on increasing testing. "Unless you have the data, you don't know where the disease is going."

Administration officials said that states were asked to detail their needs and capacities and that the $11 billion in aid would be distributed to meet those needs. A map displayed in the Rose Garden suggested that two hard-hit states - New York and New Jersey - would each get the highest level of spending, or $500 million. Other states with significant levels of infection, including Michigan, Florida, Illinois and California, are slated to get between $300 million and $500 million each.

The United States as of Sunday had completed nearly 9 million coronavirus tests, according to the Covid Tracking Project. While an enormous number, the amount is equivalent to 2.74% of the U.S. population and does not give a full representation of the virus's reach within American society.

There are far higher levels of per-capita testing in other parts of the world. In tiny Iceland, the figure is a 15.4%, but that amounts to about 54,000 tests across a population of 352,000 people.

Yet major industrialized economies with large outbreaks also have fared better in testing than the United States: Italy has conducted tests equivalent to 4.31% of its population, and Germany is at 3.35%. The United States also is still behind its northern neighbor, Canada, where its 1.09 million tests are now equivalent to 2.95% of the county's population.

While Trump moves to increase testing, the United States continues to be, by far, the world's coronavirus hot spot. There are 1.34 million confirmed cases, more than the sum of cases in the next six countries - Spain, the United Kingdom, Russia, Italy, France and Germany. U.S. deaths passed 80,000 on Monday.

Trump had asserted earlier Monday that "coronavirus numbers" are decreasing in almost all of country - a statement that oversimplifies the trends in daily case and death totals.

Though the rate of new daily infections in the United States has declined from its peak in mid-April, the daily case totals in several states are still rising. Among them: Minnesota, Nebraska, South Dakota, Kansas and Maryland.

And while there has been a significant slowing of new cases in New York - the state hit hardest by the virus - other states have increased their share, keeping the daily totals of new cases nationwide in a slow decline. There were 20,741 new cases reported in the country on March 30, about 7,000 of which were in New York. On Sunday, 21,171 new cases were tallied, and 2,273 were in New York.

The administration action on testing came a day before a Senate panel was due to review the federal government's pandemic response. Federal health experts are scheduled to testify at the hearing remotely, partly because of exposure to people who had tested positive.

Data from the Covid Tracking Project details how the country has slowly increased its daily testing over time. Since the beginning of May, the United States has reported more than 250,000 tests on most days. On Monday, the country reached a record of nearly 395,000 reported tests.

Those figures still remain far below the volume that many public health experts say will be essential before schools and businesses can reopen and before Americans can safely gather, go to work and travel again.

Late last week, public health researchers at Harvard University's Global Health Institute published new estimates arguing that the United States needs to be conducting at least 900,000 tests daily by May 15 to have a better grasp of the outbreak. Other researchers have predicted that the nation would need to conduct as many as several million tests a day to handle the virus's spread.

The Harvard findings said fewer than a dozen states are testing enough to keep ahead of the virus. Most others, researchers wrote, are not testing at a level that will allow them to adequately track people who get sick and others they might have come into contact with.

New York Gov. Andrew Cuomo, a Democrat, reiterated Monday how expanded testing would be one of the key metrics the state uses as it considers how quickly to reopen schools and businesses and return to normal life.

Cuomo detailed thresholds that officials monitor constantly, including hospital capacity and beds available in intensive care units, before moving forward. The list included testing 30 residents per 1,000 - or 3% - of the state's population monthly, as well as maintaining a certain amount of contact tracers at all times.

"You don't know what the virus is doing unless you are testing," Cuomo said, adding that New York has done more overall testing than any other state.

Former vice president Joe Biden, in an opinion article published Monday in The Washington Post, accused Trump of embracing a "childish tactic" of seeking to divide the country to benefit politically from the coronavirus crisis.

In his op-ed, the expected Democratic presidential nominee also criticized Trump for not making testing more widely available to the general public while the president and his staff receive daily tests.

"If Trump and his team understand how critical testing is to their safety - and they seem to, given their own behavior - why are they insisting that it's unnecessary for the American people?" Biden asked.

There is now intense focus on what is being done to contain the virus in the West Wing, where staffers were told Monday to begin wearing masks or face coverings on the job. The directive does not apply to Trump, who did not wear one while addressing reporters Monday.

Fears are mounting of a coronavirus outbreak in the White House, with two confirmed infections within the president's orbit and what several officials have said are mixed messages on precautionary measures. One of Trump's personal valets and Katie Miller, the spokeswoman for Vice President Mike Pence, tested positive last week.

While some top officials leading the government's coronavirus response have begun two weeks of self-quarantine because of possible exposure, others, including Pence, say they plan to continue coming to work.

According to a Monmouth University poll released Monday, fewer Americans are concerned than a month ago about someone in their family becoming seriously ill from the coronavirus.

The poll finds that 42% of Americans are very concerned about someone in their family becoming seriously ill, down from 50% last month. An additional 28% are somewhat concerned, down from 33% last month.

In the latest polling, 30% are not too concerned or not at all concerned, up from 16% a month ago.

A Washington Post-University of Maryland poll released last week showed a more steady rate of concern. In that poll, 63% of Americans said they were very or somewhat worried that they would get seriously ill, while 36% said they were not too worried or not at all worried.

The percentage of Americans who say they have avoided small gatherings dropped some during the past month - but significantly more among Republicans than Democrats, according to Gallup survey results released Monday.

The new survey found that 86% of Democrats say they have avoided small gatherings, a modest drop since a high of 90% in late March.

Sixty percent of Republicans in the new survey say they have avoided small gatherings, a drop from a high of 76% in late March.

The current 26-point gap between Democrats and Republicans is the largest it has been since Gallup started asking the question in mid-March.

In China, new coronavirus cases have been reported - including in the original epicenter, Wuhan - despite strict controls on entry into and movement around the country.

The city of Shulan in Jilin province, near the Russian border, has declared that it is in "wartime mode" after linking 15 new cases to a super-spreader. All public places have been closed and all public transport suspended, with residents told to stay home while the outbreak is contained.

Two weeks after Spanish children were allowed to venture outdoors in a first step to ease the nationwide lockdown in effect since March 15, Spain's Health Ministry said Monday that the outings have not provoked a significant change in the spread of the virus.

With another record one-day increase in confirmed cases, Russia has now overtaken Italy and the United Kingdom for the third-most coronavirus infections in the world.

Russia announced 11,600 new cases Monday, putting the country's total at more than 221,000. The number of new cases per day has continued to rise despite six weeks of strict stay-home orders that prohibit even outdoor exercise.

Officials attributed the surge in cases to more testing - Russia's consumer health watchdog said more than 5 million tests have been conducted - and nearly half of the new diagnoses are considered asymptomatic.