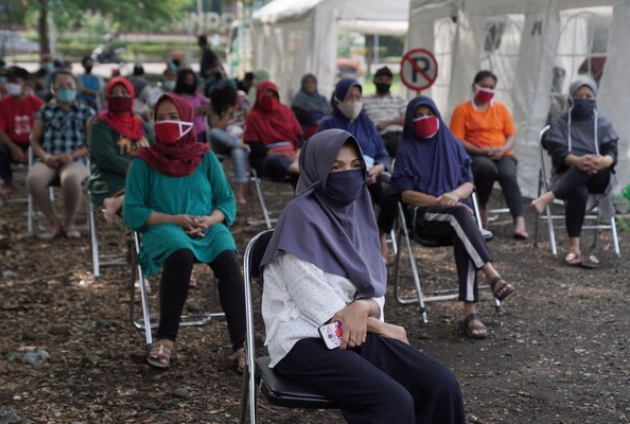 Indonesia reported a record surge in new coronavirus infections, taking the total cases to more than 15,000 as the world's fourth-most populous nation struggled to contain the pandemic's spread.

The number of new cases rose by 689 in the past 24 hours, taking the overall tally to 15,438, Achmad Yurianto, a spokesman for the government task force on covid-19, said on Wednesday. Twenty one people succumbed to the virus, taking the death toll from the pandemic to 1,028, he said.

More than 33,000 people were suspected of contracting the virus and exhibiting symptoms but still awaiting clinical confirmation, an increase from 32,147 on Tuesday. There were more than 256,000 people under observation nationwide, Yurianto said, adding virus tests would be ramped up in more hospitals across the nation in the coming days.

The spike in infections may delay plans to reopen Southeast Asia's largest economy from as early as next month with President Joko Widodo urging caution in lifting partial lockdowns covering almost 100 million people in a string of regions and cities. Authorities are ramping up testing as there are also fears of a second wave of infections from the return of thousands of migrant workers and cruise-ship employees in the coming weeks.

The number of infections in Jakarta, the epicenter of the country's outbreak, jumped to 5,554 cases with deaths totaling 449. East Java province, home to the nation's second-largest city, Surabaya, reported 103 new cases, taking the total to 1,772. PT Hanjaya Mandala Sampoerna, a unit of a unit of Philip Morris International Inc., has closed two of its factories in the province after dozens of workers were tested positive for the virus.

West Java, a region of about 50 million people, may consider easing large scale social distancing rules if the declining trend in new cases and fatalities sustained, Governor Ridwan Kamil said in a statement. About 63% of the province, adjacent to capital Jakarta, may be allowed to resume normal economic activities from early June subject to strict health protocols, he said.