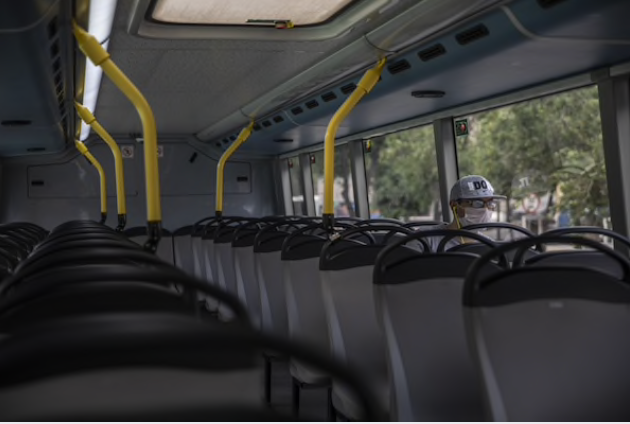 A passenger wearing a protective mask sits in a nearly empty public bus in Mexico City on May 5, 2020. MUST CREDIT: Bloomberg photo by Alejandro Cegarra.

Mexico's auto, construction and mining sectors have been cleared to restart operations beginning Monday, a decision that comes just a day after the government reported record deaths from the coronavirus.

In a Wednesday news conference, Economy Minister Graciela Marquez laid out plans to reopen the Mexican economy in stages, starting with areas of the country where cases of virus have not been reported.

President Andres Manuel Lopez Obrador is faced with a tough choice as Latin America's second-biggest economy tips into a recession that's likely to be far deeper than the devastating Tequila Crisis of the mid-1990s. While a reopening may alleviate some of the strain on the economy, the decision also runs the real risk of fanning the pandemic, leading to an even greater economic disruption, some economists say.

"The contraction would be more contained" if this reopening is successful, said Marco Oviedo, chief Latin America economist for Barclays Plc. "The problem is the data. It seems to be inconclusive on the situation."

With a shutdown of only two months, the economy may contract around 6%, less than the 7.5% economists expect, but if activity needs to be stalled again, the recession could climb to about 10%, Oviedo said.

Mexico has been quick to say that measures to protect worker health must accompany the reopening. Plants that continued to operate in late March were hit by protests in Ciudad Juarez by workers fearful over their health and saftey.

"Starting May 18, essential activities will establish strict protection protocols for all workers," said a statement published in the government's official gazette.

Gustavo Rangel, the chief Latin America economist at ING Financial Markets in New York, noted that for manufacturers the months of near-zero output inflicted steep losses. While the reopening will be positive, Rangel noted that it will happen slowly and under strict health precautions.

"It's a complicated position," Rangel said in an interview. "With auto production dropping close to zero in April -- in Mexico and Brazil -- and for most or all of May, it's clear that the economic impact of the crisis will be very severe."

On Tuesday evening, Mexico's Health Ministry reported 353 new covid-19 deaths, a daily record for the country that brought the total to 3,926. Total confirmed cases rose to 38,324, though Deputy Health Minister Hugo Lopez-Gatell said that the actual number may be as much as eight times higher. He's also said that in recent days there are signs the rate of contagion has begun to slow.

Standing alongside Lopez Obrador, Marquez said close to 300 municipalities that have no patients will reopen businesses and schools starting May 18, and those with higher cases will return at the start of June.

"We will expand essential activities from May 18 with construction, mining, and transportation manufacturing," said Marquez.

The decision adds automakers, construction companies and mining to the list of essential activities amid international pressure to reopen global supply chains that depend on Mexico.

Restarting Mexico production of autos and auto parts are seen by U.S. automakers as especially crucial in order for them to resume their own manufacturing.