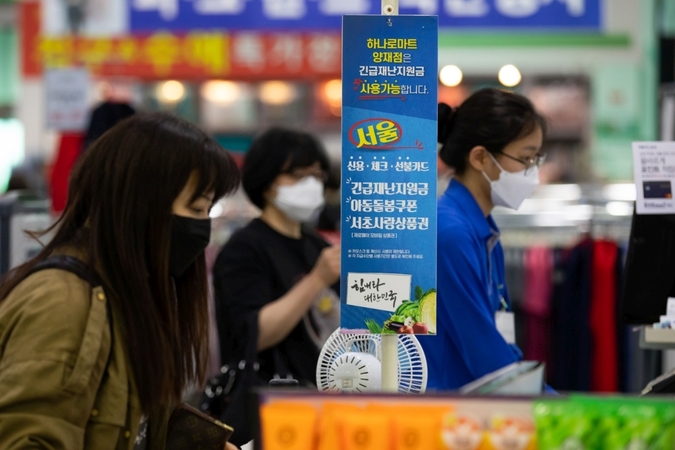 A notice informing about emergency disaster relief funds is displayed at a checkout counter of a Hanaro Mart supermarket in Seoul, South Korea, on May 14, 2020. MUST CREDIT: Bloomberg photo by SeongJoon Cho.

An elderly woman with no travel history. An unexpected flare-up in a nightclub. A swelling cluster in towns near international borders with no discernible source.

After containing their outbreaks through measures from strict lockdowns to rapid testing regimes, the Asian economies that have seen some of the most success in quelling the coronavirus -- Hong Kong, South Korea and China -- are now facing resurgences that underscore how it may be nearly impossible to eradicate it.

It's a painful reminder that as countries open up again and people resume normal life, untraceable flare-ups even after an extended lull in cases are likely. Scientists have warned that the disease may never go away, because it lurks in some people without causing any outward signs of sickness.

"Given the asymptomatic population, these cases are going to emerge from unexpected sources," said Nicholas Thomas, an associate professor in public health at the City University of Hong Kong. "It is inevitable that the restarting of societies is going to lead to more cases emerging."

In Hong Kong, a 66-year-old patient with no recent travel history ended the city's much-envied 23-day streak of zero local cases this week. Some of her family members have now been confirmed to be infected as well, and fears are growing that the woman may have seeded more infections as she moved around Hong Kong's dense city streets before being detected.

On the Chinese mainland, an outbreak of more than 20 new infections in northeastern China has forced authorities to impose movement restrictions in two cities reminiscent of the lockdown placed on Wuhan, the city where the deadly virus first emerged. Schools that had just re-opened to students were closed again in three Chinese cities with a total population of 13 million people.

Not far away from China's fresh outbreak, South Korea has identified more than 100 new cases from several nightclubs frequented by gay customers. Health officials are trying to test more than 5,500 people who visited the clubs since late April, but some fear coming forward given the country's lingering homophobia. The outbreak threatens to test a virus strategy that has gained praise around the world for containing the virus without strict lockdown measures or disruption.

"It's now proven that the epidemic has a very long tail," Wu Zunyou, the chief epidemiologist of the Chinese Center for Disease Control and Prevention, or CDC, said on state television earlier this week.

There's a growing consensus that the virus won't just go away, unlike its close cousin that caused the Severe Acute Respiratory Syndrome outbreak in 2003 that infected some 8,000 people in Asia.

People who contracted SARS were immediately and visibly ill, and once they were quarantined for treatment, transmission was halted. But the new coronavirus manifests in many people with few, no, or uncommon symptoms, thus ensuring that hidden chains of transmission endure and cases will likely spike seasonally, like with the flu.

Moreover, people infected with SARS were not contagious during the virus's incubation period or even in their early days of being sick. In contrast, the new virus doesn't necessarily make people sick but can easily transmit while it is still incubating, making early detection and containment difficult.

"We have to find ways to live with the virus for now, and this is the new normal," said Takeshi Kasai, the World Health Organization's regional director for the western pacific in a briefing on Thursday. "As long as the virus is circulating in this inter-connected world, and until we have a safe and effective vaccine, everybody remains at risk."

More than a hundred vaccines are in development globally, but experts say it could take at least a year until any are ready for use.

Complicating containment efforts, second waves are proving even harder to trace. It remains a mystery to epidemiologists in China how a 45-year-old laundry worker at a local police station in the northern Chinese city of Shulan became infected earlier this month, setting off a chain of over 20 infections.

According to the China CDC's Wu, she may not even be the first infection in the chain given differing incubation periods. "The laundry woman could have fallen sick after two to three days while the real source is only sick after seven or eight days," he said. "In that case it's very hard to tell exactly who infected whom."

Health officials are now conducting genetic sequencing for the virus obtained from the new cluster of patients and will compare it with the strain found in infected travelers returning from Russia to determine if they're related, according to Wu.

There's also suspicion that the cluster could stem from North Korea given the area's proximity to China's border with the reclusive nation. North Korea has yet to confirm any Covid-19 infections, but the U.S. military said it suspects there are cases, and Kim Jong Un's regime has accepted help from other nations to fight the virus.

South Korea has been widely lauded for controlling its outbreak without resorting to oppressive restrictions over its people. But its envied strategy of mass and rapid testing - which slows the virus's spread while keeping mortality low -- may have now reached its limit.

More than half of the club-goers South Korean health authorities want to test remain out of reach and some are not coming forward due to the fear of being outed as gay.

Back in China's Wuhan, the emergence of six local cases this month prompted the city to embark on an ambitious task: prepare for testing its entire population of 11 million in ten days.

Despite their swift responses and abundance of resources like testing kits, which some other countries still struggle with, Asian nations could be more vulnerable to a resurgence given how most people live in crowded apartment blocks.

"The high levels of population density - especially in public housing estates - means that any virus has multiple sources for transmission within highly confined geographical areas," City University of Hong Kong's Thomas said. "This is the challenge that Asia faces far more so than the rest of the world."