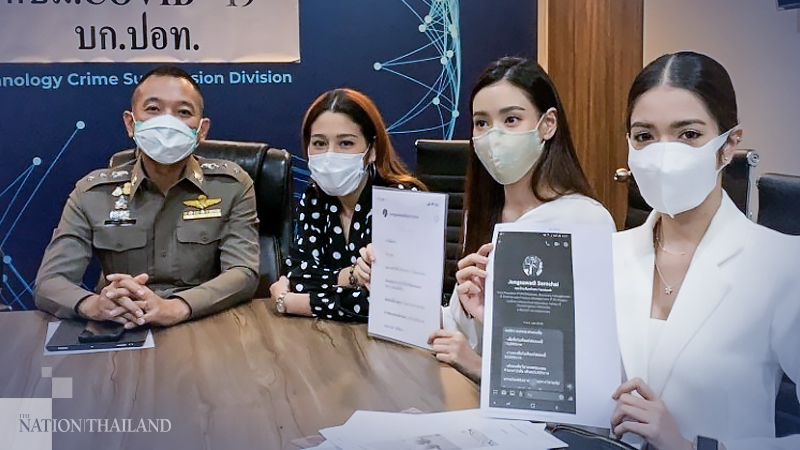 Three actresses on Thursday (May 14) have accused an unknown individual of sexual harassment on social media.

Nattharinee said that the suspect had messaged her on Facebook and offered Bt1.2 million cash for sleeping with him three times a month. He had also tried to make video calls frequently. “I tried to block him but he said he has several fake accounts and will continue to call until I accept his offer,” she added.

Pimpawee said she was harassed in a similar manner, as a suspect messaged her on Instagram offering Bt1 million in exchange for sex.

Patsita said a suspect had messaged her on Facebook and asked her to mail him used underwear and pubic hairs to his address.

The plaintiffs speculated that the suspect might be the same person as all messages came from an account of a man named Jongsawat (last name withheld), whom they reached out to. He claimed that his information was stolen to create fake accounts. Jongsawat was also present at the TCSD to give his statement.

TCSD deputy chief Pol Colonel Siriwat Deephor said that sexual harassment is a violation of the criminal code Section 397 with punishment of maximum one month imprisonment and a Bt10,000 fine. “Also, creating a fake social media account is a violation of Computer-related Crime Act Section 14 with maximum punishment of five years imprisonment or a Bt100,000 fine,” he added. “TCSD will investigate this matter as well as question the owner of the said account to find the culprit.”