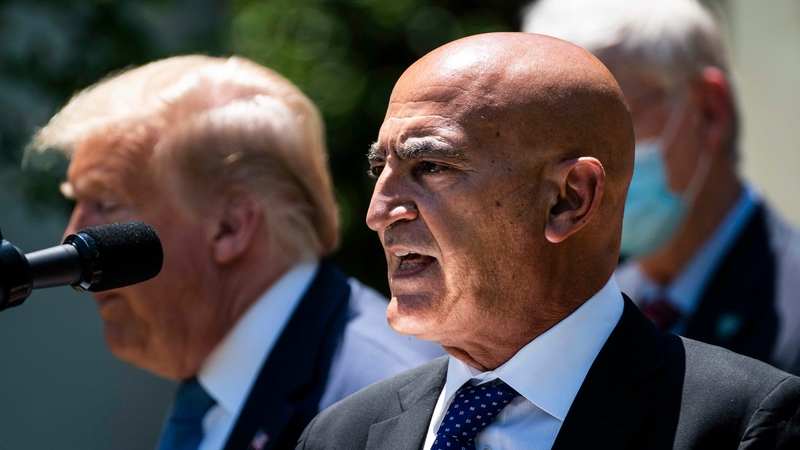 Moncef Slaoui, a former GlaxoSmithKline executive, speaks during a vaccine development event in the Rose Garden at the White House on Friday with President Trump. PHOTO CREDIT: Washington Post photo by Jabin Botsford

WASHINGTON - President Donald Trump formally unveiled an initiative Friday afternoon aimed at making hundreds of millions of doses of a coronavirus vaccine broadly available by year's end - a goal that many scientists say is unrealistic and could even backfire by shortchanging safety and undermining faith in vaccines more broadly.

The Rose Garden news conference added to a week of confusing and contradictory remarks about the prospects and timeline for a vaccine, which is seen as the key to returning to normal life. A day earlier, a former top U.S. vaccine official testified before Congress that he was doubtful about the 12-to-18-month time-frame frequently touted as a goal. The head of the National Institute of Allergy and Infectious Diseases testified Tuesday said that 12 to 18 months was possible, but there was no guarantee a vaccine would work at all.

But Trump and other officials projected certainty Friday that an effective vaccine would be widely available by year's end from among 14 promising candidates that had been winnowed from a field of more than 100. The chief scientist of the new initiative, pharmaceutical industry veteran Moncef Slaoui, even teased that he had seen early clinical data from an unspecified vaccine trial that gave him hope.

"This data made me feel even more confident that we will be able to deliver a few hundred million doses of vaccine by the end of 2020," said Slaoui, who was chosen in a selection process that heavily involved Trump's son-in-law, Jared Kushner and White House coronavirus response coordinator Deborah Birx, according to two administration officials.

Outside scientists said it was dangerous to set public expectations that a vaccine could be available by any deadline, given the many scientific unknowns, and the fact that the first candidates are just now being injected into humans. It was unclear which vaccine trial Slaoui was referring to, and the initial small safety trials underway are not designed to show whether a vaccine actually works.

"It's unfair to the American public to have science by news release - or in this case, 'I've taken a look behind the curtain and I've seen something good, and you have to trust me.' If there are data, let's see them,'" said Paul Offit, chief of the division of infectious diseases at Children's Hospital of Philadelphia. "We have a fragile confidence in vaccines in this country. And we need to manage expectations."

Offit, who is helping advise the U.S. vaccine effort, said the timeline presented by the administration is premature. Scientists still do not know which of several vaccine technologies will work, or what level of immune response signals that someone is immune.

Peter Jay Hotez, dean for the National School of Tropical Medicine at Baylor College of Medicine, said that with some large trials likely to begin this summer, the most reasonable timeline for proving a vaccine safe and effective would be the second half of next year - and even that would be "an absolute record."

A number of senior administration officials said on the condition of anonymity that they are also skeptical of the president's timeline, but that Trump wanted to provide "hope." Birx has gently told the president it will be more difficult than he thinks to create a vaccine quickly.

Manufacturing is one time-consuming aspect of making vaccines, but a bigger reason they take a long time to develop is because of how hard the science is - and how high the safety and effectiveness standards are. Unlike a rare cancer treatment, or a drug for a debilitating disease, vaccines are given to healthy people, and there is little tolerance for side effects or risks.

Developing a vaccine for the coronavirus is an added challenge because the virus just showed up in the human population this winter, and scientists are continuing to learn how it affects the body.

The leading candidates in the U.S. effort so far are an experiment in every sense of the word, drawing on exciting new technologies that have never before been used in an approved vaccine, meaning there's no real long-term experience on safety and effectiveness - even against other diseases.

Scientists can measure an immune response in people's blood, but they still do not know what level of response gives a person immunity or for how long. They also know that vaccines work differently in different people - the immune responses of older people, for example, tend to be less robust than in younger people - and they will need to test possible vaccines in diverse populations.

Researchers are putting experimental vaccines into human tests before they fully know the answer to most of these questions. Phase one trials that test safety are already happening. The next round will test the vaccine in larger groups of people, and will begin to show whether it is effective. But it is the large, phase three safety trials that will be the strongest indicator of whether a vaccine works and has side effects. These trials traditionally can involve tens of thousands of people and take years, a process that will almost certainly be abridged in this case.

It's unclear exactly how the initiative, called Operation Warp Speed, will work given the federal government already has vaccine efforts underway, including a public-private partnership spearheaded by the National Institutes of Health, as well as hundreds of millions in funding going to various drug companies from the Biomedical Advanced Research Development Agency.

Slaoui formerly led vaccine development at GlaxoSmithKline and was praised by Trump as "a world-renowned immunologist who helped create 14 new vaccines." He will work with Army Gen. Gustave Perna, the commander of U.S. Army Materiel Command, which manages supply chain and logistics for the Army.

But practical questions about what he will do - and how he will manage any potential conflicts of interest - remain given that companies he has been connected to are now vying for government dollars.

"There is a need for coordination and a new czar can coordinate industry, the White House, HHS, NIH, BARDA" and other agencies within the Health and Human Services Department, said a senior HHS official who spoke on the condition of anonymity because he wasn't authorized to discuss the subject. But "to bring in a total outsider, with no government experience, that's a tall order in a crisis."

Peter Lurie, a former top FDA official who is now president of the Center for Science in the Public Interest, said that given Slaoui's history as a pharmaceutical executive, the administration will have to put procedures in place to ensure one product isn't favored over another. "The administration's history of self- dealing and the like is not a pretty picture," he said.

Slaoui resigned from the board of biotech company Moderna on Friday, one of the companies with the most advanced effort to create a vaccine in partnership with the U.S. government. He was paid $490,000 last year, according to company filings.

The Warp Speed effort will be divided into two parts - one focusing on vaccines, the other on treatments. The vaccine arm will be headed by Peter Marks, director of the Food and Drug Administration's Center for Biologics Evaluation and Research, who has worked in the pharmaceutical industry and academic medicine. An oncologist, he is known for overseeing FDA reviews of complex treatments, such as CAR T-cell therapy for advanced cancers.

Overseeing treatments will be Janet Woodcock, director of the agency's Center for Drug Evaluation and Research. A doctor, Woodcock is known for her broad experience and expertise in clinical-trial design.

Getting the regulators - the people who will have the ultimate say in whether the products are approved by the FDA - involved on the ground floor drew both concern and praise.

"I would prefer to see the FDA at more arms' length," said Lurie. "I think it's appropriate for the FDA to engage with manufacturers with vaccine candidates to explain what they will need so reviews can be expedited. But I think it's a bad look for the FDA to be in the same room with a project that emphasizes speed."

Others said it would be up to respected regulators like Marks to instruct the administration on the need for gathering data that show vaccines are safe and effective - and to make sure that data was public so that experts could assess it.

"The White House seems to see this as a problem in scale up and manufacturing. They see this as the same problem as the ventilator problem and the diagnostic testing problem - they see it as a manufacturing issue," Hotez said. "I'm really pleased they brought in some good people. They are the ones that are going to explain to the White House that the biggest issue is taking the time to collect enough data . . . for all the vaccines to see which one are both safe and effective."

In a May 4 online forum hosted by Axios, Marks said, "Nobody is looking to skip any parts of the development program to lead to a safe and effective vaccine. We have to make sure that whatever comes out of this process meets our high standards for safety and efficacy for vaccines."

He added, "That said, in this particular crisis, we need to try to move through very quickly to get there, working meticulously, because there is just so much at stake here."