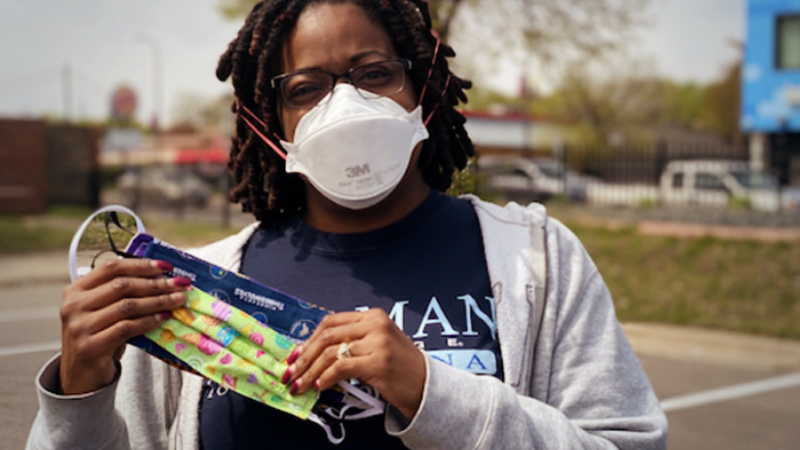 Schoolteacher DeAndra Knighten holds the face masks she got for her herself, her daughter and her husband at a May 9, 2020, event in Minneapolis where activists distributed masks intended to help protect the African American community from covid-19. MUST CREDIT: Photo for The Washington Post by Jared Goyette

MINNEAPOLIS - The volunteers gather every Saturday in a grocery store parking lot on the north side of town. They start with a pastor and a prayer, then set up their tables and bring out their bags of homemade masks and bottles of hand sanitizer. For the next few hours, they'll offer both for no charge to shoppers and passing cars.

Theirs is a mission to save lives, but it's also a self-help movement. The black community here, like African American communities in cities nationwide, is being hit especially hard by the coronavirus pandemic. And some people have decided that they can't wait for others to come to the rescue.

"We didn't see our local government stepping up to provide masks to people," said activist and civil rights lawyer Nekima Levy Armstrong, one of the organizers in Minneapolis. "So we said we're going to roll up our sleeves, and we're going to do it ourselves."

The numbers are stark. Data from all 50 states, compiled by the APM Research Lab, show that the mortality rate from the coronavirus is more than twice as high for black Americans as for other groups, including 2.6 times higher than for whites.

In Minnesota, where blacks are just under 7% of the population, they represent 17% of coronavirus cases and nearly one in five hospitalizations, according to statistics released this month by the state health commissioner.

With no clear federal plan to address the most impacted communities, and with local government efforts stretched thin, black activists across the country are trying to fill the gap. An NAACP chapter in Norwalk, Conn., distributed masks to public housing tenants, while a chapter in Long Beach, Calif., gave away masks donated by a Korean business.

The work of these groups has become more urgent as Minnesota and other states prepare to lift or loosen their stay-at-home orders. With health experts warning that the virus could surge again in the fall, some fear that minority communities could face an even heavier toll.

The self-funded, all-volunteer mobilization here grew out of the Racial Justice Network, a grass-roots advocacy group Armstrong founded in 2018. It started on April 8 by giving away 150 masks, but as word got out, participation grew. The effort now draws from a pool of about 15 mask makers, with a dozen or so people showing up on Saturdays, donning their own protection and handing out masks for several hours. A week ago, volunteers went through 600 of them.

Kingdemetrius Pendleton, a photographer known for documenting protests and community events, sews masks in the basement of his home in St. Paul. He makes about 10 a day. The most challenging part has been finding elastic for the straps that hold a mask in place; it's in short supply in stores. But his mantra: "Where there is a will, there is way to make your mask."

Pendleton's creations are unique - West African patterns with bright dashes of orange, red and green. He likens his masks to the graduation gowns that many black students make distinctive by adding kente-cloth stoles. "It just stands out. It pops, and it says something," he said.

Many of the people picking up masks last weekend were front-line workers whose jobs put them at higher risk. Dexter Beasley, a bus driver from St. Paul, got Minnesota Vikings-themed masks for himself and his fiancee. Arnold Lowry, who works at a recycling plant, happened upon the giveaway while out shopping for Mother's Day. He walked away happily with his own football-themed mask and one in a black-and-red flower pattern for his partner.

Krystal Thomas showed up with her three children, who are 4, 7 and 12. She had tried to buy masks online, but she lost her job just before the pandemic hit and couldn't afford them. Despite a rainy forecast, she rushed to the supermarket parking lot when she saw a social media post about the event. She was too late to get any kids' masks and decided to improvise with the four she took home. "I didn't know if we were going to make it," she said.

Several hours later, another homegrown distribution event in neighboring St. Paul also ran out of masks fast in an area with a heavy concentration of black and Asian American residents, including many Hmong refugee families.

Hoang Murphy, himself the son of refugees from Vietnam, was among the volunteers there with Sanitize the Cities. He moved fast, trying to catch as many people as possible. In one burst, he found ready takers in an older Asian woman, a black woman, a man from El Salvador and a pair of landscapers, one Latino and the other white, who pulled up in a pickup truck and rolled down the passenger-side window to pick up two masks for themselves.

Murphy, who runs a nonprofit and is campaigning for a state legislative seat, kept going even as rain started falling. "We're only as safe as our most vulnerable neighbor," he said. "It doesn't matter if I'm healthy if you are not."

Mayor Melvin Carter, D, elected in 2017 as St. Paul's first black mayor, has set up a working group of municipal staff and community leaders to coordinate its coronavirus response in the African American community. Like other cities with populations under 500,000, St. Paul hasn't received any aid through the Cares Act that Congress passed to counter the pandemic. Volunteers, he stressed, just can't do enough to meet the need.

"The frustration that I have, that many people share, is that for all these articles and all this reporting about the disparate impact on our communities of color, we see nothing in regards a national plan to address that or emergency funding to address that on the national level," Carter said.

In Minneapolis, Armstrong says her group will continue its work as long as necessary. Gov. Tim Walz, D, issued a new order Wednesday night that will allow many small businesses to open Monday, provided that they follow social distancing recommendations and have a coronavirus preparedness plan. Bars, barbershops and hair salons may be allowed to partially reopen June 1.

Such parameters are problematic and can actually contribute to racial inequities, said Susan Gooden, dean of the L. Douglas Wilder School of Government and Public Affairs at Virginia Commonwealth University.

"The concept of social distance is in itself a privilege. To be able to socially distance, you have to be able to have access to resources," said Gooden, who has been researching the data on equity and covid-19, the disease caused by the virus. Working from home isn't an option for individuals in manufacturing or retail, she noted. Similarly, the cost of home grocery delivery is out of reach for many.

"We've got those who are able to socially distance, who . . . are now largely out of the equation to have the disease spread to them. And so what's left then is the remaining vulnerable population," she said.

Beasley expected his new mask to work better than the ones he had been using while driving his bus route, and he was glad for both his health and that of his passengers. "I'm trying to make sure that passengers who get on are safe," he said.

Above all, he was grateful for activists' efforts to get masks into the hands of people who urgently need them. He knows several individuals who have been infected with coronavirus and a couple who have died.

"The work they're doing is very important," he said, "because this virus is out there."