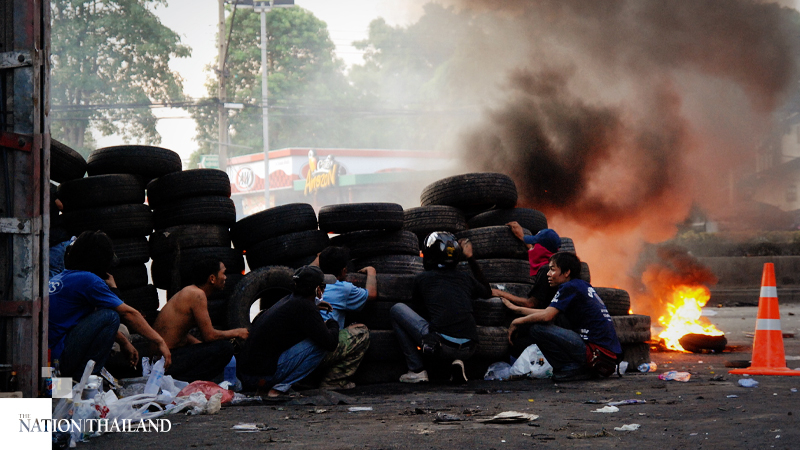 As the country marks the 10th anniversary of political protests that erupted in violence, a pro-democracy group is campaigning to know the truth behind the tragic events.

The then-Abhisit Vejjajiva administration ordered security forces to crack down on protesters, resulting in scores of lives being lost.

Meanwhile, state officials are threatening legal action against those who have campaigned for truth in recent days over laser light projections of a "political message" on symbolic buildings.

The campaign for truth demonstrates the unresolved and deep political divide in the prolonged political conflict between the military and conservative faction on one side and the pro-democracy groups on the other.

“Neither political reconciliation, nor reform have made any progress,” said Gothom Arya, adviser to Mahidol University’s Institute of Human Rights and Peace Studies.

While one side claims progress, the other side refuses to accept such claims, he added.

Trading accusations against each other will not lead to constructive engagement, he lamented.

People have the right to criticise former PM Abhisit Vejjajiva, but demanding that he and others stand trial might be going too far, he said, referring to the bloody crackdown on red-shirt protesters 10 years ago.

The Covid-19 crisis has also slowed the efforts to amend the 2017 Constitution that could lead to political reconciliation. However, the virus crisis may narrow the gap between the rivals' political stands, he said.

Gothom was optimistic that Thailand could move towards political reconciliation should the government and the House of Representatives could work it out together, but large-scale participation from the public is also needed.

Titipol Phakdeewanich, dean of Ubon Ratchathani University’s Faculty of Political Science, said that acceptance of differences would be most important in the democratic process.

Reconciliation in Thailand's context only forces people to accept the idea of national unity, he argued.

Real political reconciliation must have an element of accepting differences which will accommodate all the different interested groups of people to live together peacefully, he said.

Abhisit did not take any responsibility or accountability for the crackdown, said Titipol.

People have the right to campaign for the facts of the bloody crackdown, as so far people have only got the official account. Previous fact-finding efforts were only attempts to whitewash the previous government, he added.

Meanwhile, Anusorn Tamajai, chairman of Pridi Banomyong Institute, said that reconciliation could be achieved by knowing the truth about past political incidents. Those who had committed wrongdoings must be tried in court while those who were punished without justification must be compensated by the state. Then it should be followed by political amnesty, he said. Reconciliation is only the first step, but the ultimate goal is to become a fraternity, he added.