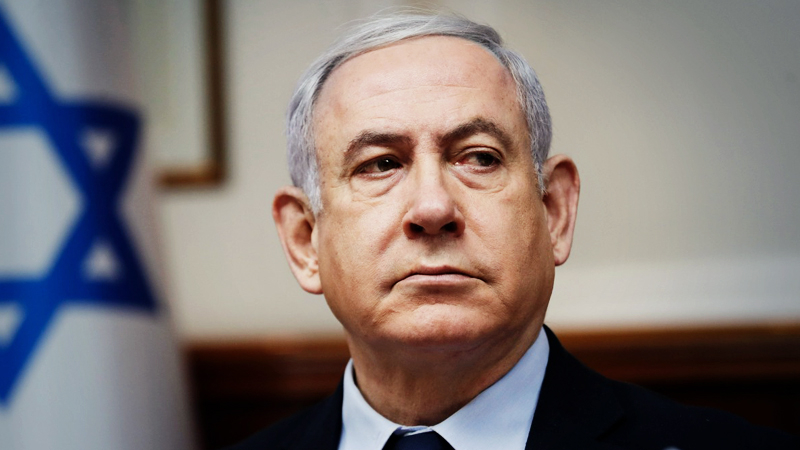 The ceremony, which took place in Israel's parliament, the Knesset, in accordance with coronavirus social distancing directives, marked a fifth term for Netanyahu - his fourth consecutively - and the first time an Israeli leader indicted on criminal charges will formally lead the country.

Netanyahu opened the televised ceremony, followed by Benny Gantz, a onetime rival turned partner, who will serve in the specially created role of alternate prime minister, as well as defense minister, for the first 18 months of the government's life before taking over the top job for an equal term.

The rotation is part of a complicated and somewhat unprecedented coalition agreement between Netanyahu's right-wing bloc of political parties and Gantz's much smaller Blue and White faction. Under the deal, both leaders will be responsible for the ministers from his own faction and have the power to veto certain government decisions made by the other side.

It is an arrangement that has also produced the largest, and perhaps most politically broad, government in Israel's history that might spare Israelis another round of elections for at least three years but could also hamper its ability to function.

Thirty-four ministers and around 16 deputy ministers, some in newly created offices, will manage the country as it emerges from a two-month covid-19 lockdown facing a deepening economic crisis and rising tension with the Palestinians.

"Benny, we worked well together during Operation Protective Edge, me as prime minister, you as chief of staff and I am sure we will work well together in this new government serving all of Israel's citizens," said Netanyahu, referring to the 2014 war Israel fought with Hamas in Gaza. Gantz was military chief of staff at the time.

Netanyahu said it was an important day for Israel that would prevent another round of costly elections and establish a unity government to tackle the fallout of the coronavirus crisis.

"Because of the pandemic, we have decided to set our differences aside and fight together shoulder to shoulder against this massive challenge," he said.

Gantz said the new government would end Israel's worst political crisis and "usher in a new era of peace and reconciliation" for Israeli citizens.

"The people told us: Stop fighting between you and start working for us," said Gantz.

The swearing in of what critics have called a bloated and indulgent government as unemployment hit its highest levels in Israel's 72-year history, was meant to have taken place on Thursday but discord within Netanyahu's Likud party over the distribution of senior portfolios forced him to request a little more time.

Knesset liaison minister and community development minister were two of the newly formed offices aimed to compensate loyal coalition partners and senior members of his party for supporting Netanyahu, whose trial in three criminal cases centered on bribery, fraud and breach is due to start on May 24.

Some believe that for Netanyahu, who last July surpassed the country's founding premier, David Ben Gurion, as the longest serving Israeli prime minister, this could mark his final term in power and that his current calculations are being guided on a desire to leave with his legacy intact.

On his way to forming the new government, Netanyahu, who has been called a political Houdini, skillfully outmaneuvered almost all of his political rivals. Initially, it was Gantz who had been tasked with forming the next government, but after failing to pull together enough support for a coalition, he shocked his political partners and supporters when he announced last month that he was forming an emergency unity government with Netanyahu. At the time, he said it was to deal with the fallout from the covid-19 crisis and avoid a fourth general election.

Gantz's surprise move led to the dissolution of his Blue and White faction and propelled his one-time partner, Yair Lapid, into the opposition. Netanyahu also forged coalition deals with individual political figures, splitting both a party to his left on the political spectrum and his right.

Tal Schneider, senior diplomatic and political correspondent for the Israeli business newspaper Globes, said the size of the government and the invention of new cabinet posts was "an insult to the public in such dire economic times."

She also pointed out that the new government could have some serious problems functioning.

"The mutual veto power between Netanyahu and Gantz makes this government highly problematic. Nothing can be done without the agreement of both sides," said Schneider. "Gantz might agree with Netanyahu initially but at a certain point he will have to stand up and show that he is achieving something."