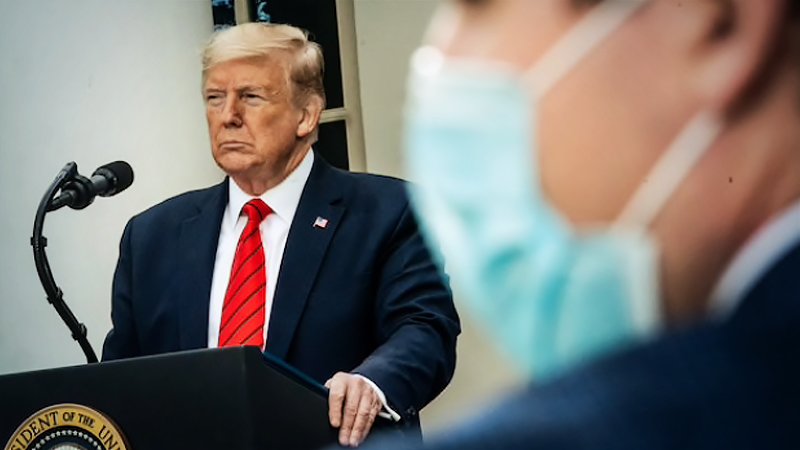 WASHINGTON - President Donald Trump on Monday intensified his push for businesses to reopen as quickly as possible, but companies and cities continued to wait for the disbursement of unspent bailout funds and remain unsure what to expect as rules and programs continue to shift.

Through tweets and a meeting with restaurant executives at the White House, Trump tried to create a new sense of urgency about jump-starting the economy, which has suffered huge losses the past several months during the coronavirus pandemic. He told restaurant executives at a White House meeting that he was open to giving businesses more flexibility in how they use taxpayer funds so they could delay rehiring workers as quickly as originally required.

But while the Treasury Department has rushed to implement some stimulus programs, such as sending $1,200 checks to 140 million households and mobilizing a small-business lending program, other congressionally approved assistance funds are off to a much slower start. The Congressional Oversight Commission, a new body, released a report on Monday, finding that the Treasury Department had spent little of a $500 billion fund that it created through the Cares Act in March to help businesses and local governments, even though many of these entities have asked for immediate help.

Senators are expected to press Treasury Secretary Steven Mnuchin and Federal Reserve Chairman Jerome Powell about this during a hearing Tuesday morning.

"If it doesn't get out in a timely fashion, it's not going to achieve the goal behind its creation," said Sen. Patrick Toomey, R-Pa., a member of the new commission.

This tension was evident Monday, when the Dow Jones industrial average rallied 912 points, or 3.9%, on optimism that a vaccine could be within reach and that the economy is set for a rebound. But most of the recent economic data continues to show an economy facing extreme strains, particularly regarding unemployment and short-term growth.

In Tuesday's hearing, Powell plans to say that the nation is in the midst of an economic crisis "worse than any recession since World War II," according to prepared remarks, and that the central bank's "bold steps" have helped ensure that American families and businesses can borrow cheaply so they do not go bankrupt before the economy can safely reopen.

The $500 billion Treasury Fund created by the Cares Act is supposed to be used to help prop up large segments of the U.S. economy, including airlines, small- and mid-size businesses, larger corporations, and cities and states. The Congressional Oversight Commission was created by the Cares Act to oversee how that $500 billion fund is being used, and the group issued its first report Monday, though it still does not have a leader. That person must be appointed jointly by House Speaker Nancy Pelosi, D-Calif., and Senate Majority Leader Mitch McConnell, R-Ky.

The commission has four other members who were appointed individually by congressional leaders, and they produced a 17-page report Monday that contains mostly questions about how the Treasury fund is going to function.

The report describes the lending facilities the Treasury Department has created to operate through the Federal Reserve; t says only one of them has received funding. It is called the Secondary Market Corporate Credit Facility and is supposed to purchase corporate debt. It has received $37.5 billion.

The $500 billion Treasury fund also set aside $46 billion to make loans and loan guarantees to the airline industry. None of that money has been disbursed. Many firms have said other parts of the Cares Act have helped them remain in business, particularly a separate fund for smaller firms, but a growing number of businesses, particularly those that rely on direct customer interaction, have closed and are not expected to reopen. And others have expressed frustration about the changing terms of government aid programs.

The Treasury Department has announced five lending facilities to disburse other portions of the money, including the Main Street Lending Program, which is supposed to help small and medium-size businesses. Lawmakers have been particularly focused on this program.

The report describes how even before any money from the Main Street program has been lent, the terms of the program have evolved. The changes include increasing the size of loans, eliminating a requirement that companies have to attest they need money "due to the exigent circumstances presented by" the coronavirus, and modifying a requirement that companies make "reasonable efforts" to maintain payroll and retain employees during the term of a loan. Instead, they will be required to make "commercially reasonable efforts" to do so.

Powell is expected to face tough questions about why the Fed has yet to launch the Main Street Lending Facility and why the central bank recently altered the terms of that program to aid companies with up to 15,000 employees, a move some Democrats say mainly benefits struggling oil and gas firms.

Powell and Mnuchin have said they are working rapidly to create the programs as quickly as possible, pointing to the unprecedented speed with which they have already directed hundreds of billions of dollars in aid to businesses and households. A number of programs remain in flux.

Ahead of Tuesday's hearing, top Banking Committee Democrat Sen. Sherrod Brown of Ohio urged Powell and Mnuchin to avoid the mistakes of the small-business Paycheck Protection Program, which was designed to help small businesses but ended up getting tapped by larger ones, and also to be transparent.

"The decisions you make will define the effectiveness of not only the MSLP, but also other lending programs that you develop," Brown wrote. "I urge you to consider fully how you can best serve small and medium sized businesses and their workers and states and municipalities."

There is also a Municipal Liquidity Facility that is supposed to loan money to state and local governments, an issue that has been the topic of intense debate on Capitol Hill and at the White House. The Cares Act allocated a separate $150 billion pot for state and local governments, but governors and Democratic lawmakers have been petitioning for more. Treasury intends to invest $35 billion in the Municipal Liquidity Facility, which can support up to $500 billion in lending, the report says. But none of the money has gone out yet.

The report presented the Treasury Department and the Federal Reserve with a series of questions about risk to taxpayers and how the agencies will assess success or failure of its programs. It also specifically asks when the Main Street and Municipal Liquidity Facilities will begin to function.

"I'm concerned about it taking weeks to get it up and functioning," said Rep. French Hill, R-Ark., another member of the Oversight Commission. He said he hoped Tuesday's hearing would be an opportunity for Powell and Mnuchin to "tell us what you need to do to put them into action."

The Treasury Department declined to comment on the report.

The report underscores the wide discretion the Treasury Department has in using $500 billion in taxpayer money as it sees fit. Congressional Democrats including Sen. Elizabeth Warren, D-Mass., who headed a similar oversight commission after the 2008 financial crisis bailout, have criticized the money as a "slush fund" for corporations.

Aides to Pelosi and McConnell had no update Monday on when that appointment will be made. They appear to have made little progress toward filling the job in the nearly eight weeks since the Cares Act passed. One potential candidate - former Federal Deposit Insurance Corporation chair Sheila Bair - publicly took herself out of the running this month after her name was floated, saying she was too busy with other responsibilities.

The Congressional Oversight Commission is one of a series of overlapping oversight mechanisms created by the $2 trillion Cares Act and separately by Congress, all of which have gotten off to a slow start. The Cares Act also created a special inspector general position to oversee the $500 billion Treasury Fund, but the Senate has not yet confirmed the man named to fill that role.

The Cares Act had many different components, and the $500 billion Treasury fund is just one piece of the law.

Mnuchin and other senior officials have worked aggressively to stand up the legislation's Paycheck Protection Program, which is being run jointly with the Small Business Administration. That program is not covered by the $500 billion fund that was the focus of the commission's report on Monday.

In an example of the constantly shifting playing field around the various programs and their implementation, Trump met Monday with restaurant executives who pressed him to extend the length of small-business loans available under the Paycheck Protection Program from eight weeks to 24 weeks. Trump sounded open to the change, although it's something Congress would likely need to approve.

The Treasury Department also has sent out checks to individual Americans, and the Cares Act provided for an extension of unemployment benefits. More than 30 million Americans have filed for unemployment during the pandemic.