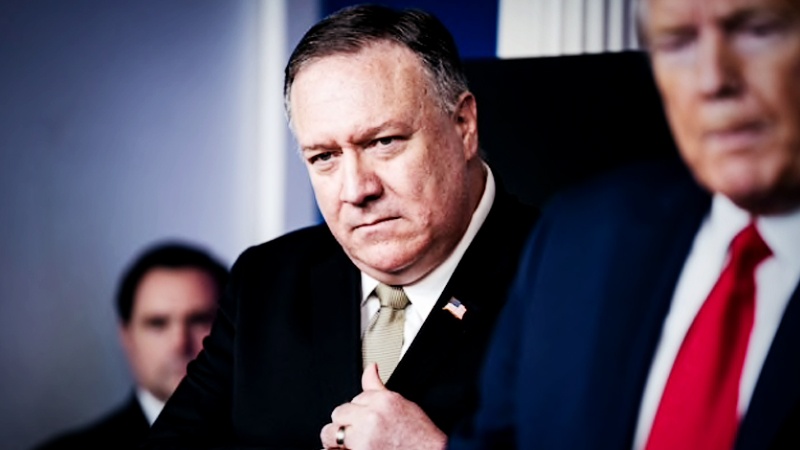 WASHINGTON - Secretary of State Mike Pompeo and his top aides criticized the State Department's ousted internal watchdog Monday, accusing him of mishandling leaks to the media and failing to promote Pompeo's mission statement to employees.

The remarks were an attempt to fill in the gaps in the mysterious firing of Steve Linick by President Donald Trump late Friday night, but they also raised new questions about the dismissal and exposed a divide among State Department employees.

Many career officials viewed Linick as a dogged investigator of malfeasance who cultivated a reputation for diligence and relentlessness. But for the secretary's handpicked advisers who found themselves on the wrong end of his investigations, the former prosecutor could be a source of frustration and embarrassment, said four U.S. officials familiar with the matter.

Pompeo told The Washington Post that he advised Trump to fire Linick because he was not "performing a function" that was "additive for the State Department."

One of Pompeo's top aides, Brian Bulatao, said concern over Linick had grown because of a "pattern of unauthorized disclosures, or leaks," to the news media about investigations that were in their early stages. Bulatao said officials had no evidence that Linick was personally responsible for the leaks but believed that they could taint the outcome of ongoing probes.

Bulatao also said the secretary was frustrated with Linick's indifference to an "ethos statement" Pompeo formulated for employees last year that includes mottos such as "I am a champion of American diplomacy."

The terms of Linick's exit remain contentious. In a letter sent to Congress on Friday, Trump said Linick's removal would be effective in "30 days," giving him time to wind down his investigations. But Linick has since been told that he is physically barred from returning to the State Department even to collect his belongings, complicating his ability to finish his work, said a U.S. official who like others spoke on the condition of anonymity to discuss internal policies.

Linick did not respond to requests for comment sent to his State Department email address.

Pompeo's vague criticisms of Linick have left questions about whether one of the inspector's past or current investigations agitated Pompeo enough to prompt the decision to remove him. Pompeo denied that it was possible for him to retaliate for that reason, because, he said, he is not told about an investigation until just before it is released.

U.S. officials, including Republican members of Congress, are demanding answers for what they view as an extraordinary punitive measure.

On Monday, Sen. Chuck Grassley, R-Iowa, said in a letter to Trump that his explanation of the firing is "not sufficient" to fulfill the Inspector General Reform Act, a law that enshrines the rights of internal investigators. "Please provide a detailed reasoning for the removal of Inspector General Linick no later than June 1," he said.

The nature of Linick's work, which involved interviewing officials and uncovering acts of wrongdoing, means that any investigation could be suspected of causing his downfall - and that his list of enemies is long.

Before he was fired, Linick was investigating an emergency declaration Trump made last year to approve an arms sale to Saudi Arabia, a decision Pompeo approved, said Rep. Eliot Engel, D-N.Y., the top Democrat on the House Foreign Affairs Committee.

The arms transfer had been blocked by a bipartisan group of lawmakers who opposed the killing of Yemeni civilians at the hands of a Saudi-led coalition operating in that country. Engel, who had requested that Linick look into the order, said it was "another reason" Trump may have fired the inspector general.

But there are other potential triggers. Linick, for instance, had also been investigating allegations that a staffer for Pompeo was performing domestic errands and chores for him, such as handling dry cleaning, walking the family dog and making restaurant reservations, said a congressional official familiar with the matter.

Pompeo told The Washington Post that he was not aware that Linick had been investigating that issue. When asked whether the allegations were true, he declined to comment. "I'm not going to answer the host of unsubstantiated allegations about any of that," he said.

Linick also took aim at powerful and connected individuals within the Trump administration, including Robert Pence, a Republican Party donor with close ties to Vice President Mike Pence whom Trump nominated for U.S. ambassador to Finland. Last year, Linick's office wrote that Robert Pence, who is not related to the vice president, had a conflict with his deputy that was not managed "in an appropriate manner, which resulted in a breakdown of trust and communication that complicated the chain of command and contributed to a stressful work environment for Embassy Helsinki staff," among other things.

Another well-connected official Linick took aim at was Brian Hook, the special envoy for Iran, who maintains good relations with Jared Kushner, Trump's son-in-law and adviser. Linick's office found that an Iranian American career civil servant, Sahar Nowrouzzadeh, was retaliated against because of her ethnicity and a perceived political bias. Hook came under scrutiny in the probe because at the time she worked in his office.

The probe's findings were released last fall, which is when Bulatao said the department became particularly frustrated with leaks about inspector general investigations, in particular a Daily Beast report in September focusing on Hook that cited "two government sources involved in carrying out the investigation."

Bulatao said the report deepened the department's skepticism of Linick, though there was no evidence that he was involved in leaking to the website. "You know the IG is normally charged with carrying out the investigation," he said. "It certainly was a very strong finger-pointing at IG Linick's way."

If Linick was targeted because of an investigation, nonpartisan analysts have said, his ouster would probably constitute a violation of laws protecting inspectors.

"If the president has removed the inspector general because of any investigation he is carrying out, that would be contrary to the law," said Ron Neumann, the president of the American Academy of Diplomacy.

Neumann's organization on Monday called for a "more detailed and more complete" explanation of Linick's firing "consistent with the law."

At the State Department, where many diplomats are working from home while trying to juggle personal responsibilities, some diplomats said Linick's ouster further dampens morale.

"It doesn't touch most people directly. But it undermines confidence the rules apply equally to everyone," one official said.

Trump, who is the only official legally capable of firing the inspector general, has largely let Pompeo explain the decision.

"I never heard of him. But I was asked to by the State Department, by Mike," Trump told reporters at the White House.

He suggested that if Pompeo was using his staff to do house chores, it would not be a significant breach.

"Do you mean that he is under investigation because he had someone walk his dog from the government? I don't know. I don't think it sounds like that important," Trump said. "Maybe he's negotiating with Kim Jong Un, OK, about nuclear weapons. They say: 'Please, can you walk my dog? You mind walking my dog? I'm talking to KJU or President Xi [Jinping of China]. Please walk my dog.' . . . The priorities are really screwed up when I read this."